"In the military there are all sorts of ways to say fuck it." 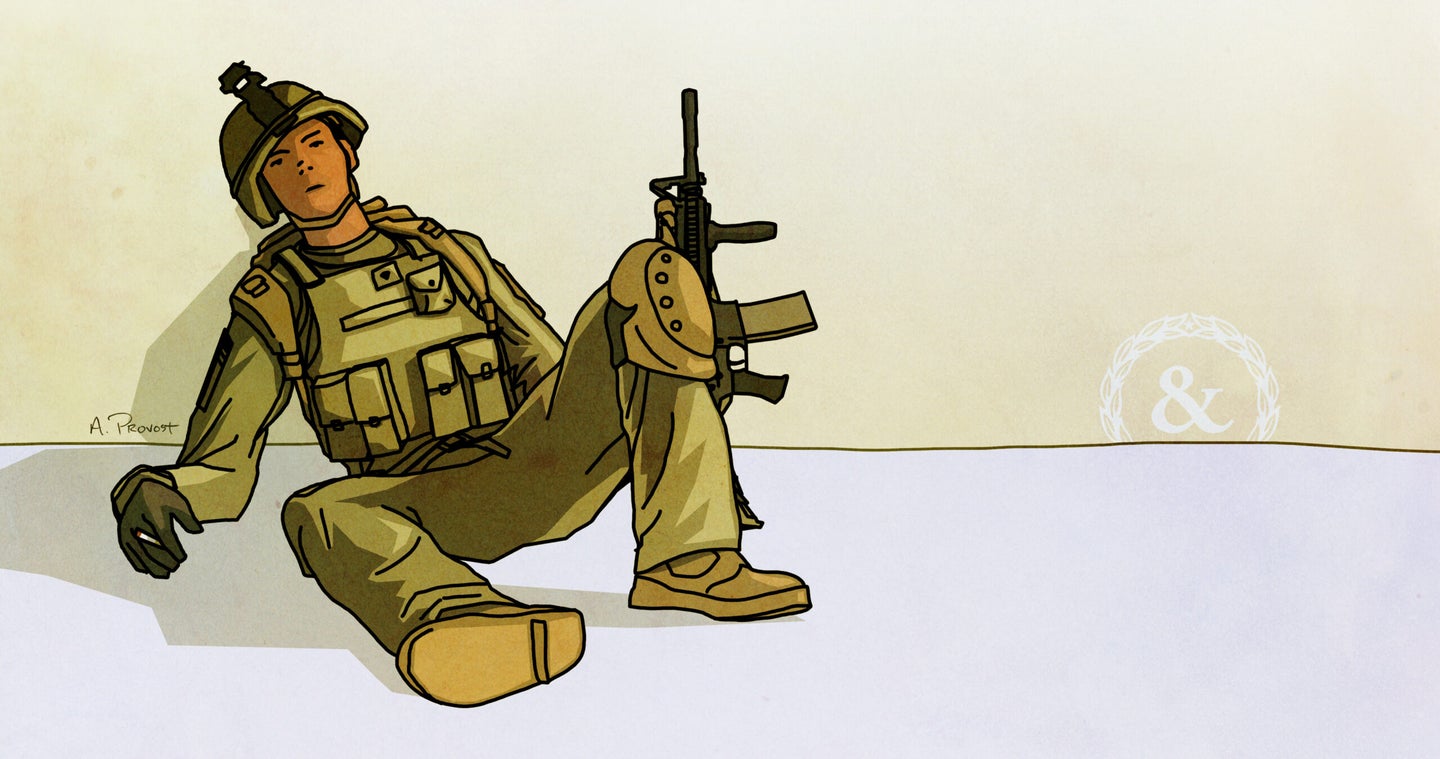 Editor’s note: This excerpt is taken from Wall Street Journal reporter and Marine veteran Ben Kesling’s book Bravo Company: An Afghanistan Deployment and Its Aftermath, which tells the story of the war in Afghanistan through the eyes of a single unit.

It was only after that damnable patrol where Caron died and Lemon lost his arm that Nick Armendariz realized that he’d said to himself, Fuck it.

In the military there are all sorts of ways to say fuck it. There’s the give-up-on-life-and-do-nothing fuck it. That’s when a guy blows his mental fuse and can’t do anything at all. That’s when a guy is messed up on a Catch-22 level, lying in bed until the doctors get called and they pull you out to take you down to the ward. That doesn’t happen too often.

There’s the do-nothing fuck it — the version that doesn’t include giving up on life itself. That’s the goldbricker, malingerer, shirker move, when a guy decides that he isn’t going to do a damn thing and nothing that anybody does to him as punishment will change his mind.

There’s the hold-your-nose-and-complete-a-crappy-task fuck it. This particular flavor of fuck it is the most common in a soldier’s repertoire. Every infantryman experiences it. Its most common incarnation comes when some jerk-off officer assigns a preposterous task, typically requiring hours of backbreaking labor. There’s little else a grunt can do but say fuck it and power through the task. The idiocy of the thing typically remains at the forefront of the grunt’s mind, so he says “Fuck it” regularly to stoke the embers of anger down deep in his belly and to make him forswear any thoughts of reenlistment.

And then there’s a metaphysical fuck it. That one is powerful, indeed. It’s defined by resignation and a sense of inevitability, maybe even of fate, that can only be truly known to a person who has signed a contract, is in the middle of the shittiest place imaginable, and now has to figure out how to deal with all that. The metaphysical fuck it allows a Zen-like acceptance of one’s lot in life and the knowledge that there isn’t a good-goddamn thing to be done about it.

Bear in mind, that abbreviated catalog is just a few of the fuck it variants available to your average soldier, but arguably the most popular among them.

The fuck it Armendariz chose was a combo. His was a mix of the hold-your-nose fuck it along with the metaphysical fuck it, which is actually a spot where a lot of honorable guys end up finding themselves on the fuck it spectrum.

To say fuck it in the way that Armendariz said it doesn’t mean he gave up on doing his job and doing it as best he could. No, he was still a good soldier who was ready to take care of the men around him and complete whatever was asked of him day or night. Instead, it meant he was ready for death or dismemberment in a way he hadn’t been ever before and yet he was going to do his job as best he could despite all that.

It was a true existential reckoning.

And that reckoning, once made, becomes very hard to shake even once a man goes back to the civilian world.

Armen began that 2009 deployment in Helmand as a machine gunner, on the M240G, and for those first few months he was as bored as everyone else on the deployment — maybe more so, because he had a prior action-packed deployment and knew what a fair fight was and he wanted one bad. He wanted to earn his paycheck, wanted to do his job, especially after all those firefights on the previous deployment. That was fun. And it never happened when he was with Bravo Company.

They began the deployment with that dumb training mission in Helmand, where there was no getting into a firefight of any kind. And then they were sent to the Arghandab, where the Taliban were too damn chicken to come out for a fair fight. The Taliban didn’t have the balls. At least, that’s what so many American soldiers like Armen told themselves.

Except an American fair fight really isn’t too fair if viewed objectively. Firefights like those Armen remembered from his last deployment might begin with the two sides shooting rifles at each other, the steadiest hands and truest aim winning out. That seems about as fair as it can get. But as far as the Taliban were concerned, the Americans were always cheating. The Americans got their bullets delivered to them in convoys, bullets with brass cases that never rust, while the Taliban’s rounds might be steel-cased, get all rusted to hell, having been buried out back in a court-yard so the Americans with their dogs and metal detectors and drones and who-knows-what-else couldn’t find them.

Those supposedly fair fights often ended with American artillery raining onto the Taliban position or American helicopters and jets firing rockets, dropping smart bombs. Maybe an American drone intervened with its multimillion-dollar, ever-present eye in the sky looking down at some Talibs armed only with AKs, machine guns, and maybe some mortars.

It’s so easy to be cocky out there and talk about fair fights when you’ve got A-10 attack jets on station ready to swoop in with cannons and rockets and bombs. It’s easy to be cocky when you’ve got encrypted radios that can talk to everyone on the battlefield, to planes, to artillery, to medevac helicopters — all with the touch of a button. The Taliban were often working with Icom-brand radios or something like you’d find at Radio Shack. They were little better than what an American kid might find under the Christmas tree. Everyone on the battlefield could listen in.

It wasn’t uncommon for Taliban commanders to say hello to the Americans they knew were listening in on their conversations.

“Hello, Lieutenant! I hope your family is well and you get to return home to them, Insh’Allah.”

The Americans always talk about wanting a fair fight, mano a mano. But the Taliban know there’s no fair fight and the Americans are a bunch of assholes for thinking combat is some gunfight at the OK Corral, all fair and square.

Nuristan was fun for Armen because it was an American-style fair fight.

On the Arghandab deployment he discovered that there never is a fair fight. Someone always has an advantage in a fight, usually an incredible advantage. This Arghandab stuff seemed a fair fight for the Taliban. Armen’s fun stopped with the IEDs buried in the ground. It wasn’t fair anymore. Not fair for the Americans, at least.

The Taliban had figured out the way to eliminate the American air superiority, the drones, nearly all of it. They planted bombs at night in the thick overgrowth of pomegranate trees and elephant grass and mud of the Arghandab Valley.

Oh shit, Armen figured out, this is what fair looks like when you’re on the other side of it.

Ben Kesling is a correspondent for the Wall Street Journal. He served as a Marine Corps infantry officer in Iraq and Afghanistan.

Excerpted, with permission, from Bravo Company: An Afghanistan Deployment and Its Aftermath by Ben Kesling, Abrams Press. Copyright 2022.