How Team Rubicon’s Veterans Are Providing Disaster Relief In Nepal

Editor’s Note: A version of this post originally appeared on Team Rubicon’s blog. On April 26, Team Rubicon deployed a... 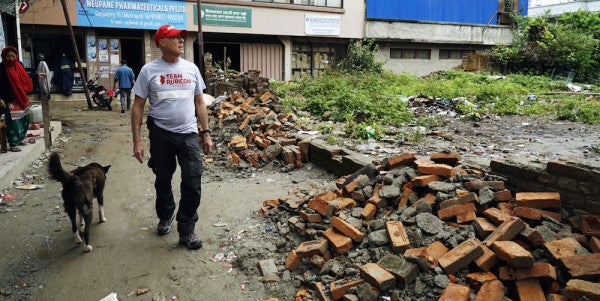 Editor’s Note: A version of this post originally appeared on Team Rubicon’s blog.

On April 26, Team Rubicon deployed a four-man recon team out of Los Angeles to Kathmandu. While most recon teams focus on gathering intelligence and providing input on further deployments, the Tenzing recon team has a slightly different focus.

While many agencies are focusing on search and rescue and life-saving operations, Team Rubicon is tackling the crippling lack of aerial imagery in the affected areas. Generally, disaster relief operations rely on satellite or fixed-wing aircraft imagery to provide up-to-date visuals of disaster zones, but storms and cloud cover are preventing good visuals.

To counter the weather and cloud cover, this team is equipped with unmanned aerial vehicles to provide wide-area visual assessments. With the support from a team of UAV operators and analysts from our partners at HaloDrop, we’re able to take critical imagery gathered by UAVs. Then with software and engineering support from our data platform partner, Palantir Technologies, we’re able to overlay the aerial imagery on top of existing map data, geo-rectify it, create an updated and detailed map of the disaster zone, and begin to quantify the scope of damage and drive resources to the areas of greatest need. Read more on how our team is coordinating with the Humanitarian UAV Network to utilize drones in Nepal here.

With updated maps, imagery, and real-time data, Team Rubicon’s medical teams will be able to identify which areas require immediate care, and most importantly, these maps and data will be shared with other relief agencies, improving the overall response to the people of Nepal.

Additionally, the recon team includes a Nepalese American physician and native speaker to assist with medical coordination and follow-on planning. Currently, 31 members are on the ground in Kathmandu, pushing teams to the outlying villages of Kalinchowk and Dhumthang to provide aid. Another 10 volunteers will be en route within the next 24 hours. Keep tabs on Operation: Tenzing by following Team Rubicon on Twitter.