A local veterans group is taking some pretty unorthodox steps in Minneapolis, Minnesota, to remind lawmakers about the high rate... 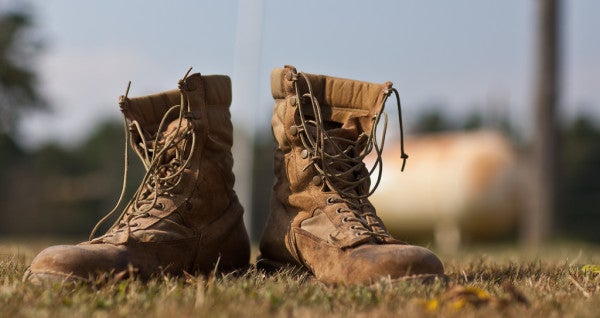 A local veterans group is taking some pretty unorthodox steps in Minneapolis, Minnesota, to remind lawmakers about the high rate of suicide among active-duty service members and veterans across the country.

Operation 23 To Zero is placing 23 pairs of combat boots on the steps of the state capitol building to encourage lawmakers to improve the availability of mental health resources to veterans and to inspire veterans and military members to seek the help they need.

Led by Marine Corps veteran David Peters, the group kicked off this demonstration on Monday, April 6. The 23 pairs of boots are meant to symbolize the 22 veterans and one active-duty military member who commit suicide every day.

According to its Facebook page, Operation 23 To Zero — which normally sponsors and supports events throughout Iowa, Minnesota, and Wisconsin — plans to keep adding boots to the steps of Minneapolis’ capitol building all week and is accepting donations from locals. A Facebook update posted on Tuesday said the group had already doubled the amount of boots on the stairs.

Some of the boots on the steps belong to veterans for whom it is too late to receive help, such as those of Sgt. Benjamin Jon Miller who took his own life in 2008.

“There will be a lot more boots,” Desert Storm veteran Bob Leslie told CBS Minnesota reporter Esme Murphy in an interview. “We’ve got to stop it. Somehow we’ve got to reach out and stop it.”

CORRECTION: David Peters was deployed with the Marine Corps under Operation Enduring Freedom, once to Africa and once to Afghanistan. An earlier version incorrectly stated that he was an Iraq and Afghan war veteran. (1/7/2015; 8:20 pm)