The officer of the day picks up the phone and it’s one of those calls you just hate when you’ve... 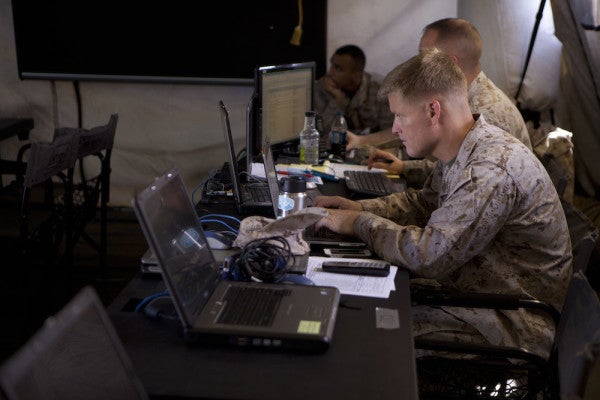 The officer of the day picks up the phone and it’s one of those calls you just hate when you’ve got “the duty.”

A brother Marine is calling in like a ghost of a long-gone, but not forgotten, battle. Something he saw in the media triggered something that the duty officer recognizes as a manifestation of the post-traumatic stress disorder that stalks too many combat survivors.

This caller, obviously distressed and anxious, wants to talk to the battalion commander, only the one he wants to shout at has not been the battalion’s commanding officer in more than a decade. Not since the Second Battle of Fallujah.

It could have gone sideways, easily, but it did not. The duty officer cared and made a sensible call. The veteran who got the call from the duty officer recognized the name of the distressed individual and put out an alert through an emergency contact network. This prompted someone who got in a car and drove to find his buddy, who, hours later, still in crisis. The Marine brother drove from south Texas to Louisiana and spent hours with the distressed veteran. By the time he calmed down, there was even discussion that he might give the VA another try.

This result is what clinical professionals cite in the “Handbook of Military Social Work” as a good outcome. It demonstrates the benefit of what used to be called the “grapevine,” or, “the old boy line.” And because of social media — in this case, the tool was Facebook — dozens of the distressed veteran’s buddies from the days of fury were quickly alerted, and the closest comrade in arms hit the road to help a brother down.

The Marines in this intervention devised a Facebook group, unique to their own unit: 1st Battalion, 3rd Marine Regiment. It evolves as an expanding emergency contact network that they are devising together. It is a work in progress. Its purpose is simple: When someone from the unit is going through a rough time and needs some support, he can post a message on the private Facebook page. Or when someone in the unit receives a call, message, or signal of distress from a buddy, he can post a message on the group and then unit members can immediately work together to determine who is nearby and able to go check on the Marine who needs help.

“There have been three incidents where the network has been spun up,” Jake Ancipink, a Marine scout sniper veteran, says in an interview from his home in New Mexico where he is studying engineering. “One for sure that was a life and death thing. Take it for what you will, my assessment was definite that he needed immediate contact.”

And that is exactly what happened. With the unit members alerted, someone the veteran knew and trusted, and felt safe with, went directly to his house to help him out.

The emergency contact network concept, Ancipink says, is effective because it is specific to the unit the veteran served in. Members who volunteer for the network make an honorable commitment to be available if one of their warriors is hitting the wall.

Ancipink explains that as an engineering student, “I look at a problem, and I look for a way to fix the problem.”

Sounds like the better end of the military, doesn’t it?

“We think this is a model that could be replicated nationally,” says Garrett Anderson, a member of Alpha Company 1/3 Marines that fought in Fallujah with the distressed Marine who made the call to the officer of the day.

Anderson is the filmmaker, who with his partner, Antonio De La Torre, made the documentary, “The November War,” about one squad’s worst day in that calamitous fight.

He is also my son, a Marine veteran who has faced his own issues with PTSD, and has also been both helped and deeply frustrated by the Department of Veterans Affairs’ services. Anderson was an infantry grunt and platoon radio operator during the house-to-house fighting in Fallujah.

The veteran who was in crisis, Anderson says, “told me that ‘The VA doesn’t get me,’ and that, in my experience, happens a lot.”

The idea of an organic unit emergency network is not intended to cut out the VA’s crisis hotline, it is meant to supplement it. Ultimately, the network can help a veteran in crisis connect first to someone he or she trusts, and then get to the VA to receive the help needed, Ancipink says.

The private emergency contact network page, Ancipink says, “Is not for chat. It is just what it is supposed to, a network. We in no way want to substitute for VA psychological counseling. We want to be there, and go there, so that the veteran can be with someone he (or she) trusts, and feels safe with, and then, get them to counseling.”

Anderson thinks these networks localized at the unit level can be replicated on a nationwide scale at little to no cost to anyone. “That is why we would like to get the word out,” he explains.

Because of the ease with which anyone can access social media, battle buddies across different states and time zones are now only a click away.