What I Saw In The Invictus Games Lives In Our Veterans

In 2014, Elizabeth Marks, a former U.S. Army sergeant, was traveling to the United Kingdom to compete in swimming events... 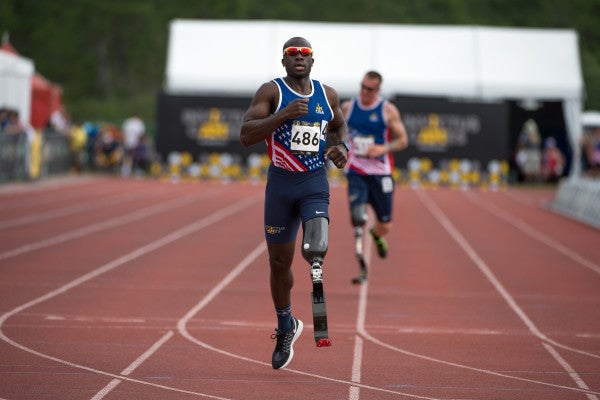 In 2014, Elizabeth Marks, a former U.S. Army sergeant, was traveling to the United Kingdom to compete in swimming events at the inaugural Invictus Games when she went into respiratory distress and nearly died. She was airlifted to a hospital in England, where medical staff saved her life. This year, Marks was able to compete in the 2016 Invictus Games in Orlando, Florida, and when Prince Harry, who founded the games, hung yet another gold medal around her neck, she promptly returned it to him, asking him to give it to the hospital staff members who saved her life two years ago.

Marks is a perfect example of what the Invictus Games stand for. In Latin, the word “invictus” means “unconquered.” The games are a week-long event where more than 500 wounded military warriors from 15 nations compete in 10 different events. The competitors are service men and women who put their lives on the line and suffered life-changing injuries. By competing together, they demonstrate the unique camaraderie of all military members and the unconquerable nature of the collective human spirit. They have overcome pain and injury, have been tested and challenged, and have triumphed.

It was an honor to serve as a Champion for this year’s Invictus Games. It was also incredibly moving to meet these elite athletes and their families and to see some of the highest-ranking leaders from the Pentagon including U.S. Army Chief of Staff Gen. Mark Milley, U.S. Army Undersecretary Patrick Murphy, and U.S. Air Force Secretary Debbie James come out to support them, along with First Lady Michelle Obama, President George W. Bush, and Prince Harry.

Each event was a reminder that these brave men and women, both active duty and veteran, represent the greatest part of us all — the part that will not be defeated. We know that the vast majority of our veterans are strengthened by their military service, bringing home with them the values instilled by that service: honor, duty, leadership, respect, integrity, determination. Some sustain physical injuries that are visible. But for others, their injuries are often difficult to see: post-traumatic stress, traumatic brain injury, military sexual trauma, and even the difficulty of returning to civilian life after duty. Such invisible wounds can take a profound toll.

The resiliency on display at the Invictus Games is not unique among veterans. At Justice For Vets, we believe that every veteran deserves the opportunity for treatment and restoration, which is why we advocate for the expansion of veterans treatment courts, an alternative to incarceration for veterans who have come into contact with the justice system because of substance use disorders, mental health issues, and/or trauma. When veterans treatment courts connect these men and women to the benefits and treatment they have earned, they thrive and emerge from the program unbowed, unafraid, committed to continuing to serve their country, their community, their families, and their friends. Like the athletes of the Invictus Games, they have an unconquerable soul, adapting and persisting through incredibly challenging circumstances, triumphant against the odds.

Army Veteran Stefan LeRoy competes in a bicycle race during the 2016 Invictus Games in Orlando, Florida, May 9, 2016.DoD News photo by EJ Hersom

I can think of no better way for me to thank our active duty and veteran military members for their extraordinary service and sacrifice than by supporting programs, organizations, and other activities like the Invictus Games that support and encourage them and their families. I encourage you to learn more about our veterans and the sacrifice they and their families make for this country. Support your local veterans service organizations, and advocate for the programs that work for them.

Together, we can overcome both visible and invisible wounds, and watch our warriors triumph once again, becoming the masters of their fate and the captains of their souls.