'They Called Us Lucky' is at its best when it focuses on the events in Iraq and their immediate consequences for the lives of those involved. 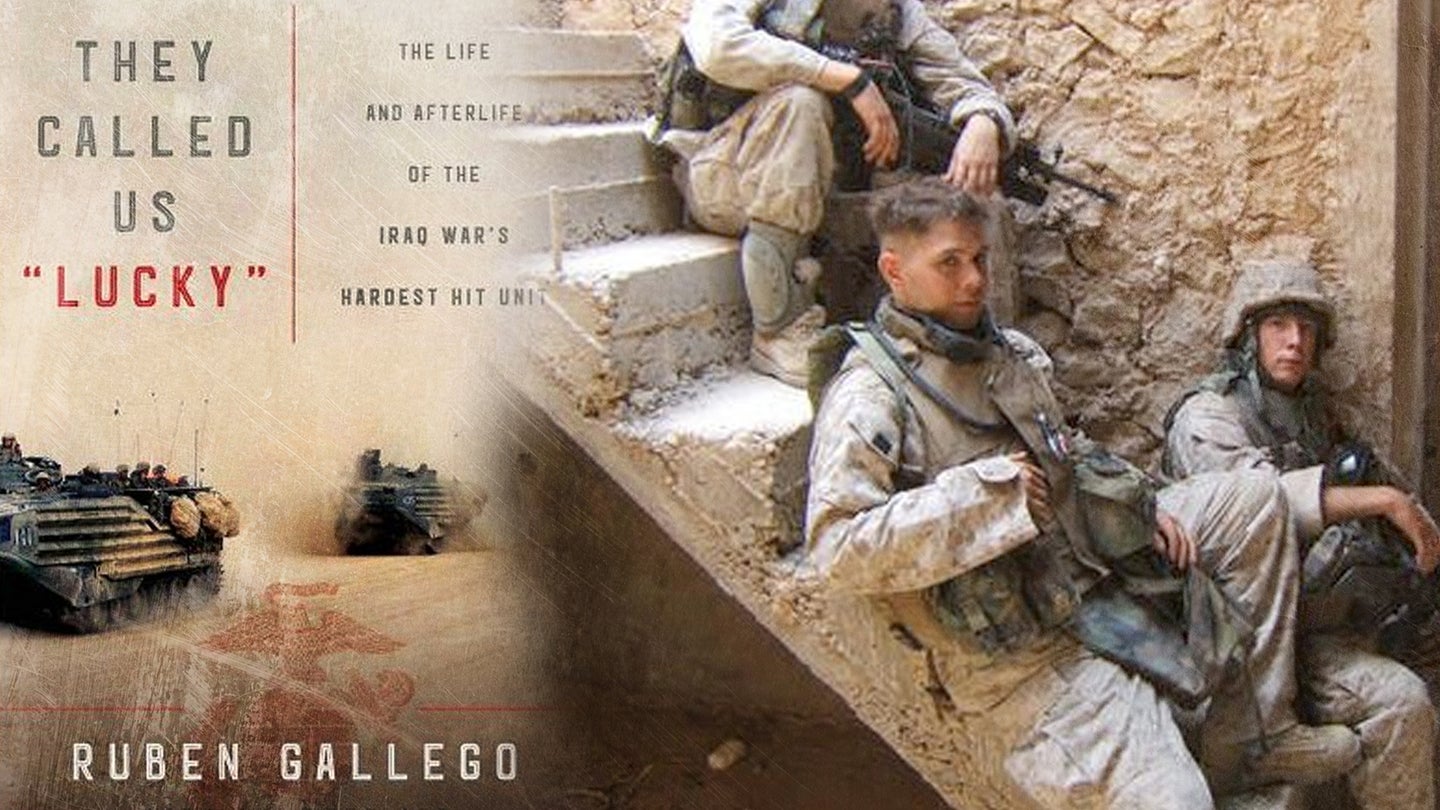 Operation Matador was, by all accounts, a hellish experience for the military service members involved; a harrowing microcosm of the state of the early Global War on Terror that still rages on to this day. In and around that engagement, a company of infantry Marines took the heaviest losses of any unit in the Iraq theater of operations, withstanding nearly fifty combat deaths in just a few months of intense fighting.

One of the key aspects of the decimated company was that they were reservists – part-time Marines tasked with spearheading an assault into enemy-held territory, toeing the line with their active-duty brothers and sisters. Among them was then-Lance corporal, now-U.S. Congressman Ruben Gallego from Arizona’s seventh district, the main character and author of “They Called Us Lucky,” which was co-written with “American Sniper” ghostwriter Jim DeFelice and published on Nov. 9, 2021. Had the Marine-turned-politician focused only on the events in Iraq and their immediate consequences for the lives of those involved, the book would have been a good contender for the Commandant’s Reading List. But it is crippled by slogging political ruminations, self-aggrandizement, and a lack of focus.

On the surface, the thesis of Gallego’s work is relevant, engaging, and especially pertinent to reserve and National Guard troops, sometimes referred to as “weekend warriors.” Gallego has been a longtime defender of the capabilities of Marine Corps Reservists, claiming that they are every bit as capable as their active-duty counterparts. The book provides a relatable vignette of the author’s early life as a typical enlisted Marine who, nonetheless, was an outlier in many respects: A Hispanic boy from a poor background, who went on to graduate from Harvard. On one of his summer breaks from school, he chose to enlist in the Marine Reserves as a mortarman while he waited to be readmitted to university after an academic suspension. Shortly after completing his initial training and returning to school, the Sept. 11 attacks fundamentally altered his world, making the prospect of deploying to a combat zone not only possible, but almost a foregone conclusion.

It would not be until early in 2005 that he would find himself deployed to a combat zone, where he was attached to Lima Company, 3rd Battalion 25th Marine Regiment, 4th Marine Division during the third wave of Operation Iraqi Freedom, or OIF 3. At first, the deployment was relatively peaceful. Gallego was able to befriend many locals. And though he was aware of other units in the area making contact with the enemy on a regular basis, his initial experience in Iraq was comparatively mild. The absence of enemy contact was not to last, however, as in a matter of weeks, 47 Marines would be dead, and Lima Company would experience some of the bloodiest combat of the entire war.

Gallego’s pain and stress come to life in the pages of this book, capturing the exhausting terror that morphed into fatigue and resignation as Marines realized that they were living on borrowed time. The moments of wry humor that would seem absurd to anyone who’s never been in the military are also captured perfectly, such as an anecdote about going out on patrol, engaging the enemy in direct combat, then returning to base only to get their butts kicked in Halo on Xbox Live by a bunch of middle schoolers. There’s also a classic story about a senior Marine attempting to reprimand Gallego in the middle of a mortar attack for not blousing his trousers over his boots. And my personal favorite quote as he describes entering a suspected hostile structure: “Kicking doors in or using Thor (a hammer) was always a last resort…I learned that the hard way. On one mission I was first up…I stepped back and kicked. And kicked. I went on kicking until my foot was sore. Smith came up…reached for the handle and let us in. He gave me the après vous motion as if he were the maître d’ at a fancy restaurant. ‘Dick move Smith. Dick move.’” Unfortunately, this poignant representation of Marine Corps life greatly contrasts with the turn that the book takes in the eighth section.

Ruben Gallego became an activist and politician after his time in the Marine Reserves, campaigning for and winning elections to successively higher offices. It must be acknowledged that Gallego’s account of his post-military career is him speaking his truth, and his transition from fighting Marine to U.S. congressman is part of his journey, worthy of respect. Nonetheless, switching from eulogizing dead Marines and detailing hellish combat missions to regaling the reader with stories of political achievement, comes across as both self-aggrandizing and narcissistic, especially in a book that is supposedly all about what happened to Lima Company. From the 8th section onward, the book reads like a campaign speech on how he “started from the bottom” and overcame seemingly insurmountable challenges to become a U.S. congressman. Gallego jumps between actual combat and passages comparing his political career to combat, including asides about his political beliefs. The scenes in Iraq are striking and highly engaging, but when he changes gears to describe his career in politics, such a shift violates the established narrative flow. It feels like the political stuff would be better off in a different book, one which belongs to a fledgling new literary subgenre; the “Veteran Success Story.”

This isn’t to say that veteran success stories don’t have a place in popular culture. However, for Gallego, highlighting his successes means a series of cringe-worthy “as a veteran” quotes like “I attacked it like a military operation. I set objectives, knocked them off one by one,” which sounds hackneyed and cliched. Gallego also makes sure to remind us how much more “open minded” he is than most Marines, which some readers might find irksome. Adding to this, there’s a shoehorned non-sequitur in the afterword of the book about his experience at the January 6th Capitol Riots getting whisked away by security, but it’s written in the same breathless detail as his many combat recollections. This addendum seemed superfluous, which is a word that could be used to describe the majority of Gallego’s account of his post-service civilian career. Overall, latter parts of the book are little more than a self-promoting stump speech put to prose.

In fairness to Gallego, however, his entire life as told by him has been an exercise in defying the odds, and so it would make sense that he would be proud of making the leap from door-kicking Marine to glad-handing congressman. In addition, his story of grappling with mental health, alcoholism, and an ill-fated marriage serves as an interesting bookend to his losing fellow Marines in combat.

One of the key points of failure for the book is a lack of focus. Had it centered on Gallego’s time in the Marine Corps, and especially his time with Lima Company, it would have made for an excellent professional military read. Had “They Called Us Lucky” instead been an account of Gallego’s rise from poverty, through Harvard, then the Marines, and finally into office, and not specifically about the tragic fate which befell his unit, it could have worked as an inspirational story. Instead, the work as it stands reads like a bait and switch, and Gallego’s personal story isn’t engaging enough to carry the narrative after the emotional and strenuous account of Lima 3/25 in Iraq. The first seven sections are still worth reading as a record of the past, a throwback to the state of the early Global War on Terror, and as an example of what activation in a time of crisis looks like for reserve or National Guard troops. The 8th section onward has nothing to do with the Marines of Lima Company, and the book suffers irreparably from their absence.