As memorable as that scene is, the real-life story is somehow better. 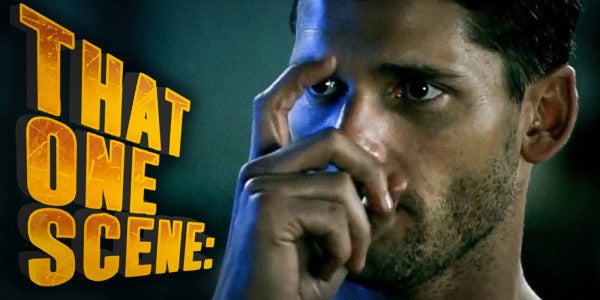 Welcome to That One Scene, a semi-regular series in which Task & Purpose’s senior reporter, James Clark, waxes nostalgic about that one scene from a beloved military movie.

Humor isn’t usually the word that comes to mind when someone brings up Black Hawk Down, and for good reason. Ridley Scott’s 2002 military drama flawlessly combines top-notch cinematography with unforgiving action, superb acting by its all-star cast, and an impeccable score to produce a stirring dramatization of the Oct. 3, 1993 Battle of Mogadishu in Somalia.

At its heart, Black Hawk Down is a story of sacrifice, desperation, and violence.

But there’s one moment that’s sure to elicit laughter for how it pays homage to the time-honored military tradition of belligerence; the sole defense of the rank and file against the hardasses who make their lives hell from 0500 to lights out.

We are of course talking about this scene:

After returning from a reconnaissance mission on a high-value target, ‘Hoot’, a Delta Force soldier played by Eric Bana, is approached by Capt. Steele (Jason Isaacs), a hard-ass commander who immediately grills the operator for shirking the base’s weapon safety condition rules, by having his rifle on “fire” with a magazine inserted.

Hoot’s reply — holding up his trigger finger and saying “this is my safety, sir” — is a salty slap in the face, and is one of the most recognizable moments from the movie. (A cursory search for “this is my safety” brings up a trove of memes, gifs, patches, decals, and even a few t-shirt designs.)

For all those who’ve dreamt of tactfully telling a stuck-up officer to “f*** off,” the brief scene is a hail mary plucked from the E-4 mafia playbook — it comes with a high probability of failure, and maybe latrine duty or an Article 15, but if successful, you’ll become a patron saint of the junior enlisted.

Yet, as memorable as that scene is, the real-life story is somehow better.

“In entertainment, they combine a couple of events,” Norm Hooten, the real-life basis for ‘Hoot’ in Black Hawk Down told Task & Purpose.

In the case of that one scene, it combined three: A close-quarters battle training session; Hooten’s encounter with the Ranger captain; and a reenactment done by the soldiers in the evening — which was also portrayed in Black Hawk Down.

A former Delta Force soldier who retired as a master sergeant in 2001, Hooten served with Task Force Ranger in Somalia as part of Operation Gothic Serpent, the official name for the mission that led to the Battle of Mogadishu.

“I had provided marksmanship and tactics training for some of the Rangers that were assigned to us over on Task Force Ranger,” Hooten said. “Back then they didn’t get a lot of what we call close-quarters battle training, so we were helping them work through some of their close quarter battle drills, which is basically room to room combat in teams.”

Related: The true story behind that one scene from ‘Black Hawk Down’ that explains why soldiers go to war

“So, one of the things I said to them in training was ‘look, it’s real important you keep your weapon on safe, but it’s also important that you keep your finger off the trigger because the trigger finger is the only safety that’s connected to your brain,” Hooten explained.

“That scene in the cafeteria, Capt. Steele did walk up and said ‘hey, put your weapon on safe,’ but we had a different [procedure]” Hooten said.

In most cases, troops behind the wire in a combat zone are directed to maintain a Condition 3 weapon, which for an M4 or M16 means having a magazine inserted, safety on, no round in the chamber, bolt forward, and the ejection port cover closed.

However, for the Delta Force soldiers who were assigned to Task Force Ranger, their safety rules were a bit different, Hooten explained.

“So, we clear our weapons, we drop the hammer, and once you drop the hammer on the weapon, it won’t go on safe. That way I know if I pick a weapon up in the middle of the night, and I try to manipulate the safety on it, if it goes on safe I’m not quite sure whether it’s loaded or not. But if it won’t go on safe, I know that gun’s clear. The only way you can manipulate the safety is if that weapon is cocked.”

Now, that’s a little hard to follow, so let’s break it down, Barney style:

At this point, you’ll be unable to fire a round, or move the selector switch from “fire” back to “safe” until you rack the bolt again.

In that scene, although Hoot had a full magazine inserted into his weapon and it was set to “fire,” he would be unable to discharge his rifle without first racking the bolt. In a sense, it was a different kind of safety mechanism.

But when he tried to explain this to the Ranger captain, “he didn’t understand that,” Hooten said. “I’m not a big fan of that guy, but it was not a big deal. I just said ‘hey, I got it on safe. I’ve got my gun, you’ve got your gun. You worry about yours, I’ll worry about mine.’ That was kind of the way that went down.”

As for how that encounter ended up differently on screen, well, you can thank a gaggle of junior enlisted who were hanging around that day.

“There were a couple of Ranger privates there that saw that exchange, and they had also been to that training that same day,” Hooten said.

“So, that night when they did their skit — they usually do a skit a couple times a week, where they would kind of roast their leadership. They took both of those instances and combined them, and made that scene out of it.”

That skit also made its way into Black Hawk Down, but as Hooten notes “neither of those two events happened in the same place.”

“They used that verbiage ‘hey, this is my safety’ so they are the ones who kinda roasted him on it. It never really happened that way.”

And there you have it, the true story behind that one belligerent scene in Black Hawk Down.

Related: ‘What to remember in a firefight’ and other advice from a legendary Delta Force operator