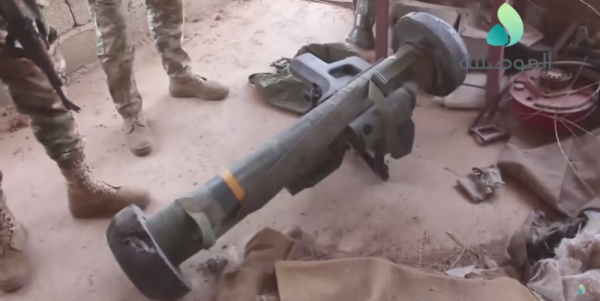 With the heart of ISIS’s self-proclaimed “caliphate” in Mosul in ruins and Secretary of Defense James Mattis in Baghdad to assess the U.S.-led campaign against the terror group, Iraqi security forces are working overtime to expunge more than 2,000 militants from the strategically crucial city of Tal Afar. The offensive could signal “the end of ISIS’s military presence” in the country’s northern region, according to a spokesman for the U.S. coalition, but the ISF and their Western military partners have run into a familiar obstacle: American-made anti-tank weapons.

Raw footage posted to YouTube by Iraqi television station Al-Mawsleya appears to show an FGM-148 Javelin anti-tank missile and launcher among a cache of weapons recovered just outside Tal Afar. The Javelin has a range of up to 2.7 miles with an 18-pound tandem warhead (two shaped charges, one to pierce reactive armor the other to wreak havoc) and designed to penetrate even the toughest armor — including the skin of the Pentagon’s beloved M1 Abrams tank.

The discovery of the Javelin is disturbing. Despite ISIS’s reliance on unconventional weaponry like their beloved vehicle-borne IEDs, this isn’t the first time militants have wielded heavier American-made weapons against the very troops meant to carry them. An ISIS propaganda video released in June 2015, after the capture of the Syrian city of Palmyra, revealed militants targeting Syrian government forces with U.S.-made BGM-71 TOW anti-tank missiles. One year later, the same missiles, allegedly fired by U.S.-backed Syrian rebels, were used to down a Russian Mi-25 assault helicopter.

It’s likely ISIS fighters came upon the Javelin in the same way it acquires most of its other conventional weapons: by looting Syrian and Iraqi military weapons caches. A 2003 Government Accountability Office report published after the invasion of Iraq found that at least 36 Javelin missile command launch-units had gone missing in the country as a result of lax chain-of-custody standards at U.S. weapons depots. If more are in enemy hands, those launchers would be added to the tons of armored vehicles, Humvees, artillery, surface-to-air missiles, and Turkish variants of the U.S.-made M72 LAW anti-tank weapons and Russian RPGs that are confirmed to be in ISIS’s arsenal. Most of those arms were simply abandoned by the Iraqi Army and left for militants to pick up.

But the anti-tank weapons like the Javelin and TOW didn’t just turn up in Iraq and Syria amid the chaos of the 2003 invasion: they were sent there more recently by the U.S.-led coalition in Syria. Under Timber Sycamore, the covert CIA program established during the Obama administration to arm Syrian rebels locked in a protracted civil war against the Bashar al-Assad regime, at least 500 TOW missiles were reportedly transferred through Saudi Arabia to the Free Syrian Army in late 2015. And in February 2016 Washington Post reporter and Marine veteran Thomas Gibbons-Neff identified a Javelin in the hands of Kurdish YPG forces at work in northern Syria. (The Pentagon and State Department bothdenied sending any anti-tank weapons to regional forces fighting ISIS in Syria.)

In July, President Donald Trump moved to end Timber Sycamore, telling the Wall Street Journal, ”It turns out it’s — a lot of al-Qaeda we’re giving these weapons to.” He’s not totally wrong: the complex mosaic of rebel forces operating in a theater defined by complicated and shifting allegiances makes weapons transfers an even riskier proposition than arming the Afghan security forces in Kabul. Indeed, the Pentagon announced on July 27 that it would for the first time end of military support for a Syrian rebel group for pursuing objectives outside of OIR’s strict anti-ISIS mandate, namely going AWOL from the At Tanf garrison that saw escalating clashes and tensions between OIR and pro-regime forces this summer.

But despite all that, the Trump administration has continued to pursue weapons transfers to the Syrian Democratic Forces, as if the new program is without the problems that made Timber Sycamore a goldmine for American “allies” in Syria. As we’ve noted before, the Pentagon is shit at monitoring weapons transfers: A 2016 analysis revealed that DoD could barely account for half of the 1.5 million weapons provided to Afghan and Iraqi security forces since the start of the invasions there, while, while a previous 2014 report found 43% of the weapons the ANSF received simply vanished. All of these weapons flow freelybetween ISIS forces across the Middle East.

Perhaps the appearance of the Javelin in an ISIS cache will induce the administration to reconsider its arms transfers to the SDF. If a Taliban fighter can wave around a fully accessorized SOCOM 7.62mm assault rifle, what makes the DoD think he can’t get his hand on a U.S. anti-tank missile? In July, Gibbons-Neff received a flaccid answer to that question from OIR spokesman Col. Ryan S. Dillon: “Whenever we sign up for something, you know, we go through every serial number.” Fat fucking chance.