The Army Is Learning To Love The Stinger Missile — Again

The FIM-92 Stinger missile was the man-portable air defense system of choice for the U.S. Army and Marine Corps (and... 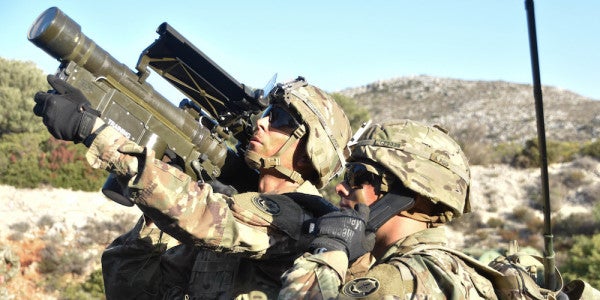 The FIM-92 Stinger missile was the man-portable air defense system of choice for the U.S. Army and Marine Corps (and a handful of actionheroes during the 1980s and 90s, plus some Afghan, uh, “freedom fighters”). Since the end of the Cold War, the Department of Defense has drifted away from the infrared homing missile; the Global War on Terror’s emphasis on counterinsurgency tactics led to a decline in funding for short-range air defense systems (SHORAD). But with the Pentagon adopting an increasingly rigid posture in eastern Europe, the Army is learning to love the Stinger once again.

On Jan. 11, the service announced that, for the first time in nearly 15 years, it would add training and coaching of two-man Stinger missile-system teams into the 7th Army Training Command's Joint Multinational Readiness Center future training exercises. The previous day, 50 Observer Coach/Trainers from the Fires Center of Excellence in Fort Sill, Oklahoma, arrived at the Army Garrison Hohenfels Training Area in Germany for their own crash course on the Stinger. The goal, according to Air Defense Integrated Office training and doctrine director Lt. Col. Aaron Felter, is to rapidly incorporate 62 Stinger teams into U.S. Army Europe’s operational force.

The return of the Stinger is exciting for all kinds of missiley reasons. First adopted in 1981 as a replacement for the FIM-43 Redeye, the surface-to-air variant of the heat-seeking missile was deemed effective against helicopters, unmanned aerial vehicles, and fixed-wing transportation and reconnaissance aircraft — “a true ‘fire and forget’ missile no inputs from the gunner once the weapon is fired,” per the Marine Corps manual. While just over 16,000 were produced, the man-portable launcher proved versatile enough to see action from the point air defense system of Iowa class battleships in the 1980s to the shoulders of Marines on the shooting range today. (The Russians’ 9K38 Igla Stinger variant is considered among the most powerful man-portable SAM systems in the Ministry of Defense’s arsenal.)

No wonder the Stinger was an occasional fixture of the technicolor action flicks of the 1990s; it’s the same system that helped the Afghans drive out the Russians — and it packs a wallop. “Based on the Chief of Staff of the Army's initiative, getting Europe stood up with short-range air defense (SHORAD) Stinger teams is his first priority inside the initiative of getting Stinger teams back online,” Felter said in a Jan. 11 statement. “We're going to go to the National Training Center and the Joint Readiness Training Center, however, the immediate focus is Europe and getting Europe ready to fight tonight and defend Europe against any adversary.”

Make no mistake: “Against any adversary” is a clear euphemism for Russia, increasingly aggressive in eastern Europe since the 2014 annexation of Crimea from neighboring Ukraine, and the Stinger training comes amid a steady buildup of forces under U.S. Army Europe as part of Operation Atlantic Resolve. The deployment of the 3rd Armored Brigade Combat Team, 4th Infantry Division to Germany in January 2017 for USAREUR’s largest training exercise since the Cold War marked the first prolonged rotation of an armored combat brigade in years; U.S. combat troops who spent much of the previous decade in Iraq and Afghanistan are now deploying to Europe with tactics and equipment meant for a Soviet-era land conflict.

While the Stinger proved a poor match for the campaigns in Afghanistan and Iraq where the U.S. has enjoyed overwhelming significant air superiority, the specter of a confrontation between Russian and NATO-aligned forces in eastern Europe is enough of an incentive for the Army to re-up its training. The 2nd Cavalry Regiment — one of the first units to deploy to European NATO allies like Germany and Poland in response to the Crimean annexation — is set to receive a batch of upgunned Stryker Infantry Carrier Vehicle Dragoons, 80 of them outfitted with 30mm cannons effective against drones and small aircraft. These are the SHORAD battalions that will house the Army’s new Stinger teams: The service noted that personnel from the 2nd Cavalry had already joined the 173rd Airborne for a five-week Stinger crash-course Grafenwoehr. (In the meantime, the State Department announced the sale to Poland of the Patriot Anti-Missile System on Nov. 17 and M142 High Mobility Artillery Rocket System on Nov. 28 to help restore NATO allies’ sense of security while defense contractors whip up their own SHORAD-enabledcombat vehicles.)

“War is expensive in both treasure and lives,” USAREUR operations chief Brig. Gen. Timothy Daugherty, who also deployed to Europe to face down the Soviets during the 1980s and ’90s, told Army Times in a March 2017 interview. “Preparing for war is a lot cheaper than executing one.”

When these fancy anti-air toys will actually make their way downrange to antsy soldiers remains to be seen, but one thing is clear: As Russia and NATO aircraft eye the skies above Europe amid escalating tensions, those new Stinger teams can’t get here soon enough. In the meantime, here’s a handful of videos of U.S. service members training on these bad boys: