Waterproof and rugged enough to stand up to a three-year-old, the Nocs binoculars even work with my wonky broken nose. 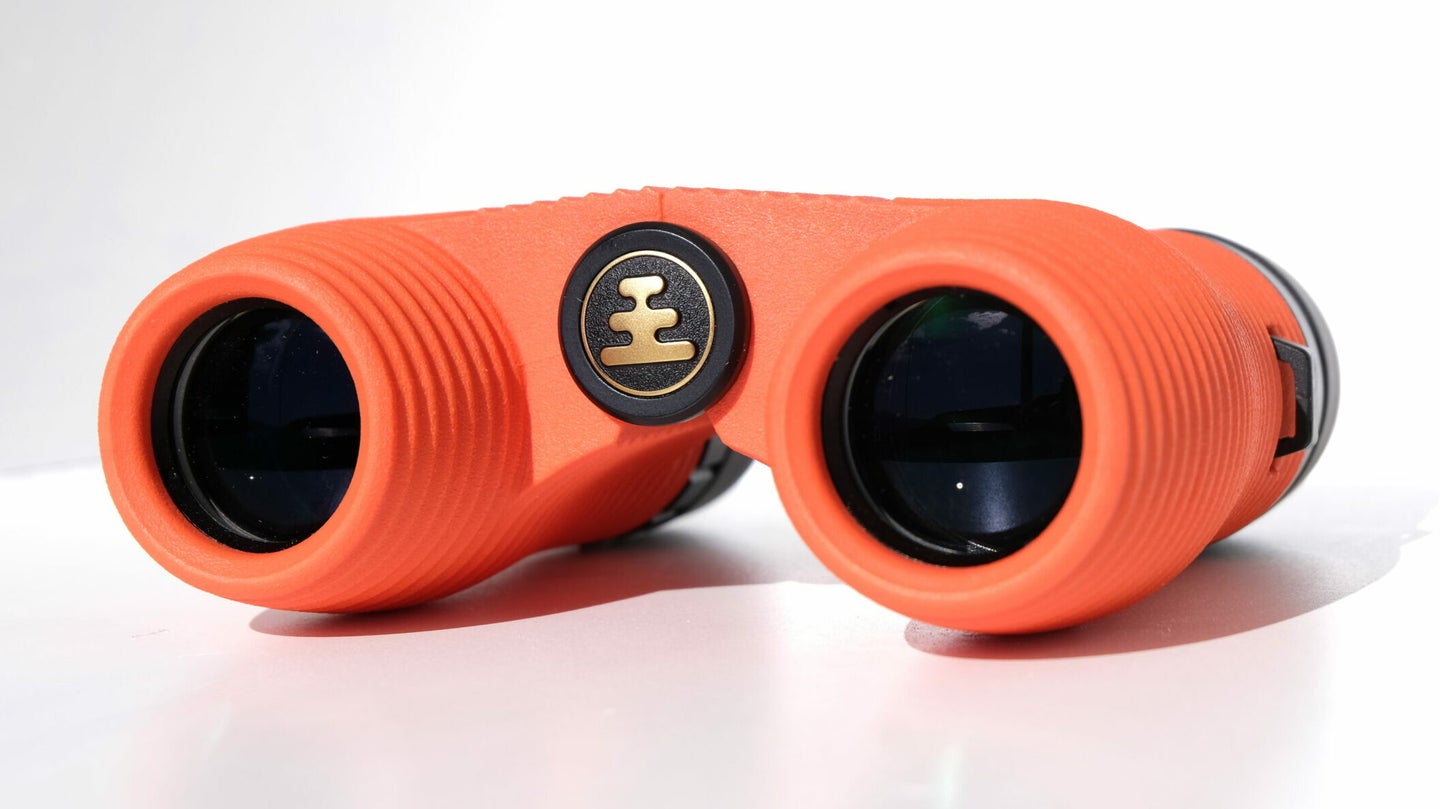 My face has a fundamental flaw. It’s shaped, well — screwy. While my wife is still fond of it, what broken nose disfigurement does is prohibit me from using binoculars to their fullest. One eye? Sure, it works fine. Introduce both to the party and I’m left cross-eyed and looking downrange at a very blurry, weird-ass-looking deer, turkey, or golden eagle.

I’d given up as, no matter the descriptor — big or small, expensive or cheap — every binocular I tried was the same. Enter Nocs Provisions Standard Issue 8×25 Waterproof Binoculars, affectionately and thankfully shortened to just Nocs. According to the company, these are “binoculars reinvented,” and this rugged set of optics aren’t too big, aren’t too small, and had, from my perusing of the company’s site, a trick set of eye rests that might actually work with my wonky bridge.

I was intrigued and a short time later, and after chatting with Nocs’ people, a poppy orange set of Nocs showed up at my mountain retreat ready and willing to bring the outside world into focus. Would they work? Would they stand up to my exacting demands? Would they even work at all?

Oh yeah, they work. Let’s dig into them.

Based on the packaging, graphics, and design of the box the Nocs came in, the company is clearly going after folks who follow outdoorsy Instagram influencers. It’s the sort of cutesy graphics that’d make you think, “Are these for children or hipsters?” Yes, I’m showing my age by using the term “hipster,” but I stand by it.

What is useful in the box are instructions on how to use your phone’s camera and the Nocs in conjunction with one another. The instructions are very IKEA-esque in that they’re pictograms, with no text. Accordingly, all you need to do is lift the Nocs up and then just line up your phone’s camera. That’s it, pretty simple, right? I’ll get to the actual functionality in a second.

Additionally, the box has the company’s Instagram handle and hashtag, which I definitely used once or twice. Maybe I’m a hipster? Inside that box, however, was the brilliantly bright orange (Poppy) Standard Issue 8×25 waterproof binoculars — FWIW, I’m partially colorblind and bright, practically neon colors are awesome because I can properly see them. Nocs offers seven other colors, too.

The box is also completely recyclable, no plastic to gum out the oceans. Nice.

How we tested the Nocs Provisions Standard Issue 8×25 Binoculars

I live atop a mountain inside a national forest, that’s partially stunting on everyone else and a setup for how we live in a fairly rugged locale designed to torture test gear.

Our acre compound is mostly covered in walnut-sized rocks, some harsh bark, big boulders, leftover wood from the previous owner, and the sort of silty dirt that gets in everywhere. I also have three children (three, two, and one) who are super inquisitive and want to do, and use, everything that my wife and I do. My life is a QA’s nightmare, the edge-case scenario they hope never befalls their product.

Before my children’s grubby little hands got ahold of the Nocs, however, I went outside, sat down on our picnic bench, and just tried them out. And holy crap, the first thing I noticed was that I could actually see through them. Crystal clear, 20/20 vision. Of course, I adjusted the pivot point to properly fit my screwy face, but I could see for miles. Miles upon miles of glass-like clarity, it felt as if I was looking through a Maven scope but with both eyes.

Is that a golden eagle soaring a mile above me? Beautiful. A little prairie dog burrowing underneath our house 50 yards from where I was sitting? Hey, get out of there! A herd of deer grazing in the valley below our home, munching on leaves, and potentially being stalked by the mountain lion that lives in the same valley? Oh yeah, clear as my hand in front of me. Nocs says they provide a 357-foot field of view at 1,000 yards with crystal-clear clarity and I can attest to that.

Once I was done observing my kingdom, I tossed the Nocs to my three-year-old daughter who’d been pestering me to use them. Aside from looking through them backward, she almost immediately dropped them into the gravel and dirt. A “sorry, sorry!” later, a quick dust off, they were back in her hands and she was using them properly. They’ve since fallen quite a few more times both from her and her two-year-old brother, and from varying heights. The Nocs continue to endure.

I also brought them with me on a hike alongside a river, as Nocs says they’re waterproof in three feet of water for up to 30 minutes. Though neither I nor my family fell into the river, I did a quick dunk just to test Nocs’ “medical-grade O-ring” and nitrogen-filled optics to see if they’d fog or become filled with water. Nothing.

We’ve used the Nocs almost every single day since they came into our home — we’re still getting used to living in a national forest and the breadth of wildlife is stunning. And they’ve been dropped, banged, beaten up, and generally put through the wringer that’d make most conservationists, park rangers, and hikers cringe. Yet, nothing’s impeded the Nocs’ performance.

Everything. As I said, I’ve used countless binoculars over the years and I’ve never had a good experience. My face precludes it. Yet, the Nocs are the first that actually work and are beyond every expectation. I’ve already recommended them to a host of friends who’ve purchased them and adore them as much as I do.

There’s also a “No-Questions-Asked” lifetime warranty on these binoculars, so if you or your children do manage to break them, Nocs will replace them at no cost. As a lifelong outdoors adventurer, a lifetime warranty is worth its weight in gold with outdoor gear.

I don’t really have a gripe about the Nocs. If I really wanted to nitpick, I’d say the lack of a standard strap. Nocs dropped one of their straps with the binoculars to me, but it’s an extra cost. The ones on the company’s website are $27, which is slightly expensive, but there are others that will work for less. They won’t be as nice, but they’ll get the job done.

At $95, the Nocs Provisions Standard Issue 8×25 Binoculars are a bargain. There are more expensive binoculars that aren’t as rugged, nor as useful, and don’t work as well as these. They may have a kitschy look, especially in the Poppy color here, but there are other colors available that’ll blend in far better than my test unit.

Q. How much do Nocs Provisions Standard Issue 8×25 Binoculars Cost?

Q. How do you dial in your Nocs?

Q. And how do you install the strap?

A. Again, they put together a great installation video here.

Q. Are they light?

A. Yes, in comparison to others of similar spec, but they have a good, solid weight to them.