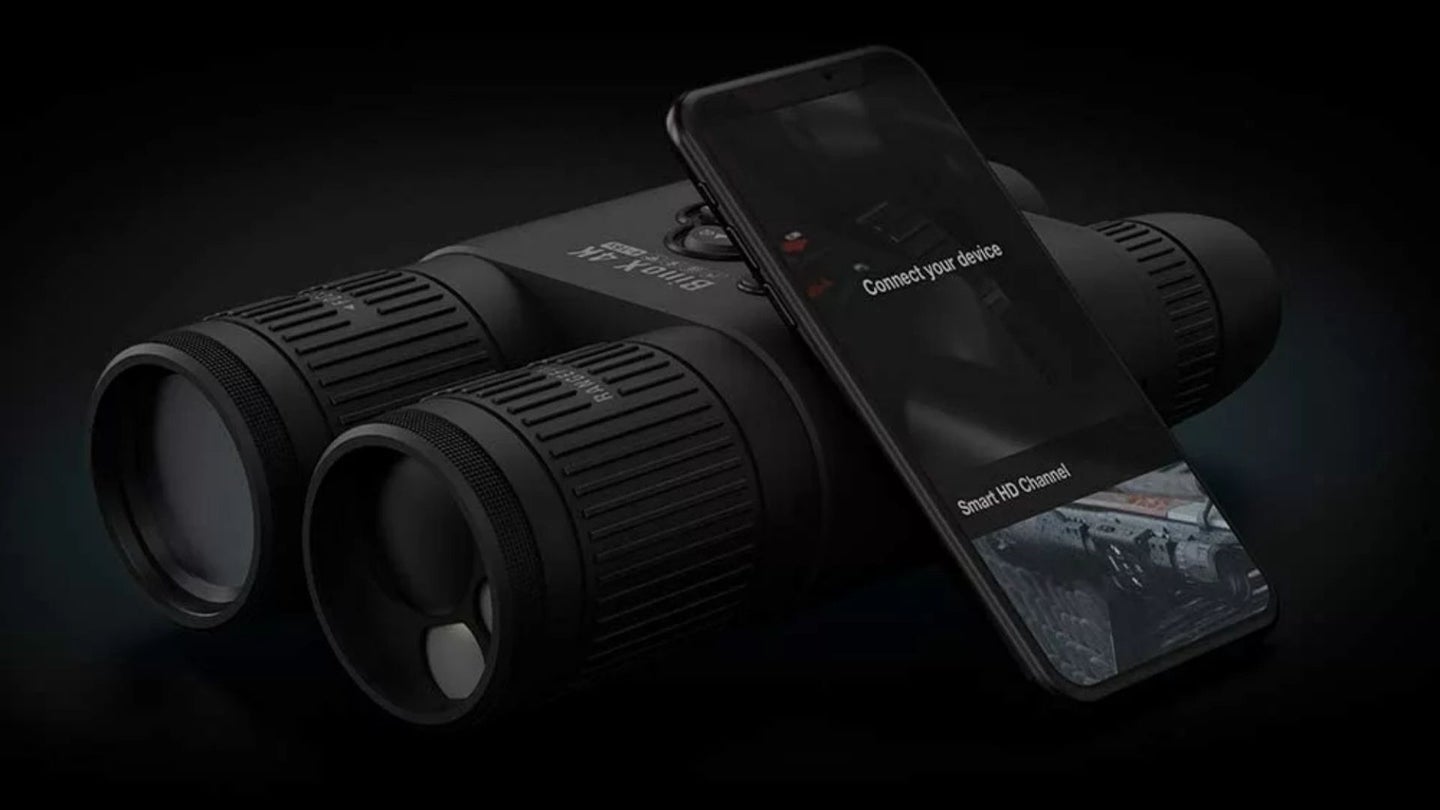 The best binoculars with cameras

Capture what you spy on with these top binoculars with cameras.

Binoculars with cameras are a very niche tool. As the name implies, they combine the functionality of a pair of binoculars with that of a camera. You’d use them just like you would binoculars or a camera, so for bird watching, whale watching, hunting, or spying on your neighbors.

If you understand how binoculars and cameras work, then you’re in a good position to understand how camera binoculars work. You use the binoculars to magnify a faraway image and, if you like what you see, you can take a picture or a short video.

Ranking in as not just the best overall but also the best for hunting and best night vision as well, is the ATN BinoX 4K. Most reviewers rank these camera binoculars as their top pick because functionally, they outperform the rest and they’re made by the highly reputable digital optics maker ATN.

The BinoX 4K is an upgrade to the HD version with two major differences. According to ATN, the 4K sensor has a higher resolution, which results in clearer and sharper imagery. The BinoX 4K’s lithium-ion battery also holds a 15-hour charge.

The BinoX features everything you’d want while living in the smartphone era. It can synchronize with any Apple or Android phone via WiFi, so you can stream images and video along with audio, as well. But it’s also equipped for the digital hunter with weather-resistant construction, night vision, infrared illuminator, and a laser range finder.

While you could use it for bird watching or whale watching, the BinoX’s true purpose is hunting. The idea is you or your partner use it for scouting and then you switch to your riflescope when it’s time to sight in. The genius behind it is that the ATN binos and ATN smart scope can “talk,” meaning they transfer range data. And if you have an analog scope, you can make adjustments according to the binos.

According to reviewers, nighttime images are clear out to several hundred feet, while daytime images are clear out to hundreds of yards. Image quality will degrade the further out you zoom and it gets worse if you or the object moves, but that’s par for the course. One technically savvy reviewer said the only misleading quality is that they’re advertised as 4K, but only record video in 1080p, but that’s because the larger video files will quickly max out the micro SD, which can only go as big as 64G in the BinoX. On the other hand, neophytes have complained about complicated controls.

The ATN BinoX with night vision is priced at $899, but at the time of writing this, you can save about $60 buying it on Amazon. Additionally, if you’re in the market for infrared binoculars with camera, then you can upgrade to the ATN BinoX with thermal imagery for roughly $3,100 more.

Priced under $100, the Bushnell ImageView binocular with camera ranks as the best value. Although the technology is archaic by today’s standards, it comes from one of the most trusted brands in optics.

As you have probably already correctly assumed, the Bushnell ImageView combines the functionality of a binocular and a digital camera. While you use it like a normal pair of binoculars, the camera sits in between the lenses. It’s controlled by two buttons — one works the power and the other operates the camera. It also has a flip-up screen so you can preview videos and images.

If you ask anyone who owns a Bushnell ImageView, they’ll probably describe themself as a casual user. We’re talking about someone who might have an inkling to snap a picture while sitting in the stands at a baseball game or seeing a bird from inside their apartment building. It’s definitely not intended for the pros, and I’ll tell you why.

The Bushnell ImageView only has an 8MB internal memory, it does not have a memory card slot, and it takes 640 x 480-size pictures. That translates into 80 to 300 pictures depending on resolution, or about 40 seconds of video, according to Youtube reviewer and paranormal investigator shabear1000, who bought a pair at a flea market for $5. To retrieve the images, you just link the camera binos to your computer.

The Bushnell ImageView was introduced circa 2004 and it’s since been discontinued, but it’s still widely available new and used. As of this writing, it was available on Amazon for $94 and on eBay for around $20 (used).

Things to consider before buying binoculars with cameras

Since camera binoculars are two things, you should consider how they perform as both. Although it feels kinda obvious and weird to point out, it also feels necessary because it’s kind of a ridiculous combination. Nonetheless, in this section, we’ll tell you the right mix of bino and camera features to include.

If you search for camera binoculars, you’ll find a handful of options that look exactly the same — and it’s quite possible that they are. Several of the models offered by online retailers can be traced back to wholesale suppliers like Alibaba. What that means is a company can buy it in bulk, put their brand label on it, and sell it for a higher price. While several of them are highly rated on e-commerce sites, we’re not entirely comfortable with recommending them in our buyer’s guide.

The controls on most camera binoculars are fairly intuitive. The ones to consider include image display, tripod adapter, and magnification. The first two are self-explanatory, but magnification needs some explanation.

Magnification is probably the most important functional feature to note. Camera binos are equipped with either digital zoom or optical zoom. The latter is often considered superior. With optical zoom — what analog binos use — you get more control and precision.

In digital photography, image quality refers to the file type and image ratio used to save a picture. The image size is measured in pixels. While there are several factors to consider, in general, larger image sizes make better quality images because they capture more detail.

Most camera binoculars use the same kind of memory card as a digital camera. If they don’t, they use internal storage, which is limiting. So, if you’re serious about photography, you’ll want a large memory card and should probably buy a real camera.

Camera binoculars need to hold up against the environment you bring them in, so you should look for ratings by the International Organization for Standardization, or ISO. The most popular for field use are waterproofing, shock-proofing, and dust-proofing.

Construction materials also have a role in durability. Most binoculars with cameras are made out of polymer or metal and will have a protective rubber coating to cushion the glass if you drop it.

Q: Do I need a binocular camera?

A: No. If you’re serious about photography, you’re better off buying a digital camera.

Q: What are digital binoculars?

Q: How do I connect my smartphone or computer to my binoculars?

A: There are several ways, but it depends on the functionality of your camera binoculars. They can connect to a phone via Bluetooth or WiFi, and to a computer with a USB cable or by simply removing the memory card from the camera and inserting it into your computer.

Camera binoculars are a fun novelty and it probably reached its peak a decade ago. While most of what’s available today are knockoffs of one another, they’re not that expensive, so have at it. However, if you’re serious about photography or making videos, don’t buy camera binoculars —buy a digital camera, instead. But if you’re absolutely set on buying one, go for the best and get an ATN BinoX. It has all the features you need including 4K images, night vision, and smartphone compatibility.

For this article, we looked at everything available online about camera binoculars from Youtube videos to listicles. We also read through separate guides on binocular and camera technology. We used sources like REI, OpticsPlanet, and Wild Bird Watching. When researching individual products, we relied on user reviews published on e-commerce pages, independent blogs, and social media channels, as well. Learn more about our process by checking out the Task & Purpose review guidelines.