Would I Encourage My Kids To Join The Military? It Depends

I was on the phone with a financial advisor the other day as I stared at an account summary page... 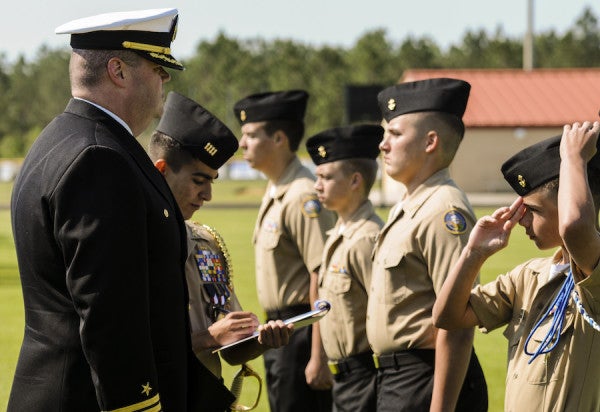 I was on the phone with a financial advisor the other day as I stared at an account summary page on my computer. The 529 college savings plan I opened when my son was an infant stared back at me.

“Well,” my advisor said, “That depends on a lot of things. How old is your son?”

“Okay, let’s say you have 12 years to save $100,000 for in-state tuition, if you add in inflation…” he punched into a calculator, “You should save about $944 a month. Of course there are always student loans. I always tell people, if you have to pick between retirement and education, pick retirement. People can borrow for education, not retirement.”

Thanks to the military, my parents never had to face the question of how to pay for my education. To me, student debt was like a sack of bricks my civilian peers had to drag around that I did not. But that's long over.

Now that I'm out of the military and far away from Uncle Sam's benevolence, I’m vulnerable to swings in the economy. These days, I think about my kids joining the military in practical terms.

So I had to ask myself, is joining the military a way to pay for my kids’ college and pave the way for their lifelong stability and opportunities, or not?

Here are some of the considerations I came up with.

With the signing of the Post-9/11 Veterans Education Assistance Act of 2008 — creating what’s known as the Post-9/11 GI Bill — the government provides veterans a launchpad for their lives. In a study by the RAND Corp., 24% of veterans, active-duty military, and eligible dependents surveyed reported that the existence of the new GI Bill drove their decision to enroll in higher education. For the nearly one-quarter of people eligible for the 9/11 GI Bill who are pursuing higher education, job prospects and job security after the military will improve versus if they had opted for a different career path without the possibility of a four-year degree. A look at unemployment rates from the Bureau of Labor and Statistics shows that in 2015, people with only a high school diploma registered at 5.6% unemployed, compared to less than half that, 2.5%, of people with four-year degrees.

Related: What the Marine Corps taught me about parenting »

Pro: Life in the military, at least from a benefits standpoint, is getting better.

With the military pension overhaul, the Department of Defense recognizes the pension as a major incentive for recruiting and retaining talented people. The “blended” system — 20-year cliff-vesting with a defined contribution — has at least one major benefit: government contributions into a portable retirement account. For the first time, service members who separate before 20 years can exit with a modest retirement benefit.

Pro: The military produces 22-year-olds with material responsibility and authority in the workplace.

Rather, recent graduates should ask, “What should I do with my twenties?”

Psychologist Meg Jay argues the importance of our twenties as a developmental and transformative period that only happens once. If you’re fortunate to be the parent of a “self-confident, knows-exactly-what-he-wants 18 year-old,” perhaps the military is inevitable. But if your kid, like the majority, is unsure which direction to head next, maybe it’s good to consider the military.

Sure, there are other jobs that offer formative experiences for twenty-somethings, but in my biased opinion, the military is special. No matter what branch of service, it offers young people a chance at real responsibility and opportunities for leadership and personal growth. Whether someone has served four years or 40, I think all vets consider their time in the military formative.

Con: The military is not for everyone.

I must also consider the other side of military service: the dark side all veterans have known one way or another.

The military is not for everyone. Some kids arrive too green for the multi-year, enforceable-by-law commitment they’ve made.

Those who suffer the most, at least at first, are kids with difficulties meeting the physical standards, such as height, weight, and minimum run times. There is also the dangerous nature of occupational specialties, like explosive ordinance disposal or infantry. Even driving a seven-ton vehicle in motor transport can be hazardous.

In peacetime, there is the ever-present and ominous possibility of war and the reality of having to experience it firsthand. It is this vague, dark image that looms when considering the service for someone we love, especially our kids.

Still, there is a noble side of military service.

There is a legacy left behind by all those who have served before. It’s the tradition and virtue in serving. The call to lead at the lowest rank. It’s the threads of service and selflessness and patriotism that weave through the military. It’s an organization affixed to a higher purpose.

Veterans know the different faces of serving in the military and must take it all into account when encouraging someone to join. If I consider the military for my kids, and remove the practicalities of benefits and opportunities, the question then becomes, which view of the military —the dark side or idealistic side — dominates my perspective?

Perhaps someday I would encourage my kids to join. But that decision boils down to personal experience, and what your children want.