Everyone In The Military Will Be Promoted One Time Too Many

Since 1947, the U.S. military has relied on a system called “up or out” in managing its personnel. While the... 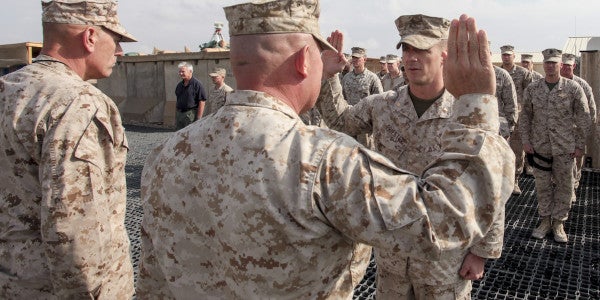 Since 1947, the U.S. military has relied on a system called “up or out” in managing its personnel. While the severity with which it has been applied has swung, pendulum-like, as the nation has repeatedly built up and drawn down the military, the basic idea has remained the same: Get promoted to the next rank within a certain timeframe or be separated from the service.

The goals of this system are reasonable at first glance. The military is generally structured like a pyramid, with a large number in the lower ranks being led by fewer and fewer leaders as you move up the echelons. Obviously, not everyone can keep moving up — “too many chiefs and not enough Indians” is a cliche about why some institutions fail. The theory is that good performance leads to good evaluations, which leads to promotions. The converse, then, is just as obvious — those who don’t get promoted must be deficient, so if people have to go, it should be those people.

This places the military at odds with a famous management idea called “The Peter Principle.” Put simply, it says that every employee will rise or get promoted to his or her level of incompetence. Many people take that to simply mean that bosses are stupid. In reality, it means that people get promoted until they are past the point at which they are competent at their jobs. This may or may not be discovered, but either way, it’s not good for the institution.

Related: What To Do When You Work For A Bad Leader »

The military needs to fight the Peter Principle, and keep people within their level of competence. Unfortunately, the system as it currently works does almost exactly the opposite. People who are good at their jobs at lower echelons have to follow scripted career paths leading to promotions if they want to stay in, even if all they want to do is be the best at their particular specialties. Almost everyone has to pretend that he or she wants to be a commanding officer, sergeant major, or master chief, because that’s the only way to survive. In some places, even admitting that you don’t aspire to those jobs is to guarantee a sub-standard evaluation, which leads to getting passed for promotion, which leads to the door out of the military.

Of course, there is a counterpoint. The military can’t let people just stagnate and coast with no consequences. It isn’t, or at least shouldn’t, be a jobs program. The military has to find a way to keep highly competent people in the jobs they’re good at, while still promoting those with the desire and ability to lead at higher echelons.

The services need to look at their manning and identify fields that can utilize long-term specialist expertise. Selected individuals in those fields, who would be mid-grade enlisted and officers, would be given the option stay in their occupational fields for extended periods of time, either in the operating forces or as instructors. They would forgo further promotions, but would instead become the “gray beards” — repositories of information and experience that others could rely on. They wouldn’t be subject to promotion boards, but they would still be screened by regular retention boards to ensure that they aren’t becoming stagnant. Their boards would concentrate on whether they were still productive experts, not on whether they were future senior leaders. Given time, the services could also use specialist ranks for enlisted and broaden the use of warrant officer ranks.

Currently, the system depends on a constant churn of individuals rotating between the operational forces and the supporting establishment. By keeping selected experts in the operational forces, the military could slow down those rotations, allowing those who are suited by ability and temperament for senior leadership positions to receive more training before assuming those billets. Those commanders and senior enlisted leaders would also gain a core cadre of long-serving subordinates to rely on. Currently, most of their subordinates spend their time scrambling to get the next checks in their boxes to ensure they get promoted and not get kicked out.

In the long run, such a system could reduce the need for huge numbers of fresh recruits to keep restocking the pyramid. The military could also look at whether some billets require the ranks that currently fill them. Many instructor and staff billets are filled by higher ranking individuals not because the job needs that rank’s authority, but that level of experience. For example, if a job needs someone with 20 years experience, today that automatically means it has to be filled with a high-ranking individual. If, on the other hand, the military had a cadre of experts, many of those positions could be filled by someone who actually is being paid to be an expert, not by a procession of ticket punchers. The military would become more junior in rank, but more senior in actual experience where it matters.

Personnel policy is not very glamorous. It doesn’t look cool on television. It doesn’t wow at airshows. It certainly doesn’t fatten businessmen’s or congressmen’s wallets, so there’s little incentive to fix it. In reality, though, it’s far more important than any gun, plane, or ship. How the military manages and rewards its people is how it shows what is important to the institution. People act in accordance with those incentives. Right now, the military rewards upward ambition to a greater extent than it should. Instead, it needs to create a system that rewards being good at your job.