For Those Who Fought In Marjah, It Was More Than Just A Battle

Five years ago coalition forces launched the largest military operation in the history of the war in Afghanistan, second only... 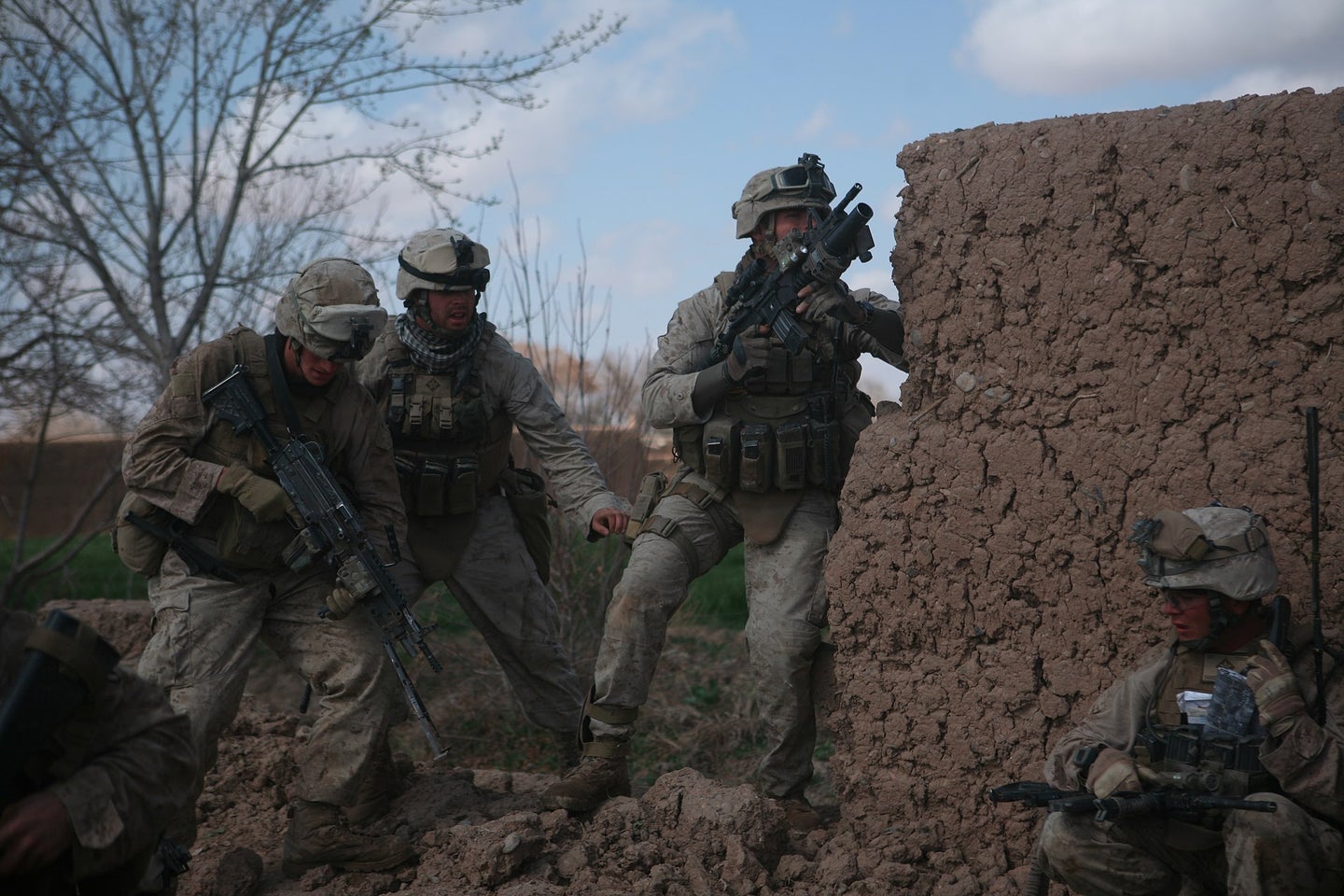 Five years ago coalition forces launched the largest military operation in the history of the war in Afghanistan, second only to the initial invasion. It was an all out assault on the Taliban-held city of Marjah spearheaded by the men of 1st and 3rd Battalions, 6th Marine Regiment. I was attached to Bravo Company 1/6 when we inserted into the city in the dead of night via helicopter and documented the operation from that first week of heavy fighting, to the end of the deployment in July 2010.

It was a major operation with a lot of combat, the kind that leads to sleepless nights, serious injury, and inevitably, the loss of friends. It was also the kind of mission that makes great headlines and builds careers for future military leaders, and war reporters alike. For those documenting the event from within the military, for people like me, it was the kind of mission that fills you with guilt, because you know you were sent there to lie.

I was a public affairs Marine and often still feel that I did a disservice to the men I served with by writing articles that failed to reflect the reality of what was happening, and the impossible task they had been given.

I wanted to tell the story of these Marines, but simply put, I wasn’t in the right business at the time to honestly and fully report on what happened. There was too much riding on the mission for any potentially contrary opinion, or information, to crop up from within the ranks no matter how minor it be. I remember the not-so-subtle hints and pressures to include “Afghan-led” in stories about patrols where there were no Afghan soldiers present.

While perhaps forgivable to some, this spin on coverage of the battle of Marjah meant that the fact these Marines were shouldering a burden initially meant to be distributed between U.S. forces and their Afghan counterparts was lost.

Fortunately, there was no shortage of independent media coverage for the operation; Marjah may have been the most heavily documented military engagement of that entire war.

It was heralded as being a great many things; the next Fallujah, the answer to the “Afghanistan problem,” — there was a palpable sense of tension and pressure tied to the mission. In his book “No Worse Enemy,” journalist Ben Anderson, who was with Bravo Company during the insert, wrote: “The world — and America’s enemies — were to be shown that the new policy could work; the Taliban could be removed, the population could be won over, the Afghans could secure their country themselves and we could leave.”

As a military and as a nation, that’s where we fucked up. We decided that Marjah was the solution, that it would provide a road-map to success, and just like that, out went the press releases, and in came the media.

The mission was supposed to be Afghan-led, with the grand architects going so far as to name it Operation Moshtarak, meaning togetherness. The plan was that after the battle was won, representatives from the Afghan government would move in to restore some measure of order.

Gen. Stanley McChrystal, then the head of U.S. forces and the ISAF coalition in Afghanistan, went so far as to call it a “government in a box” — the idea being that after the Marines cleared the Taliban from the city, and the local residents who had dispersed ahead of the attack returned, representatives from the Afghan government would stroll in with a pre-packaged government structure and take over. This “government in a box” included a new regional governor and a ready-to-go cabinet. It may have sounded great on paper, but if you let that sink in for a minute — yeah, it was never going to work.

Operation Moshtarak was essentially divided into two parts. The first was to take back the city where a few Marine companies inside engaged a large Taliban force — estimated between 400 to as many as 1,000 — that had months to prepare for our arrival.

Within an hour of us landing in Marjah, the sun began to come up — and that’s when it started. There was no single shot, and there was no single firefight, it all just collapsed and compressed into one composite shit storm.

During those first three days, more than once I recall being stuck in some wide open field as enemy rounds flew overhead; some close, some not, all the while wondering why the fuck I left the cover of a nearby mud wall. A rocket-propelled grenade flew into one of the compounds we were holed up in, bounced off the ground, slammed into a doorway and skidded to a halt, feet away without detonating. One night, a large underground propane tank ignited and sent up a pillar of flame 20 feet in the sky, looming over us.

During the first 72 hours, several Marines with Bravo Company were shot, and Cpl. Jacob Turbett was killed.

“I knew what it was going to sound like and feel like, but I wasn’t expecting the intensity on such a regular basis,” said Thomas Gibbons-Neff in an interview with Task & Purpose. He was on his second deployment at the time operating as a scout sniper team leader. The fighting was so sustained, intense and all consuming, that according to Gibbons-Neff, “For that first week, I forgot I had a girlfriend.”

Those first few days, the combat was so heavy, it’s no surprise that it grabbed national attention.

Then, just as suddenly as the battle began, it was over — we won — and it was time to begin the counterinsurgency operation. Those same Marines who days before were hard-as-nails trigger men, suddenly became de facto mayors, civil engineers, project leaders, and even had to handle local disputes.

“We tried to accelerate through the kinetic stuff fast and make it like a news flash, so it was over — Make it a quick triumph. Get the government out front and show success. There has to be a feeling of victory whether it’s true or not, its all a feeling of perspective,” explained Ryan Sparks to Task & Purpose, who was the commanding officer of Bravo Company.

While the fighting in Marjah to retake the city made international headlines, the actual long-term mission — replacing Taliban leadership with a functioning Afghan government — got little limelight.

“To be crass about it, from an entertainment aspect, nobody gives a shit about the COIN stuff,” said Sparks, who received the Leftwich trophy for his leadership and courage in combat. “Everybody wants to see heroes and be connected to dramatic events and fights for life. But, to be practical, nobody cares about the other stuff and so it’s not news.”

From its very outset the counterinsurgency, or COIN, mission had troubles far beyond media coverage.

“If you don’t get rid of the drugs, warlords and power structures nothing gets better,” said Sparks, referring to Marjah’s strategic value as the opium hub of Helmand province. Opium production was also the lifeblood of the local economy.

“No way out for them and they knew we weren’t going to fix it. And if we did, the alternative that we’d fix it with, they didn’t want,” Sparks added, alluding to the plight of Marjah’s local populace, who were predominantly opium farmers trapped in a system of farming poppy on someone else’s farmland.

I agree with Sparks’ sentiment, having written articles about crop transition programs where the U.S. military would encourage local farmers to grow crops such as corn instead of opium. It was an idea that anyone could see was poorly thought out, both at the time and in retrospect — it was a matter of simple economics and local politics. Afghan farmers made a lot more money with opium compared to other crops, and local drug cartels were unwilling to lose their principal source of income.

The final crack in Operation Moshtarak though was that the Afghan government really didn’t represent the people of Marjah and the locals knew it. I remember hearing that one of the residents asked an interpreter if the Marines in Marjah were part of the government. That’s how severe of a disconnect the government had with the Afghan people.

“The unfortunate part though, is that we were giving groups power over other groups unnaturally,” Sparks said, noting that we made a mistake by not letting “any natural power struggles happen. We came in and said it would be ruled from Kabul,” which, of course, failed because the Afghan government sent in soldiers and police officers from the North, who were as foreign to the Southern, ethnic Pashtun communities as we Marines were.

Ultimately, while incredible risks were endured, and sacrifices made by Marines and coalition forces, the battle for Marjah was set up for failure, at least in the long term. The more we pushed this concept of “Afghan-led” victories — while Marines did all of the heavy lifting — the less real it seemed to be. Looking back at it, five years later, the whole thing seems more absurd than triumphant.

With its two distinct missions, one of war and one of reconstruction, the Marjah deployment will forever be more than just a military operation, or a battle, especially to those who were there. It will never be a story just of success or failure. It will forever remain a part of who we are, as Marines who served there. And with time, and distance, our perspectives will continue to shift.

“It’s funny what memory does to something like that. Who you were in Afghanistan to who you are as a senior in ,” said Gibbons-Neff. “Looking back to me in Afghanistan is like a scene from a movie, or someone I used to know well, but we’ve grown apart. You remember the emotions that cut through time. Loss, fear, things like that. The memories still exist, they seem so much cleaner.”

The battle for Marjah was not restricted to one period of time, or one unit — it was ongoing, and a great many American and allied forces were injured or killed trying to succeed at an incredible undertaking. February 13th marks a half decade of growth and reflection for those who bear the unofficial title “Marjah Marine” and wherever you all are — reach out to a friend who was there, have a drink and remember where we were, and who we were, then — and be proud of who you are now.

“These relationships we’ve had in combat may have changed,” said Gibbons-Neff. “We’re all people — who we are then, who we are now. It’s a process. We grow and change. The battle of Marjah happened, but every year it goes by it gets a little bit different. I think it’s good to go through those changes together.”