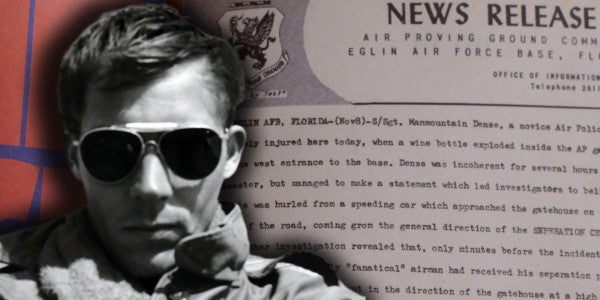 Even before Hunter S. Thompson achieved national acclaim as an author who roared down highways with the Hell’s Angels, and wrought havoc on the Las Vegas strip (in real life, in print, and on screen), he had a belligerent streak that was hard to hide, if he ever tried at all.

He certainly didn’t hide it when he was a young airman. Right before his discharge from the Air Force, then-Airman 1st Class Thompson published a fake news release about “one of the most savage and unnatural airmen” any senior leader had ever come across.

The protagonist of that short story, printed on official U.S. military letterhead and published to the base paper on Nov. 8, 1957 for all to see, was, unsurprisingly, Thompson.

The press release, which was included in Gonzo: Hunter S. Thompson, a collection of photos and letters from his life, and reprinted in Proud Highway, a collection of his personal correspondence, is a beautiful and belligerent salvo aimed right at his superiors:

EGLIN AFB, FLORIDA (November 8)–S/Sgt. Manmountain Dense, a novice Air Policeman, was severely injured here today when a wine bottle exploded inside the AP gatehouse at the west entrance to the base. Dense was incoherent for several hours after the disaster, but managed to make a statement which led investigators to believe the bottle was hurled from a speeding car which approached the gatehouse on the wrong side of the road, coming from the general direction of the SEPARATION CENTER.

Further investigation revealed that, only minutes before the incident at the gatehouse, a reportedly “fanatical” airman had received his separation papers and was rumored to have set out in the direction of the gatehouse at a high speed in a muffler-less car with no brakes. An immediate search was begun for Hunter S. Thompson, one-time sports editor of the base newspaper and well-known “morale problem.” Thompson was known to have a sometimes overpowering affinity for wine and was described by a recent arrival in the base sanatorium as “just the type of bastard who would do a thing like that.”

An apparently uncontrollable iconoclast, Thompson was discharged today after one of the most hectic and unusual Air Force careers in recent history. According to Captain Munnington Thurd, who was relieved of his duties as base classification officer yesterday and admitted to the neuropsychological section of the base hospital, Thompson was “totally unclassifiable” and “one of the most savage and unnatural airmen I’ve ever come up against.”

“I’ll never understand how he got this discharge,” Thurd went on to say. “I almost had a stroke yesterday when I heard he was being given an honorable discharge. It’s terrifying–simply terrifying.”

And then Thurd sank into a delirium.

Now, none of that should come as a surprise to anyone familiar with his novels, or the numerous stories Thompson later wrote in the style of Gonzo journalism — a form of writing coined by Thompson in which the author places his or herself at the center of the story, more an active participant than passive observer.

And just as iconic as his works were Thompson’s antics, which included, among other things, a failed bid for Sheriff of Pitkin County, Colorado, after he ran on a platform promising to rip up city streets with jackhammers, rename the town of Aspen to Fat City, and that “it will be the general philosophy of the Sheriff’s office that no drug worth taking should be sold for money,” an approach Thompson said would “establish a unique and very human ambiance in the Aspen (or Fat City) drug culture,” as described in The Great Shark Hunt, which includes a mix of his letters, musings, and commentary.

Thompson’s wild, drug-addled, fast-living, free-wheeling writing, and “buy the ticket, take the ride” spirit seemed to flow into everything he did, and was even there at his funeral in 2005, at his home in Woody Creek, Colorado, when his ashes were fired out of a cannon.

But in 1956, long before any of that, Thompson was a 19-year-old in uniform, freshly enlisted in the U.S. Air Force, and his superiors at Eglin Air Force Base in Florida, had no fucking idea what was about to hit them.

Through a fortunate turn of fate, Thompson found himself working as a sports editor at The Command Courier, the base newspaper, and who knows what we’d be missing in life had he never landed that first gig.

By all accounts, he was a talented writer from the get-go, but that’s where his commander’s praise stopped.

According to Proud Highway, in an Aug. 23, 1957 personnel report, Thompson’s commander, Col. W. S. Evans with the Office of Information Services (the precursor to today’s public affairs and strategic communications offices) wrote the following:

1. A/2C Hunter S. Thompson, AF 15546879, has worked in the Internal Information Section, OIS, for nearly one year. During this time he has done some outstanding sports writing, but ignored APGC-OIS policy.

2. Airman Thompson possesses outstanding talent in writing. He has imagination, good use of English, and can express his thoughts in a manner that makes interesting reading

3. However, in spite of frequent counseling with explanation of the reasons for the conservative policy on an AF base newspaper, Airman Thompson has consistently written controversial material and leans so strongly to critical editorializing that it was necessary to require that all his writing be thoroughly edited before release.

4. The first article that called attention to the writing noted above was a story very critical of Base Special Services. Others that were stopped before they were printed were pieces that severely criticized Arthur Godfrey and Ted Williams that Airman Thompson extracted from national media releases and added his flair for the innuendo and exaggeration.

5. This Airman has indicated poor judgment from other standpoints by releasing Air Force information to the Playground News himself, with no consideration for other papers in the area, or the fact that only official releases, carefully censored by competent OIS staff members, are allowed.

6. In summary, this Airman, although talented, will not be guided by policy or personal advice and guidance. Sometimes his rebel and superior attitude seems to rub off on other airmen staff members. He has little consideration for military bearing or dress and seems to dislike the service and want[s] out as soon as possible.

7. Consequently, it is requested that Airman Thompson be assigned to other duties immediately, and it is recommended that he be earnestly considered under the early release program.

8. It is also requested that Airman Thompson be officially advised that he is to do no writing of any kind for internal or external publication unless such writing is edited by the OIS staff, and that he is not to accept outside employment with any of the local media.

According to Letters of Note, an online archive of correspondence from artists, authors, and public figures, Thompson was pulled away from an editorial role following the less-than-favorable performance evaluation, which also called for his early discharge from the Air Force.

And a few months later, that day came, and with it, Thompson’s last jab at the top brass: Laid out in neat print was a Gonzo-style press release unlike any other, before or since.