How Do You Make A Veteran An Entrepreneur?

Millions of Americans who have served their country in the military must figure out how to transition and contribute to... 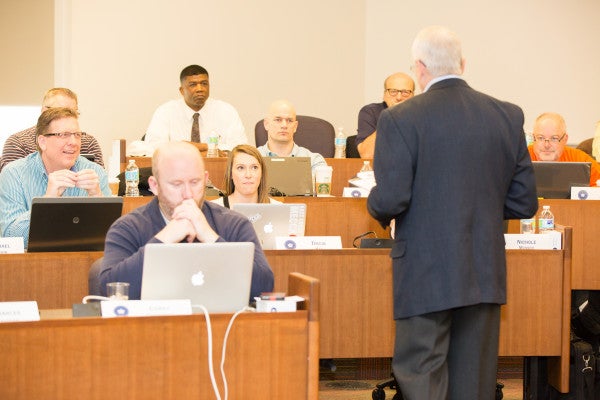 Millions of Americans who have served their country in the military must figure out how to transition and contribute to the American economy as private citizens. For many, the answer lies in entrepreneurship. A 2011 report from the U.S. Small Business Administration asserted that veterans are 45% more likely to be self-employed than those with no active-duty military experience

But for service members leaving active duty and tackling transition into the civilian sector, going from the military to launching and operating a successful small business can be daunting. How do you make a veteran an entrepreneur? To find out, Task & Purpose went to Syracuse University in Upstate New York, where the Institute for Veterans and Military Families hosts the Entrepreneurship Bootcamp for Veterans With Disabilities.

In order to create a support system for veterans looking to create or grow their own businesses, in 2007, Syracuse University’s Institute for Veterans and Military Families created the Entrepreneurship Bootcamp for Veterans, an intensive course designed to empower disabled veterans and their families with the knowledge and network needed to build a thriving entrepreneurial project.

In the time since, the program has expanded to business schools at seven top universities beyond Syracuse — Cornell, Louisiana State, Connecticut, Purdue, Florida State, UCLA, and Texas A&M.;

More than 1,000 students have graduated from the program in 2007, according to Syracuse. Roughly two-thirds of graduates have gone on to start their own businesses. Each graduate has created almost five jobs within his or her business, and collectively, these businesses have generated nearly $200 million in revenue.

And so the Entrepreneurship Bootcamp for Veterans with Disabilities — which runs two programs, one for disabled veterans and one for their families — is undoubtedly successful. Each class takes place over the course of 14 months and includes online courses, two weeks of intense classroom participation, and 12 months of mentorship and oversight.

Task & Purpose joined in on part of the classroom settings during the most recent course at Syracuse University in March. More than 20 veterans from all branches of the military, and representing wholly different demographics and backgrounds, came together to chart a path toward becoming successful entrepreneurs.

“It's been a very inspiring week,” Tina Kapral told Task & Purpose. Kapral is the director of residency programs for the Institute for Veterans and Military Families, and in that role oversees the veterans entrepreneurship program. “It certainly involves long and difficult days for the students because we're trying to put so much education into such a small window, but they're all doing great.”

Among the veterans attending the March bootcamp was Navy veteran Mike Merwin, who hopes to grow his beef jerky business, Crazy Mike’s. Merwin has been making beef jerky for well over a decade, but just recently registered the business. He said that the Entrepreneurship Bootcamp for Veterans with Disabilities helped him figure out how to turn what has been a hobby into a self-sustaining business venture, one that can support him financially.

“I've learned a lot here and I'm excited. My challenge is going to be, you know I've got a full time job, I've got bills to pay, and I need to expedite cutting the cord as quickly as I can,” Merwin told Task & Purpose.

Merwin retired in 2004 from a two-decades long career as a nuclear submarine officer and later a Naval reservist. He presently works as the quality manager for a mechanical engineering company in Albany, New York.

Merwin said among the most important lessons from the program was on bootstrapping, the practice of financing a business venture self-sufficiently.

Kapral said the ability to bootstrap a business was one of the things that made military veterans such effective entrepreneurs.

“Veterans may or may not realize it, but they already have so many skills that are what it takes to be an entrepreneur,” Kapral explained. “Everyone would say, first the leadership, but they also are very used to having to have a backup plan; and they're used to risk, calculated risk and making decisions quickly under pressure; they know how to course-correct, so if something doesn't work, okay, we're going to try this; and the bootstrapping piece, of making it work even if you don't have what you necessarily need to make it work.”

Merwin was joined at the bootcamp by more than 20 other veterans, such as Mike Fitzpatrick, an Army infantryman who recently transitioned to the National Guard in Boston, Massachusetts. Fitzpatrick is working to start an independent security firm that provides K-9 assets to law enforcement organizations.

“I don’t think this venture would get off the ground as quick as it’s going to ,” Fitzpatrick told Task & Purpose. “It would have taken a lot more time and a lot more trial and error.”

Fitzpatrick and Merwin both spoke of the diversity of background, experience, and ambition among the class of veterans as an asset to learning how to be an entrepreneur.

Kapral agreed; she said that with every class, relationships and cohesion begin to emerge during the discussion board and online training, but by the time everyone is on campus, they’re a closely knit team.

“It's not until they arrive on campus that they really make those relationships stronger; and then by the end of the week, they've all gone through the same process, so everybody is getting up at 7:30 in the morning and not getting back to the hotel until 10:00 at night,” Kapral said.

It’s a model that has turned more than a thousand veterans into entrepreneurs, and Kapral hopes the program keeps making a difference.

“I hope it continues to grow. I would love to have more universities, more business schools join us. There is a waiting list for us to get students into the program,” she said.

CORRECTION: The Director of Residency Programs at Syracuse University's Institute for Veterans and Military Families is Tina Kapral. An earlier version of this item misstated her name. (2/6/14)