How Long Does It Actually Take To Get Out Of Shape? 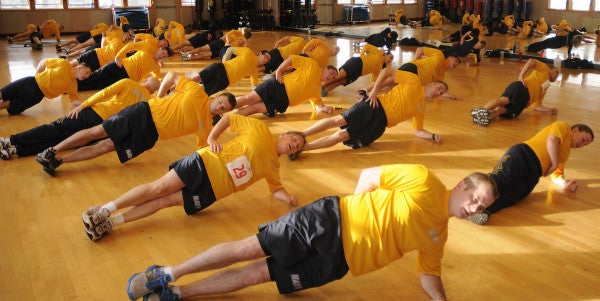 Don’t let anybody tell you different — everyone has skipped a workout at some point. At Greatist, we’re firm believers in cutting yourself some slack and taking time off from exercise when you need to. But we also know how easily three days off can snowball into six, then 10. Before you know it, you’re asking that question we’ve all asked when the gym feels like a distant memory: How long does it take to lose my fitness?

First, it’s important to remember that taking time off now and again is a good thing — exercise inflicts a degree of stress on the body, and any good workout program includes a heck of a lot of rest days, especially if the exercise is very intense. And there's a benefit to both “active recovery” and complete rest.

That said, “use it or lose it” is pretty much the rule. But exactly how much fitness you’ll “lose” depends on the length of your break and how fit you were to begin with.

If you exercise on the regular

It’s a lot easier to bounce back from time off if you’re someone who exercises five or six times a week, or if you’ve been exercising for a while.

Generally speaking, if you’ve been working out several times a week for more than a year, your muscle memory is solid. In fact, with that strong of an exercise habit, scientists are quite willing to drop you in the “athlete” category. And for athletes, your fitness can deteriorate at different rates depending on whether you're looking at strength or cardiovascular losses.

For most people, strength loss occurs after about two and a half to three weeks of inactivity, says Molly Galbraith, a certified strength and conditioning specialist and co-founder of Girls Gone Strong. But it depends on why you take the break.

“If you are sick, your body is overstressed, so you’ll start to lose strength after two to three weeks,” she says. “If you’re not sick, and especially if you’re able to get in some movement and light exercise, you can probably take three, four, even five weeks off without significant strength loss.”

Science agrees. Medicine and Science in Sports and Exercise published a review of several studies on the subject that looked at runners, rowers, and power athletes. For all of these groups, muscular strength fibers appear not to change, even after a month of inactivity. But here’s the kicker: While general strength doesn’t change much in that period, specialized, sport-specific muscle fibers start to change in as little as two weeks without a workout. For example, endurance athletes lose a significant amount of the extra slow-twitch muscle fibers that they worked so hard to accumulate, and the same thing happens for the power athletes and their hard-earned fast-twitch muscle fibers.

Basically the body likes to hold onto strength for as long as it can, but skills that are very specialized for certain sports will decline faster. We're generalists, what can we say?

So what about all the cardio lovers out there who are more concerned with the strength of their heart and lungs? Sadly we lose this kind of conditioning a little more quickly than we lose strength. One study of endurance cyclists found that four weeks of inactivity resulted in a 20% decrease of their VO2 max, which measures a person’s maximum capacity to take in, transport, and use oxygen during exercise. The results were more or less confirmed by another study, which found that after 12 days of inactivity, VO2 max dropped by 7% and enzymes in the blood associated with endurance performance decreased by 50%.

But keep your chin up. While your cardio conditioning does fall faster than your strength, it’s easier to regain, Galbraith says. So get back on that horse, cowboy.

If you’re newer to exercise

Congratulations on your new-ish exercise habit! But if you’ve hit pause on your trips to the gym, don’t take too long to hit play again. Consistency is key for building new habits, and it’s as true for the body as it is for the mind: If your body hasn’t been enjoying exercise for long, it can be easier to lose the progress you’ve made.

As far as strength goes, it’s best not to be too concerned about losing your headway, as those famous “newbie gains” make it somewhat easier to retain strength.

For example, previously untrained folks who took a three-week break in the middle of a 15-week bench press program finished the course with similar strength levels as those who didn’t take a break at all. One study even showed that six months after quitting a four-month strength training program, up to 50% of the original strength gain was maintained. It's also worth noting that among newbies, eccentric strength, that is, the strength used when lengthening a muscle or lowering a weight, may be harder to lose than concentric strength, which is when the muscle is contracted. A study of 13 previously untrained guys found that three months after ending a three-month training program, they had maintained their eccentric strength gains, but not their concentric strength.

Once again, cardio is a little more sensitive to time off. One of the best studies of the effects of detraining on recently acquired fitness gains found that VO2 max gains that were made in the last two months are completely lost after four weeks of inactivity.

While your fitness level is key to how quickly you get back to your fitness baseline, there are a few other variables that also come into play.

First, age plays a role in your bounce-back time. When looking at 41 people who were either 20 to 30 years old or 65 to 75 years old, the older subjects lost strength almost twice as fast as the whippersnappers during a six-month “detraining” period in one study .

And again, why you’re taking the break is also a factor. When scientists injected inactive volunteers with hormones that mimicked the stress of trauma or illness, they had a 28% decrease in strength over 28 days — a higher rate than average.

4 ways to make the most of a fitness break

Whether you're on a relaxing vacation or stuck on the couch with an annoying chest infection, there are a few ways to stay strong during downtime.

“If you’re able to take plenty of brisk walks, keeping your heart rate in the 120-ish range, then you should be able to stave off losing conditioning for a little longer,” Galbraith says. Indeed, training a little will do a much better job of maintaining your gains than totally stopping, especially if you’re able to squeeze in the odd cardio session that’ll train you at the upper end of your VO2 max, like some quick intervals.

There are plenty of reasons for taking a break, but if you have a localized injury, say in your ankle or wrist, don’t use it as an excuse to completely stop exercising. Cross-train through injuries, if you can. Do some bodyweight exercises, or see if you can try swimming, which is the go-to exercise for a lot of injured athletes. Even a four-minute tabata or two will make a huge difference in maintaining your strength.

“Light, dynamic warm ups are also a good way to help keep the body from getting too stiff and to slow the loss of mobility without putting too much additional stress on an overstressed body,” Galbraith says. But if you’re sick from the neck down — think achy muscles, chest congestion, fever — it may be best to rest, she adds.

Exercise helps to control junk food cravings, so you may need to try harder to avoid crappy food while you’re not working out. Get lots of protein, healthy fats, and low-GI carbs, and your body will thank you. Eating well will help you avoid any weight gain, which would make restarting fitness all the more challenging. And nutrient-dense foods will also speed up your recovery if you’re injured or ill.

Galbraith also suggests raw honey for its antibacterial and antimicrobial properties, homemade bone broths for hydration, and garlic to lessen the severity of cold symptoms if you're under the weather.

No, not like that. But it’s important not to judge yourself or lapse into self-loathing on account of taking some time off. The gym will be right there waiting for you when you’re ready for it, but for now, do what you can and do what makes you happy. If it’s seeing what life is like without exercising so darn much, you do you! Look in the mirror, say a body-positive mantra, and know that you’re perfect—no matter how often you hit the gym.

This article, “How Long Does It Actually Take to Get Out of Shape?,” originally appeared on Greatist.