"You’re just in a world of predators who are trying to attack you in the same uniform.” 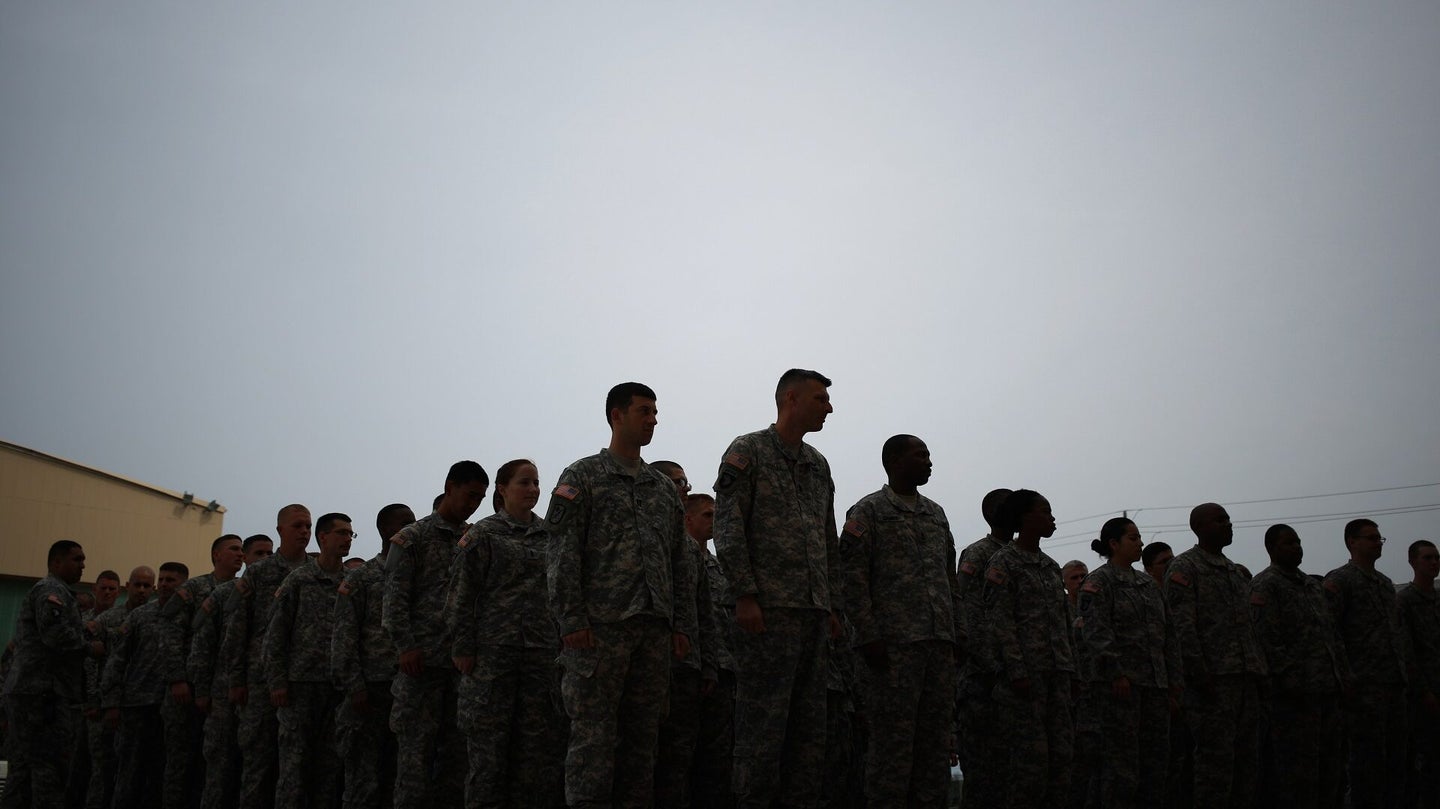 Editor’s note: This article was originally published by The 19th. If you’re thinking about suicide or are worried about a friend or loved one, the National Suicide Prevention Lifeline is available 24/7 online or at 1-800-273-8255. And anyone affected by sexual assault, whether it happened to you or someone you care about, can find support on the National Sexual Assault Hotline online or at 1-800-565-4673.

Everything had been done right. With the help of her lawyer, Jane, a 22-year-old member of the Nevada National Guard, secured a civilian protection order in January 2020 to protect her from her attacker. The judge checked the “sexual assault” box, explicitly acknowledging the crime.

But the legal victory didn’t fix everything.

Jane, who remains on active duty, is being identified with a pseudonym because she still fears professional and personal retaliation after reporting a higher-ranking officer had sexually assaulted her multiple times over months. Even after the court order, she continued to see her attacker walk past her office and in the buildings she frequented on base. Her lawyer, Lindsey Knapp, a long-time advocate for sexual violence survivors, requested an expedited transfer on behalf of her client, but for 790 days, the request was repeatedly denied and delayed, all while Jane said she faced repercussions at work — increased monitoring from superiors, accusations that she was lying and a danger to others and orders to get counseling when invoking her right to an attorney.

Still, Knapp considered the judge’s ruling “lucky.” Jane’s case would have faced far steeper odds in the military justice system, in which the accused’s commander is the sole person who decides whether an allegation goes to trial. Knapp likened the current system to a parent handling their child assaulting another kid. That parent, no matter how good or bad, is more likely to deny wrongdoing, mediate internally or sweep it under the rug, she said.

“She was assaulted while working as a civilian employee and also while in a Guard status, so she’s lucky in the sense that she even has any kind of legal recourse,” said Knapp, the executive director of Combat Sexual Assault, a nonprofit focused on helping survivors and their families exercise their legal rights. “No other active-duty person in her similar situation would have.”

This week, Knapp joined Amy Braley-Franck, a decades-long military victim advocate who was suspended after blowing the whistle on sexual assault, and other survivors and advocates to launch Red, White, and Bruised, a campaign demanding legislative and policy changes to how sexual assault is handled in the military. Several of the women behind the campaign, including Braley-Franck and Knapp, were previously hired to work as victim advocates for the military’s sexual assault prevention program before being fired or let go after voicing concerns about how commanders were handling accusations.

More from The 19th

‘They just gave up’: More than two-thirds of the military community report challenges to building a family

Stalking survivors, mostly women, often ‘suffer in silence.’ We still don’t know how to stop it.

Braley-Franck said she spent years of her career working in various capacities for the military, as a victim advocate to a sexual assault response coordinator to a program manager that reported directly to some of the highest-ranked officers. She helped create training materials and guidance that is used across the Defense Department. When she brought up concerns about improper handling of investigations and alleged obstruction of justice to leadership, she was suspended from duty despite using the proper internal channels and processes. And Braley-Frank said she’s been advocating for change ever since.

“Our forefathers warned not to allow the military to become its own siloed governmental process,” said Braley-Franck. “We’ve allowed it to become that, and it’s dangerous. We need a strong military but we can’t have them operating outside of federal law.”

The campaign launched during National Sexual Assault Prevention and Awareness Month, and  includes seven concrete demands: the resignation of high-profile officers who they say have obstructed justice; for Congress to open investigations into U.S. Army Forces Command, Army Reserve Command and Fort Bragg; passage of the Military Justice Improvement and Increasing Prevention Act of 2021; allow service members and veterans to sue the federal government for accountability; bar “credibly accused” perpetrators of domestic violence, child abuse or sexual assault crimes from being employed with the Defense Department; charge and prosecute people with obstruction of justice for interfering with the reporting of sexual and domestic abuse; and improve transparency in investigations of military sexual misconduct.

The campaign comes months after the passage of the 2021 National Defense Authorization Act, legislation that is passed annually to make changes to the country’s defense agencies and provide guidance on how military funding should be spent, gave uniformed service members a 2.7 percent increase in pay, eliminated the “pink tax” on military uniforms, and expanded child care access.

Rep. Jackie Speier’s Vanessa Guillén Military Justice Improvement and Increasing Prevention Act was also included. The California lawmaker’s provision will remove cases of sexual assault, domestic violence, stalking, murder, manslaughter, kidnapping and other special victim offenses from the victim’s and assailant’s chain of command.  Sen. Kirsten Gillibrand’s broader companion bill in the Senate, however, was stripped from the NDAA in the final days of closed-door negotiations. The law — which she has tried and failed to pass every year since 2013 — would remove military commanders entirely from the chain of command in all serious crimes, meaning any felony-level offense.

“Though this agreement clearly does not include everything my colleagues and I pushed for, it is a giant leap forward for survivors of sexual assault and marks a watershed moment in the fight for justice for those failed by the current system and the family members of those slain or who died by suicide as a result of that failure,” Speier said in a statement following the NDAA’s passage, adding that she plans to spend her last year in Congress expanding this work.

Speier’s provision will take effect in late December 2023, but Gillibrand will continue to push for broader reform to avoid creating a “pink court” that might further stigmatize women service members disproportionately.

Knapp said all of that, plus a rise in active-duty military suicides, makes her campaign urgent.

“Why now? The NDAA lacked a significant amount of accountability,” Knapp said. “We really need to keep the pressure on because we don’t want the public to think that everything is OK … Our service members are literally dying. Some of the clients we represent are service members’ parents because their child killed themselves after being retaliated against for the assault. It’s really, really hard — and the military could stop it.”

Reports of sexual assault in the military continue to rise, and reports of retaliation after reporting have also been increasing.

It’s what Jane said happened to her. Knapp shared official documentation related to Jane’s case with The 19th, including police reports, medical records, military orders and emails sent to and from commanders.

For months in 2019, according to a police report, a higher-ranking officer isolated her from others, instigated inappropriate touching, pulled his pants down at work, handcuffed her, drove her across state lines and eventually forced himself on her. Jane began to fear for her life, contemplated taking her own and sustained injuries requiring surgery and months of physical therapy. Despite compiling more than 600 pages of evidence, testimony and witness statements, the Reno police closed their criminal investigation into Jane’s attacker at the military’s request to take the lead.

“It was like a nightmare every night — I basically threw up every night after reporting,” Jane told The 19th in an interview where Knapp was also present. “Everybody on base found out about my sexual assault even though it was supposed to be private … That was very hard. You sign up to be with leaders who you think are your service brothers and sisters who are supposed to work together to help defend your country. But instead, you’re just in a world of predators who are trying to attack you in the same uniform.”

When reached for comment, the Nevada National Guard said that it “handled this case appropriately” with multiple independent investigative agencies determining the same.

Regulations require all unrestricted reports of sexual assault — in which both law enforcement and military command are notified — to be referred to civilian law enforcement and a response coordinator. Jane’s case was investigated by the Reno Police Department and six other law enforcement agencies in 2019 and 2020, and none found the “requisite probable cause to press charges,” the Guard said in a statement.

The Guard found wrongdoing and classified the officer’s actions  as “committing adultery and fraternization.” It added: “These are violations of military regulations, but are not criminal offenses.”

In the meantime,  Jane, who had tried unsuccessfully to move to a different base for more than a year, was told her transfer had to be delayed again because of a “mental health condition.”

“I hit rock bottom,” Jane said. “I felt alone, like nobody cared … There was no way out, and that’s how they made me feel.”

Nearly 1 in 4 women in the military report having experiencing sexual assault and more than half report harassment, according to a 2016 analysis of scores of articles published in the peer-reviewed journal Trauma, Violence and Abuse. And the vast majority of incidents go unreported, according to research conducted by the RAND Corporation, which provides research and analysis to the U.S. Armed Forces. In 2018 alone, about 6,000 sexual assaults were reported to the Defense Department, but surveys suggested more than 20,000 service members were sexually assaulted. Women are leaving the military at higher rates than men, citing sexual assault as a major factor.

“It’s always been this bad,” Knapp said. “But what we’re seeing more now is service members are just getting more and more brave. To be honest, these young kids — I call them kids, because I feel like they’re my kids — that are serving now, they’re starting to find their voice in a way that service members in the 80s, 90s and early 2000s had difficulty doing.”

Jane was finally transferred on March 7 to a National Guard base in another state, but only after Knapp reached out directly to Gen. Mark Milley, the 20th chairman of the Joint Chiefs of Staff and the highest-ranking military officer. The criminal investigation by local law enforcement had already been closed, and the case transferred to military investigators with the National Guard Bureau Office of Complex Investigations — which declined to investigate further given the “most extensive report” already conducted by local law enforcement. Jane’s attacker was eventually discharged from the military in March 2021 under other than honorable conditions but doesn’t face any open criminal litigation.

Jane wanted to have a long military career, and maybe make chief or lieutenant colonel before retiring. But that no longer seems like an option, she said, adding she can’t afford to relocate or commute for mandatory drills at her new base and will likely be forced to leave the military when her enlistment commitment ends later this year.

Now, she just wants to make sure other people won’t have to go through what she did.

“Everybody knew about this,” Jane said. “Why didn’t anybody else fight hard enough for me? Why didn’t anybody care about me? So I was like I’m going to fight for everybody else because whenever the next [Jane] comes on base and she wants to be chief — they should be allowed to just get there. There’s so many struggles, but sexual assault shouldn’t be one of them.”

Join us in building a stronger nonprofit newsroom model together. Become a 19th member today.