What We Lose When We Give Away Purple Hearts 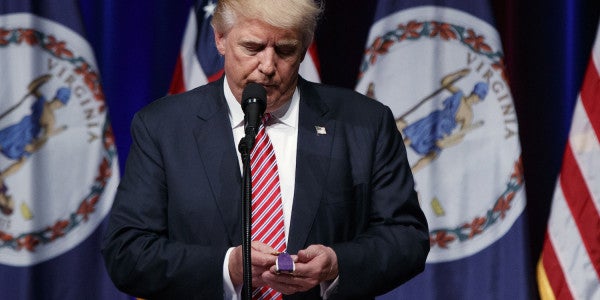 For approximately 500,000 living veterans, a chord was struck with these words, and for many of us it was not a pleasant sound. And that number is only about a quarter to a third of those who have received the medal over the course of history. Many recipients never even saw the profile of Gen. George Washington in their hand or wore it upon their uniform; it was presented instead to their surviving spouses or parents along with a folded flag. It wasn’t easy in the least, not for any of us.

You see, for those of us men and women who have felt real pain and the ramifications of real hate — not the superficial nonsense Trump displays in all his blustering at perceived or real verbal insults — we didn’t “get” the Purple Heart. There is no “getting” that award just as there is no “wanting” it. None of us volunteer for combat with the hope that we will come home in pieces, and some among us don’t get to come home at all. It’s not supposed to be easy to receive those medals. The meaning is lost when we start giving them away to people who don’t understand that.

I, for one, would rather have my memories back, be able to breathe without pain searing my brain ahead of a rainstorm, walk in a straight line, and tell the difference between my friends and strangers. That would be preferable to the purple ribbon on my dress blues.

I didn’t want the award because I knew it meant at least a piece of me would be left behind. We didn’t get the award; we each traded something for it. We traded our brains, our limbs, and many times our lives for that piece of metal.

So Trump’s words were accurate. Yes, it is big stuff. That medal symbolizes my sacrifice and the sacrifices of all those for whom that citation was read before and after me. But he didn’t have to trade anything. Trump didn’t raise his right hand to take the oath to complete the required trade for the metal should it become necessary in a fight for his fellow military members’ lives. He saw no action, no merit, no wounds, no military service.

But Trump got it. Right there tucked in his coat pocket, he got a Purple Heart. It was not awarded, it was not earned, he didn’t even have to spend $40 shipping from Marlow White since someone gave it to him. But Trump did, in fact, “get” one. That’s the only word for it. And I even believe that, yes, he wanted to get one. He certainly didn’t want to give something up for it; not his life or limbs or eyesight or the internal infrastructure that powers the mind.

Me, I traded a piece of myself for mine. No give-backsies on that trade, either. I am stuck with a Purple Heart as a constant symbol of what I used to be, and it reminds me what I had to go through after I got it. Maybe Trump can keep his as a way to remind himself of whom he could have become, maybe it will even inspire him to act with the merit inscribed on the back — to treat those around him with a bit of respect, honor, and humility. I don’t know that it has such power, but what are we if we don’t have hope, right?

Trump got what he wanted. I hope it does more than sit in his coat pocket and make him feel proud of how easy it was. I hope it makes him reconsider some of his definitions of sacrifice and honor.

But while I wait for that day, as I simultaneously wait for hell to freeze over, I’ll just sit here and reflect on how proud I am that he’ll never get mine.