Even The Romans Were Better At Doing Counterinsurgency Than We Are

Editor's note: This is the depressing conclusion of a chapter on the Romans from a new book, The Many Faces... 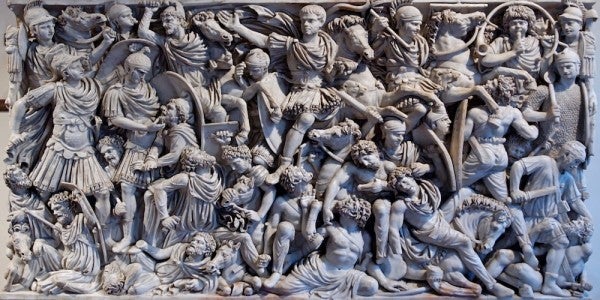 Editor's note: This is the depressing conclusion of a chapter on the Romans from a new book, The Many Faces of War.

What is the relevance of the Imperial Roman Way of War and Counterinsurgency for America today? Despite possessing an army noted for its skill in decisive battles, the Romans faced some 120 instances of insurgency between 31 BC and AD 190.

Unable to achieve overwhelming force everywhere, the Romans developed a sophisticated approach to solving these insurgencies. While historians have often focused on the Roman army’s role in counterinsurgency, the Romans succeeded because the imperial administration and others developed mutually beneficial long-term social, cultural, and economic ties with their subjects. Tacitus tells us that Agricola brought urban life and ways to Britain and encouraged the learning of Latin (Agricola, 72-3). To copy a well-known phrase from the 60s, this is “winning hearts and minds,” but it is also about establishing relationships that bring people over to your side. David Kilcullen in Counterinsurgency (2010: 152) offers a compelling explanation called the “theory of competitive control”: namely that:

in irregular conflicts, the local armed actor that a given population perceives as most able to establish a normative system for resilient, full-spectrum control over violence, economic activity, and human security is most likely to prevail within a population’s residential area.

While Kilcullen’s concern is combating insurgents, the basic argument remains: simply, whoever does a better job at establishing a resilient system of control that brings order and security is ultimately going to gain people’s support and win the competition for government. This is what the Romans did and with great success. One need only remember the hundreds of thousands of provincials who signed up for military service as auxiliaries with the aim of becoming a Roman citizen.

The Romans also always considered the impact of strategic communications on their image and adeptly ensured that their actions were publicized with social elites to deter potential insurgents. Militarily, the Romans developed a doctrinal response to an insurgency that included a prompt offensive reaction with immediately available forces that could sometimes be successful. While preferring set piece large battles that favored their strengths, the Romans could also wage campaigns of small engagements. However, they also found that counterinsurgency operations frequently take a long time, require an adequate and sustained force structure, and must be enabled by local allies.

As far as force structure, Imperial Rome found that the combination of heavy infantry citizens in legions enabled by lighter and more mobile non-citizen auxiliaries, and occasionally naval forces, sufficed for both ends of the spectrum of conflict. In addition, as the Empire grew, the Romans employed non-citizens more effectively and in larger numbers, especially for security over large areas, despite the occasional mutiny. The Empire also faced challenges of a contemporary flavor: lack of interagency coordination, incompetent leaders, divided loyalties of indigenous people, and adaptive enemies. Finally, the Romans realized that winning the peace with a “whole government approach” proved more successful than just winning battles.

Excerpted, with permission, from The Many Faces of War, edited by Lawrence Tritle and Jason Warren and published by Tsehai. ©2018. All rights reserved.