Winston Churchill, Scott Kelly, And Racism: Grow Up, Everybody

Some thoughts on this tweet from astronaut Scott Kelly apologizing for using a Winston Churchill quote: Churchill saved the West... 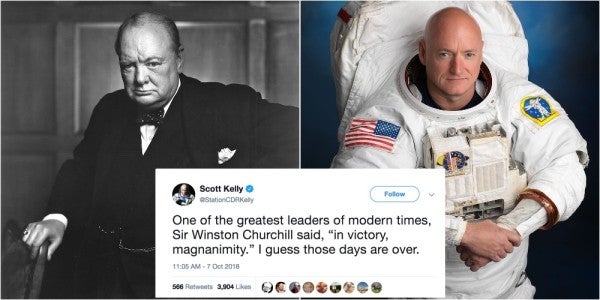 Some thoughts on this tweet from astronaut Scott Kelly apologizing for using a Winston Churchill quote:

Did not mean to offend by quoting Churchill. My apologies. I will go and educate myself further on his atrocities, racist views which I do not support. My point was we need to come together as one nation. We are all Americans. That should transcend partisan politics.

Churchill saved the West in 1940. But he also was a man of his time, and an imperialist to boot. He said racist things. Likewise, George Orwell wrote bizarrely anti-Semitic stuff at times. He also is pretty bad writing about women — some of the scenes in ‘1984’ are cringeworthy.

Conclusion: People are complex and flawed.

“Ricks never took up arms against climate change, even when it was clear that it was the top global priority. He even continued to eat meat. Let’s liquidate his books.”

In this vein, my wife, who wrote a terrific book about the largest attempted slave escape in American history, argues for a distinction between people who owned slaves (pretty much anyone with any money in the American South in the 18th and 19th centuries) and people who fought to maintain the system of slavery (for example, Robert E. Lee).

So, by her standard, it is OK to retain the name of a city named for Stephen Austin, but not to keep a road named for General Lee.