During a routine sonogram appointment on Sept 12., an unborn baby floating in its mother’s womb appeared to render a... 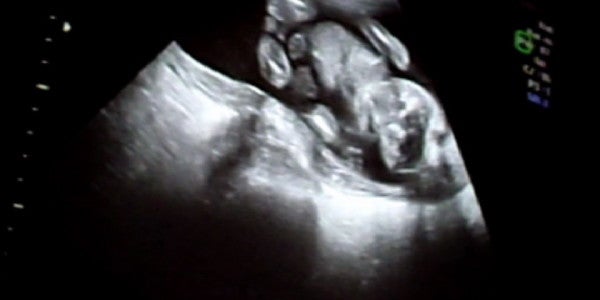 During a routine sonogram appointment on Sept 12., an unborn baby floating in its mother’s womb appeared to render a tiny salute to his (or her) parents, Meghan Merriott and Robert Cooper, a former Marine.

The baby is 12-weeks-old — so young that it has neither a name nor a discernible gender. But a fierce sense of red-blooded American patriotism and a profound respect for his or her father’s honorable service to our country? Well, it appears so.

“While they were doing the sonogram the baby was actually sleeping on its side and they tried several times to get him/her to wake up to take the picture that they needed to take,” Merriott told the ABC News affiliate in her native Columbus, Georgia. “The baby didn’t want to wake up, then threw hand in the air and then threw it back down.”

As far as we’re concerned, that’s a salute, and the Merriott-Cooper family seems to agree. Merriot told ABC News that a photo of “the salute” will be hung on the wall of its paternal grandmother’s house in honor of its father and grandfather, who, not surprisingly, also served in the military.