“This is exactly what we would be doing in a combat environment.” 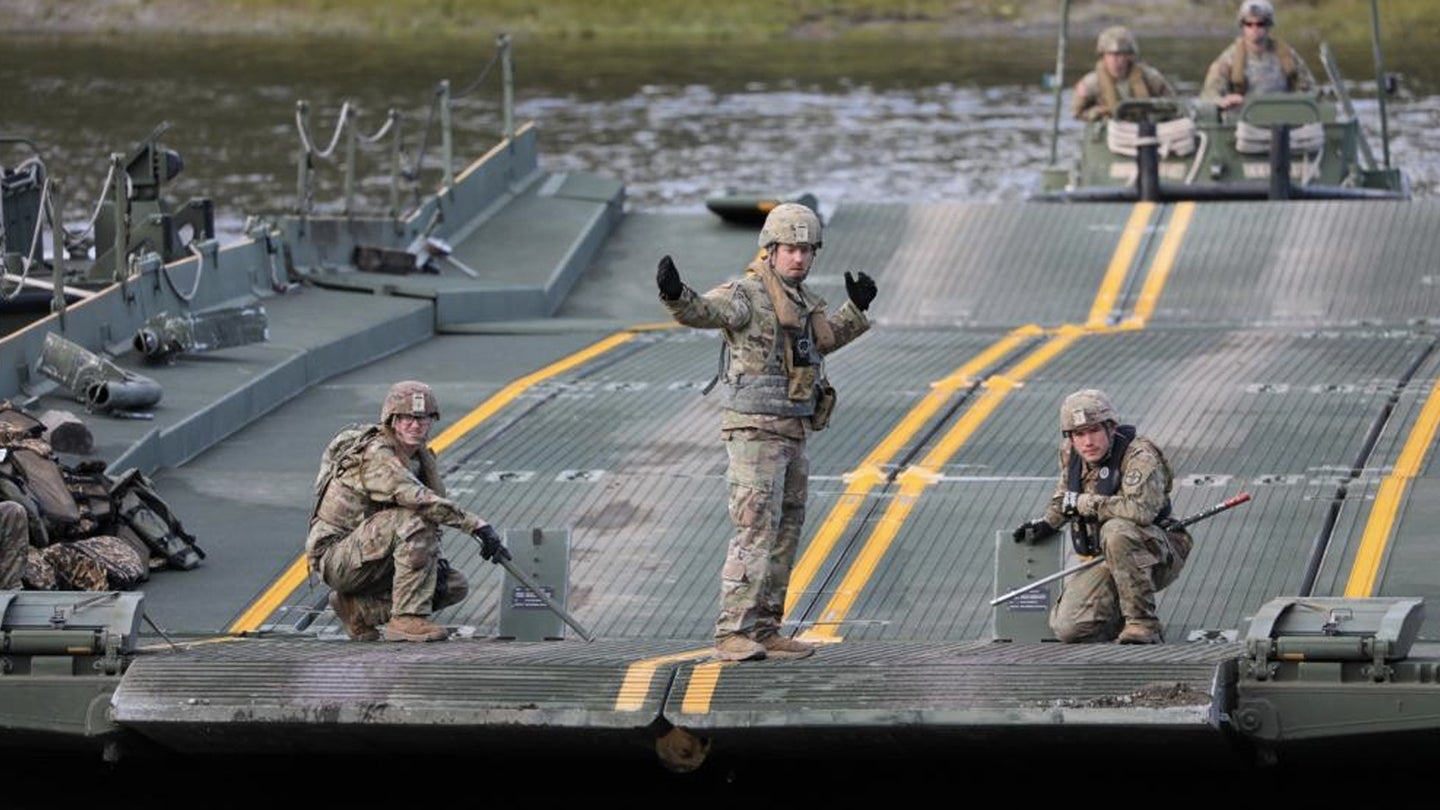 In early May, the Russian military tried again and again to cross the Siverskyi Donets River in eastern Ukraine as part of an effort to encircle Ukrainian troops fighting in the Donbas region. But instead of being a decisive maneuver, the river crossing was a complete disaster for the Russian army, with some observers estimating that the invaders lost up to 73 tanks, armored vehicles, amphibious vehicles and other equipment — enough to fill an entire battalion tactical group.

“[A] river crossing is one of the most complicated maneuvers,” retired U.S. Army Brig. Gen. Peter DeLuca, a veteran of the U.S. Army Corps of Engineers who has studied the Russian military, told the Wall Street Journal at the time. “It all has to be coordinated to be effective, and we haven’t seen the Russians do that at all in Ukraine.”

The difficulty of a water crossing is why U.S. Army bridge crewmembers, divers and U.S. Marines spent a day practicing the task earlier this week at Joint Base Lewis-McChord Washington. Unlike the Russian attempt at Siverskyi Donets, this one went great: the team managed to deploy a bridge across a 360-foot lake, which is longer than a football field, in 12 minutes and 54 seconds, beating their goal of 13 minutes.

“We killed it,” said Spc. Chile Ferguson, a bridge crewmember with the 671st Multi-Role Bridge Company.

There are a lot of steps involved in a “wet gap crossing,” the Army term for crossing a water obstacle. One Army document says that the task generally includes preparing routes to and from the crossing point, completing a hydrographic survey to detect underwater obstacles, then deploying the equipment to cross the obstacle. Like many other complex military operations, planning is key to success.

Extensive planning may have been an element missing from the Russians’ strategy to cross the Siverskyi Donets. Tony Spamer, a retired British Regimental Sergeant Major who served as a commando engineer, told the Wall Street Journal that his units practiced bridge crossings up to seven times at slow speed on their base in Afghanistan before practicing again at speed, trying to cut down precious minutes in training so it would not take so long under fire.

“We’d have never rolled up to a site and tried to give it a go,” like the Russians may have done, Spamer told the Wall Street Journal.

It’s not clear how much time the soldiers and Marines in Washington spent preparing for their bridge build, but the press release said the entire Courage Crossing 22 exercise took two weeks. It was many of the service members’ first time working together, but what they lacked in experience side-by-side they made up for in overall know-how.

“From day one meeting, we all just clicked,” said Sgt. Robert Duggan, of the 132nd Multi-Role Bridge Company out of Redding, California, in the press release. “There was a lot of knowledge spread back and forth. This was the first time I did a complete enclosure. It was smooth.”

The Army has several different methods of building a bridge over water. There is the M104 Heavy Assault Bridge, which is an M1 Abrams tank but the top half is a metal bridge that folds out over an obstacle. There is also the dry support bridge, which is made out of several interlocking metal sections suspended in the air. There is also the improved ribbon bridge, where engineers drop floating sections of bridge into a body of water and then connect them across the obstacle. The exact type of bridge used in Washington is unclear, but the photos and text show soldiers piecing together floating sections of it. It sounds easy, but it’s a tough business.

“There was a learning curve, but I really got to step into that roll and control my own raft, including the range of responsibilities that come with that,” said Cpl. Kyle Wells, a squad leader and raft commander. “We spanned the entire gap across the lake, which is something we haven’t done in a while, and it was really an awesome thing to see.”

All that planning and preparation paid off, because the bridging units completed their task in a mere 12 minutes, 54 seconds. However, what makes a bridge successful is not only its completion but also the traffic management leading up to and coming off it. One Army field manual for gap crossing operations includes entire matrices for how to properly time and organize moving an assault force across a bridge. Not having traffic jams is essential, because any hold-up on the bridge will leave the troops on it completely exposed to enemy fire.

“It’s like trying to run the New York Thanksgiving Day parade with people coming from all different directions, down one narrow space and dispersing again, all without traffic jams,” as DeLuca told the Wall Street Journal.

That momentum needs to continue to the other side of the bridge so that the assault force can clear the far bank and make room for follow-on forces.

“Commanders need a clear plan for what happens after the crossing,” retired Australian Army Maj. Gen. Mick Ryan told the Wall Street Journal. “It isn’t about sitting around drinking tea thinking, ‘Good job on that crossing’”

Proper traffic control may have been another area neglected by the Russian military in Siverskyi Donets: aerial and satellite photos show destroyed armored vehicles crowded onto the banks of the river, and two Russian bridges may have been very close to each other, where they could both be damaged at the same time by artillery shells, the Wall Street Journal reported.

“It doesn’t seem the engineers were being looked after at all,” Spamer said in the article.

The American soldiers operating in Washington had a distinct advantage over the Russians: they did not have to build a bridge while being shot at. But as one soldier put it, practice makes perfect.

“It is important to train and be practiced in this mission because large-scale combat operations in potential theaters of combat will require wet gap crossings,” said Col. Kenneth Shubert, commander of the 926th Engineer Brigade, after his unit conducted a similar exercise in Georgia last August.

With that in mind, the service members at Courage Crossing 22 did a pretty bang-up job.

And according to Sgt. Alexander Ditch, a build crew manager and raft commander who helped the 671st build their bridge this week, the practice inspires confidence: “This is exactly what we would be doing in a combat environment.”

“We have seen how other entities do this wrong,” said 321st Engineering Battalion commander Lt. Col. Guy Thornton in the press release about Courage Crossing 22. “This event was an opportunity to show ourselves, show our nation and show the world how to do it right – and that’s exactly what we did!”