If I had the answers to all these questions and a crystal ball, I might have been able to make an accurate SBP selection. 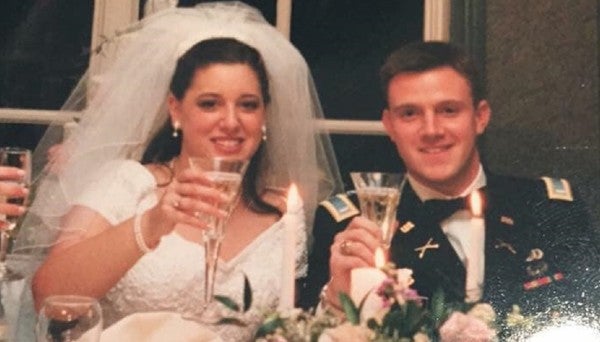 Editor's note: Traci J. Voelke is the surviving spouse of U.S. Army Maj. Paul C. Voelke, who was killed in Mazar-i-Sharif, Afghanistan in 2012 during his fifth deployment overseas. A mother of two, she is currently an attorney for the Office of the Staff Judge Advocate at Fort Belvoir, Virginia, where she serves as legal counsel for service members and their families, veterans, retirees, and Gold Star families.

I will never forget that day.

It was June 22, 2012, and I was getting ready to take my two boys, then ages 6 and 8, to a baseball game with my brother-in-law. The doorbell rang, then rang again a few more times, and I began to get a bit agitated as I thought my boys were taunting me to hurry up. We never made it to that game.

When I opened the door, two men in full military uniform stood in my doorway — a vision that will be etched in my memory for eternity. My husband, my high school sweetheart, my Paul, would not be returning from his fifth deployment overseas in Afghanistan.

The weeks that ensued naturally were filled with overwhelming sadness, confusion, and uncertainty.

I barely remember those first few months. Even to this day, friends will remind me of something that happened shortly after Paul was killed and it is as if time stopped when those soldiers came to my doorstep with the fateful news. I suppose that is to be expected after the loss of a spouse.

As a trained military family readiness group leader, 12-year military spouse and licensed attorney, what I didn't expect was the litany of documentation and literal mounds of paperwork that followed.

When Paul was killed, I was fortunate to have a close circle of resourceful friends and family helping me who essentially served as my personal secretaries. While I was still numb with depression and unable to process the life-changing decisions that I was being forced to make immediately following my husband's death, they helped me figure out the daunting maze of benefits and explained them to me.

They helped cart me around from office to office and helped streamline the process for me so I could make the most informed decisions possible, even as they had trouble understanding it all themselves.

The most significant piece of paperwork — which I doubt I really even understood how important it was at the time — was selecting whether to transfer my husband's Survivor Benefit Plan (SBP) benefits to my children in order to avoid what is commonly known as the “Widow's Tax” or the Survivor Benefit Plan/Dependency and Indemnity Compensation offset.

The Survivor Benefit Plan, which pays 55 percent of the pension benefits our deceased spouses would have received if they retired at the rank they died, is offset from the Dependency and Indemnity Compensation (DIC), a fixed amount paid to military survivors by the Department of Veterans Affairs to hold the government harmless for the death of a spouse.

Due to an archaic rule, the money paid by the VA must offset the SBP pension benefits paid by the DoD. If you happen to be confused at this point, can you imagine trying to understand this just moments after the death of your spouse, while submerged in the grief of your loss?

Complex charts with numbers jumping off the page, lawyers, accountants, financial planners, amortization charts, but all you really have the mental energy for is making sure you feed your children breakfast that day. The catch is that the benefits cannot begin until the selection is made and the selection is irrevocable.

Traci Voelke and her sons, AJ and Benjamin.Photo courtesy of Tragedy Assistance Program for Survivors

I had been an attorney for 10 years when my husband passed. I had practiced law at four different jobs and I was licensed to practice in three separate states. However, I wasn't working when my husband was killed, as I had decided to take a break when he was deployed this time.

As a military spouse, we are encouraged to try to piecemeal a career together, which we must continually reset every one to three years. I did just that — taking multiple bar exams, knocking down doors and sending out resumes in remote towns by military posts in search of work. All that time, however, I wasn't able to vest in my own pension, as every time I had the opportunity or was eligible for a promotion, the Army would move us again. Now, after the death of my husband, would I go back to work? Would I remarry? What was my earning potential? Where would I move?

If I had the answers to all these questions and a crystal ball, I might have been able to make an accurate SBP selection.

After speaking with many survivors in the seven years since Paul died, I realized that most widows do not have the type of competent advice that I had when making the offset decision. Many didn't understand that their selection was unchangeable and many had no choice but to transfer the benefits to their children in order to pay their bills.

In fact, many surviving spouses hadn't managed their family's income before. Electing the SBP child option meant the slight 55 percent of their spouse's pension benefits would completely end after their children turned 22, leaving them with none of those benefits. Elimination of the SBP-DIC offset or “Widow's Tax” would eradicate this choice and provide survivors a bit more, although not total, financial security.

For the widow of a retiree, their spouse elected the SBP benefits upon retirement and paid 6.5 percent of his or her retiree paycheck each month toward the insurance plan. If the retiree dies of a service-connected illness, their survivors are also subject to the offset.

The fact that their spouse cannot receive the insurance annuity they paid into is nothing short of criminal.

I have vowed not to rest until this problem is corrected. The spring after my husband died, I headed to D.C. and walked the halls of Congress with Military Officers Association of America urging congressional members to consider this inequity. It is mentally and physically exhausting, telling your story over and over, but I am committed to telling my story as many times as needed to resolve this issue, despite the personal pain and stress it may cause me.

Over and over again, I have met with members of Congress and told them, in short, “my husband died, here is my story, and this is why you should pay these benefits to survivors — benefits that our husbands earned and paid the ultimate sacrifice for.” I only have the privilege of urging Congress to pay survivors what they are owed because there were men and women like my husband brave enough to risk their lives to protect our First Amendment rights.

To date, as I write this, there are 365 members of the House and 75 members of the Senate cosponsoring legislation to eliminate the SBP-DIC offset. However, it has been frustrating to watch some members of Congress, like my own Sen. Tim Kaine, who ran his election campaign on supporting military families, neglect to cosponsor despite overwhelming bipartisan support.

I have thought deeply about why this is, and I am reminded that the person who would have advocated for us is our deceased spouse. Perhaps Congress would have listened to the person in uniform.

I must mention that I am extremely grateful to military and veterans service organizations such as the Tragedy Assistance Program for Survivors, Veterans of Foreign Wars, National Military Family Association and Military Officers Association of America who are willing to be our advocates and fight for us. They continue to do so, despite the recent roadblock effectuated by the Senate.

As we think about Independence Day this week, the cliché rings true. Freedom isn't free. This unfair offset is a cost of war and we owe our nation's surviving military families the financial security that their spouses died to protect.