This is just too cool. 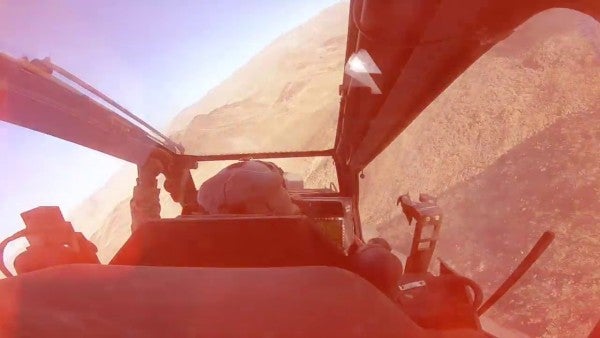 If you had asked me a month ago if I was a particular fan of helicopters, I would have rolled my eyes. But that was before I saw this cool-as-hell send-off video for the 4-6 Heavy Attack Reconnaissance Squadron Apache unit.

The 4th Attack Reconnaissance Squadron, 6th Cavalry Regiment, 16th Combat Aviation Brigade deployed to South Korea for nine months at the beginning of this year, and to cap off a year of training, Army Chief Warrant Officer 2 Andrew Koskela thought he’d do something a little different for their annual end-of-year Winter Ball.

“I wanted to bring to life all the stories we tell our families and friends,” Koskela told Task & Purpose in a phone interview. “It’s not often that people get to see what we do from our perspective. A video honestly just showed them the most realistic take on our day-to-day life.”

Not to mention it just looks badass.

Koskela was asked to make a PowerPoint presentation for last year’s Winter Ball, which he described as “so lame.” So he instead worked throughout 2018 on filming and editing a new project.

Nothing spices up an end-of-year presentation like video footage from the cockpit of an Apache helicopter and clips of training exercises, flying just feet off the ground.

Making the video was exciting for the whole team, not just the pilots, Koskela said. And it was even more exciting to show their family and friends at the end of the year.

“Their families were there watching it which, I mean I think boosted everybody’s morale big time,” Koskela said. “Getting to bring their families in, like ‘This is what I do,’ and show their families that they’re a part of something bigger.”

Koskela has been flying a little over two years, he said, though he originally started his Army career in the medical field at Walter Reed Hospital. While he knew he wanted to fly, his change in path was solidified after talking with wounded soldiers, and hearing their admiration for the Apache units.

“Hearing them, literally coming to tears, saying ‘Man, the second Apache’s would get overhead I knew that everything was going to be okay…’ I want to be the guy that prevents my brothers from getting shot, you know? … I was sold at that point, there was no stopping me.”

Godspeed, 4-6 HARS. And if you ever want to take a reporter up on a ride when you get back to the states…give me a call.

SEE ALSO: Confessions Of An Apache Pilot: What It’s Like To Fly The Military’s Most Heavily Armed Attack Helicopter