"What I held as the unfathomable moral bedrock of the U.S. military — condoning the worst actors on the battlefield — has now become an acceptable reality" 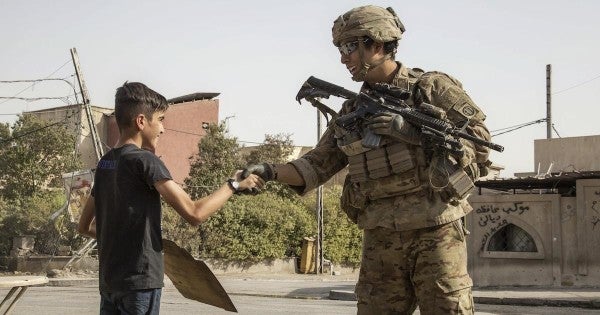 Editor’s note: This is an op-ed.

My cell phone rang on a sweltering Baghdad summer night in 2006. My best friend and West Point classmate, Maj. Bill Taylor was on the other end.

“It’s bad,” he said. “We need to get these guys to an American military hospital, ASAP.”

“These guys” were captured suspected al-Qaeda insurgents, and Bill, one lone American soldier, was now the only thing standing between them and several hundred Iraqi soldiers bent on tearing them apart.

Bill and I were advisors to a newly-formed Iraqi Army unit that had been suddenly deployed to conduct security operations in the most violent neighborhoods in Baghdad. Our Iraqi partner unit was made up of mixed sects but, like the country, was mostly Shia. Together we patrolled two ethnically-cleansed neighborhoods, now in open warfare with each other: the Sunni enclave of Adamyia and infamous Shia-dominated Sadr City.

Once our Iraqi unit and its handful of American advisors deployed to Baghdad, we were tested daily. Snipers, IEDs and car bombs took a bloody toll on our partners. Soon, an attack would claim the life of a popular Shia sergeant in our partner Iraqi brigade.

On the night that Bill called me, three suspected Sunni insurgents were detained and brought to the camp we shared with our Iraqi partners. Iraqi officers followed all the appropriate procedures, but once the suspected insurgents got on the base, a few dozen Shia soldiers mobbed them. The enraged soldiers beat the detainees to within inches of their lives until an Iraqi sergeant called for help from his American advisors.

Bill grabbed a hat, cell phone, and, wearing the pistol he always carried, ran towards the escalating situation with his interpreter. As Bill worked his way across the camp, I ran to our small advisor command post and secured an ambulance and two Iraqi medics to get the detainees to the hospital on the nearby American base.

When he called me, Bill was standing with his Iraqi interpreter over three bloodied detainees in the Iraqi unit’s headquarters building. I told him the ambulance and our U.S. advisor escort was ready in a nearby motor pool. By now hundreds of infuriated Iraqi soldiers had formed outside the headquarters building, demanding the detainees. It was a lynch mob.

Bill and I understood that the only way to the ambulance, and medical treatment, was through them.

At West Point, the study of morality in warfare is ever present. Over four years of study, cadets are steeped in military history, ethics, philosophy, and military law. We studied Just War Theory, the Geneva Conventions, and the Law of Armed Conflict. When it came to captured enemies, one constant of our military education — from medieval chivalry to the modern battlefield — was that we Americans were supposed to be the good guys. We protect civilians and detainees; those who harm the defenseless, from civilians to unarmed prisoners, are the worst actors on the battlefield.

Our own Army’s history was founded on these principles. Our first commander, Gen. George Washington, enshrined these principles even as British and Hessian troops mistreated their American captives. We studied the atrocious treatment of Union troops at the infamous Andersonville prison in Georgia. We learned of our Army’s role in creating and running the Nuremberg Trials. I can still recall meeting a survivor of the Bataan Death March while a cadet visiting a local VA hospice; nearly 50 years later, flashbacks to his brutal experience at the hands of the Japanese Army rendered him catatonic. That would be my first insight into severe Post Traumatic Stress Disorder.

The proximity of the Vietnam War made this subject even more real for us. Our own professors fought some of the battles we studied. Several former Hanoi Hilton prisoners of war would come through West Point to talk to cadets. Many of us wore POW/MIA bracelets, and we all observed the political careers of former tortured prisoners Adm. John Stockdale and Sen. John McCain (R-Ariz.).

These ideas are not unique to West Point or U.S. military professionals. They are ideas enshrined in our American pop culture. Hollywood has always reinforced these concepts, from the dark humor of Hogan’s Heroes to movies like Red Dawn, the Bridge on the River Kwai, Uncommon Valor, Missing in Action, Rambo II, and The Great Escape: It was the bad guys who mistreated prisoners while sneering at the Geneva Conventions, not the American military.

It is in this context, through this lens, that I watch the ongoing reaction over the recent pardons of U.S. service members accused (and two convicted) of committing war crimes and other atrocities while deployed overseas. Those atrocities include ordering their troops to open fire on Afghan civilians, vengefully executing a suspected Taliban bomb-maker, and posing with a dead ISIS fighter.

What I held as the unfathomable moral bedrock of the U.S. military — condoning the worst actors on the battlefield — has now become an acceptable reality.

Military leaders of my generation know war is not black and white. We saw firsthand the challenges of counterinsurgency, shifting rules of engagement, and a vague political strategy. I know how difficult and frustrating this is. I personally refused to let SEALs in my command drop a bomb on a house when they could not confirm that there weren’t any civilians inside. I had to look at them in the eye and explain my decision. I have supervised detainees and personally stopped my own Iraqi and Afghan partners from abusing them, even at the cost of my relationship with them.

But we all know that those entrusted with the capacity to unleash great violence must also be held to the highest standards of ethics and discipline. I know what it’s like to be enraged and full of adrenaline after losing my own soldiers. You want to beat the hell out of those you just fought.

But you don’t. And you don’t let your subordinates do it. Because this is what we do. Americans are supposed to be the good guys, and when we are not, like the infamous Lt. William Calley at My Lai, we hold them accountable.

I saw what this national and institutional accountability meant when I commanded a Battalion Task Force in Afghanistan in 2012, when the news broke that Army Staff Sgt. Robert Bales had murdered 16 Afghan civilians in cold blood. In a time of significant “green on blue” attacks, where insurgent sympathizers inside Afghan security units were murdering U.S. troops, we feared violent reprisals and a massive security repercussions.

But the reprisals never came. Commanders across the country immediately began key leader engagements with their Afghan counterparts and local tribal leaders, and we learned quickly that our Afghan partners trusted our American values, institutions and accountability; they believed and communicated back to us that this event was a one off, and we, the American military, would hold Bales accountable.

In the most remote villages on the globe, people watch and hear US news. What is happening inside the United States, including domestic politics, is transmitted to them in real time. The people in conflict areas where I operated look for hope, while our adversaries look for examples of hypocrisy to drive a wedge between those aspiring for a better life and our own national security goals.

Statistically, after 18 years of war and millions of troops carrying out challenging operations in Afghanistan, Iraq, Syria, and Africa, our record is pretty damned good. Our front line leaders, especially our junior officers and sergeants, have held the line. They controlled chaos and violence, and upheld the rules of war, often at the risk and even loss of friendly lives, because that is who we are. That is who George Washington enshrined in our professional warrior ethos in 1776. We don’t have a perfect record, but the arch of history, from establishing the Nuremberg trials to chasing Bosnian war criminals, has always bent towards building that trust: America does the right thing.

A mentor once told me that trust takes years, and even lifetimes to build, but it can vanish in an instant — and you never really get it back.

The decision to pardon American war criminals will impact that trust, and will have long-lasting consequences on the battlefield. While it is within the president’s power, his breach of the military justice system — overturning the verdicts of military service members — will likely breed uncertainty among the U.S. military and its partners about whether we are still the good guys.

When the Iraqis called us in 2006, they trusted us, and believed Americans would do the right thing. They knew someone would run to help. Although Bill was only armed with a pistol, he would risk his life, placing himself between three suspected insurgents and an angry mob.

That night, Bill faced down hundreds of angry Iraqi soldiers, ensuring the detainees were loaded in the back of a truck before riding with them to an American military hospital. He did so because he was an officer in the United States Army, commissioned and entrusted to uphold our American values. Bill knew this was about something larger, that if he didn’t act, the Iraqis wouldn’t call us again.

He knew he needed to act, to ensure Iraqis would not watch the dimming of the American moral beacon.

A West Point graduate, Mike Jason retired this summer as a U.S. Army Colonel after 24 years on active duty. He commanded combat units in Germany, Kosovo, Kuwait, Iraq and Afghanistan.