As A Veteran, Here’s How I Feel Watching Continued Fighting In Afghanistan

Last year, thousands of Iraq combat veterans watched the country they'd fought in fall to ISIS. Days ago, a dusty... 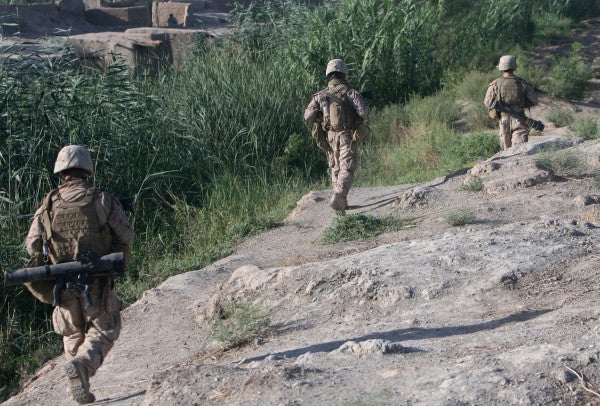 Last year, thousands of Iraq combat veterans watched the country they'd fought in fall to ISIS. Days ago, a dusty city named Marjah made headlines after a Special Forces soldier was killed there. The same dusty goat trails and wadis I walked through for two years scrolled up the screen as I read of yet another American killed in a city American contractors built in the 1950s.

When I was in Marjah, a running gag in the platoon was the saying, “Well, at least we're not in Iraq.” We were “surge babies,” part of the tens of thousands of Americans who'd enlisted after Obama's troop surge. We'd been trained by men who'd fought in Iraq since 2003, men who'd intimately known places like Fallujah, al Asad, Ramadi, and Baghdad. For us, these were hallowed grounds, ones we were bred by the Corps to give a religious amount of respect. The Marines who'd fought there were heroes to us. No matter how brutal Marjah got, it was not the door-to-door bloodbath of Fallujah, not the vicious slug-out that was Ramadi. It was both a self-admonishing check on our hubris, ensuring that we did not get to full of ourselves in the beauty of our death dealing, and a quick moment of respect to those that had made us the Marines we were.

Related: For those who fought in Marjah, it was more than just a battle.

As ISIS surged across Iraq last year, I remember sitting on a couch in Manhattan wondering what it must be like for all the Fallujah veterans who were watching their old battleground be overrun by the modern version of their former enemy. I felt grateful that my city was, as far as I knew, still in the hands of the good guys. I desperately clung to the last shred of my “good war” mentality. I told myself that Marjah would be different. It was a long shot, yes, but somehow the Afghan army we left behind would hold. The local police we'd armed and joked with on patrol would find it within themselves to hold strong against the Taliban. I didn't know if I could handle seeing what I'd spent four years doing be shown on live TV as having been for nothing.

ISIS is not in Marjah. The Taliban is. Because it is the Taliban and not ISIS, Marjah (and the rest of Helmand) will most likely not stay on the news. The Taliban aren't flashy enough to warrant obsessing over during cable news coverage. After 15 years, American media has given up on trying to make Afghanistan sexy. ISIS puts way more production value into its work anyways, and this pays off in the media. So I won't have to watch a truck full of Taliban rolling down Route Gorilla, past the compound I spent eight months in on CNN. I won't see men in suits yell at each other on TV over how to stop the Taliban. I won't watch the Afghan army be ridiculed for cowardice by TV pundits who've never shoved their head in a ditch while bullets sing to them. I won't have to hear 20-somethings in the Upper West Side widen their eyes and gasp at each other about how horrific the latest Taliban killing video was, but ohmygosh, it looked just like a movie.

But I did pull out the map I brought back from Helmand and traced the route that Special Forces soldiers would have had to drive down to rescue their friends last week. I did watch the last 30 minutes of a documentary about the Afghan army in Helmand. I did stare blankly at a friend over a cigarette and coffee, and while he talked, I thought only of Marjah.

At least it wasn't Iraq.