Navy pilots are reporting more UFOs. Are they from Russia, China, or somewhere beyond?

"I'd be very surprised if these were Russian or Chinese aircraft operating from Russia or China." 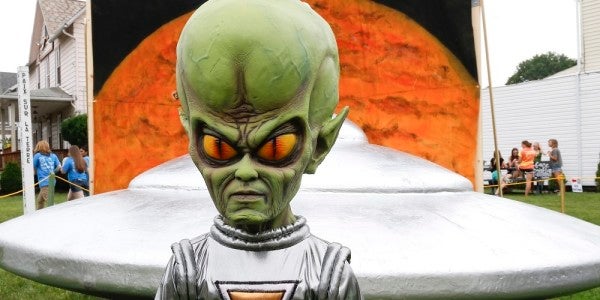 To be clear, your friend and humble narrator does not wear a tinfoil hat, nor does this reporter believe the U.S. government is competent enough to keep proof of alien life secret from the American public. (Just remember, the same government that conspiracy theorists allege is keeping the truth about UFOs under wraps also runs the Defense Finance and Accounting Service.)

Yet a number of credible media outlets have reported that Navy pilots are increasingly reporting sightings of unidentified aircraft, and the service is taking them seriously for a change. Politico's Bryan Bender reported in April that the Navy was working on new guidelines for reporting such aircraft in the wake of increased sightings in military ranges and airspace.

Helene Cooper of the New York Times recently reported that Navy pilots saw a slew of unidentified aircraft in 2014 and 2015 while flying training missions off the East Coast. In fact, a pilot from Virginia Beach nearly collided with one of the unknown aircraft in late 2014.

The strange aircraft had no visible engine or infrared exhaust plumes, the New York Times reported. They could fly up to 30,000 feet and they were able to loiter in the area of U.S. warships for 12 hours at high speeds.

The Navy declined to speculate who or what may be flying the mysterious aircraft.

“I would note; however, that, consistent with the wide proliferation and availability of inexpensive unmanned aerial systems sightings of this nature have increased in frequency from 2014 until now,” said Joseph Gradisher, a spokesman for the deputy chief of naval operations for information warfare.

But could these strange aircraft actually be long-range Russian or Chinese unmanned surveillance aircraft?

Probably not, according to the Air Force.

“While there is a proliferation of UAV technology across the globe, we are not concerned that China or Russia have developed a long-range capability about which we are not aware,” said Air Force spokesman Maj. Bryan Lewis.

Any drone that could fly from Russia or China to the United States' East Coast would have to be at least as large as an MQ-9 Reaper and the data link used to fly the aircraft would be detectable, said retired Air Force Maj. Gen. James Poss, who served as the service's former assistant deputy chief of staff for intelligence, surveillance, and reconnaissance.

“I'd be very surprised if these were Russian or Chinese aircraft operating from Russia or China,” Poss told Task & Purpose.

With conventional theories Tango Uniform, your humble Pentagon correspondent went full History Channel and asked defense officials if they had any concerns that extraterrestrials were spying on the U.S. military. (It is important to set the right tone when asking the military about UFOs, so this reporter attempted to be as nonchalant as Russian sailors letting it all hang out.)

For the most part, officials responded with polite silence – and in one case, a very long glare.

From 2008 until 2012, the Defense Intelligence Agency investigated unidentified aircraft as part of the Advanced Aerospace Threat Identification Program, which has been described in the media as the Pentagon's X-Files.

The program was meant to determine if unexplained sightings showed evidence of advanced enemy technology. It produced 38 reports, but a review in late 2009 found the data were of not much value to the DIA, so the program ended, defense officials said.

The military has since moved on to more pressing concerns such as standing up Space Force – which defense officials insist will not be our first line of defense when the Bug War starts.

“Why not?” Reid told Task & Purpose. “I think it's foolhardy to do nothing.”

Reid secured most of the funding for the now defunct DIA program that investigated unexplained aircraft sightings. He said he is unsure if the type of unknown aircraft mentioned in the New York Times are extraterrestrial.

“We don't have a lot explanation for what they are,” he said. “They can go vertically, horizontally at huge air knots. If you have a jet airplane that goes 700 miles an hour – we've only got one going that fast – these things it's estimated are going 3,000 miles per hour. So try that one on.”