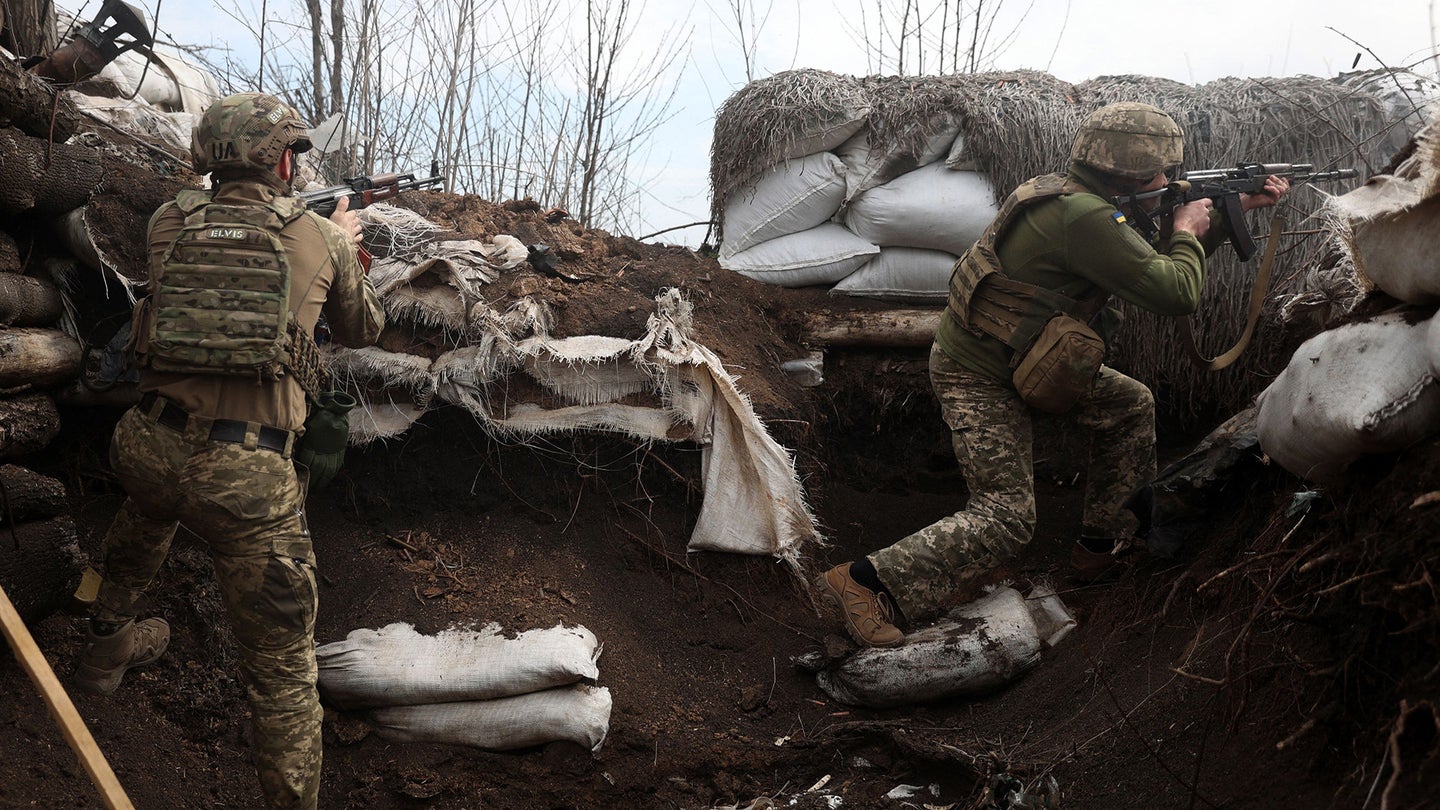 Ukrainian soldiers keep their position in a trench on the front line with Russian troops in Lugansk region on April 11, 2022. (Anatolii Stepanov/AFP via Getty Images).
SHARE

Nearly seven weeks after launching its full-scale attack on Ukraine, the Russians are regrouping for a new offensive in the hopes of regaining the initiative.

Russia’s attempts to capture the capital city of Kyiv have failed, for now. Ukrainian troops have decimated Russian special operations and conventional forces on the Kyiv front. Russia is now expected to concentrate its forces in the Donets Basin region of Ukraine, known as the Donbas, to encircle Ukrainian forces that have been fighting separatists in the eastern part of the country.

Commercially available satellite images on Friday showed a Russian military convoy that stretched for eight miles headed to the eastern Ukrainian city of Izium. The convoy is made up of hundreds of armored vehicles and trucks.

Yet it’s important to note that the problems that have sapped the Russian military’s effectiveness so far have not gone away, said Khrystyna Holynska, a defense and security policy researcher at the RAND Corporation, a non-profit research organization.

“While it is expected that Russian forces will regroup and restart their offensive, it is very important to remember that this is still the same Russian military with low morale, distrust in the ranks, weapons systems and logistics problems, and many other issues that have been widely discussed,” Holynska told Task & Purpose. “These problems cannot be solved quickly. Building the airplane in flight is likely not a task Russia is able to fulfill successfully in the coming weeks or months.”

One issue the Russians have sought to address is clarifying the chain of command by appointing one overall commander for the invasion: Gen. Alexander Dvornikov. Since 2016, Dvornikov has led Russia’s Southern Military District, which has purview over Ukraine’s Donbas region, the focus of Russia’s impending offensive, tweeted former Marine Capt. Rob Lee, who spent a year with a defense-focused think tank in Moscow

Much like the fighting on the Eastern Front during World War II, the conflict in Ukraine has become a war without pity. When the Ukrainians liberated the suburb of Bucha, the world was aghast to discover that Russian forces had killed scores of civilians. Ukrainian President Volodymyr Zelensky said on April 7 that the situation in the town of Borodyanka, roughly 37 miles northwest of Kyiv, is “significantly more dreadful” than in Bucha, according to Reuters.

“Earlier, Ukraine’s prosecutor general, Iryna Venediktova, said in the Kyiv region, which includes Borodyanka, Bucha and other towns and villages such as Irpin, the authorities had found ‘650 dead bodies, from them it is 40 dead bodies only kids,’” Reuters reported.

Germany has reportedly also intercepted radio communications in which Russian soldiers discussed killing Ukrainian troops and civilians at random, according to the German magazine Der Spiegel.

Evidence has also emerged indicating that Ukrainian forces may also be violating the laws of armed conflict A video posted on Telegram shows a Ukrainian soldier executing a wounded Russian soldier following an ambush.

Since Russia began its attack in late February, Ukraine has dominated the information war, and Russian President Vladmir Putin’s supporters have been playing defense.

It is becoming harder for the Kremlin to spin the war in Ukraine as a success. The Russian government initially downplayed the number of casualties that its forces were taking, but on April 7 Kremlin spokesman Dmitry Peskov acknowledged that Russia has suffered “significant losses of troops.”

It is not clear how many Russian troops have died in Ukraine so far. Russia’s defense ministry has claimed that 1,351 of its troops have been killed. An unnamed NATO official told reporters that between 7,000 and 15,000 Russians may have died during the invasion, but Task & Purpose has learned that U.S. officials do not believe Russian losses are that high. (It has been equally challenging finding reliable information about Ukrainian casualties.)

On April 8, Russia’s foreign ministry spokeswoman Maria Zakharova made a bizarre claim at a news conference, when she told reporters that the Ukrainians had refused to share their recipe for borscht, adding: “The xenophobia, the fascism, the extremism.”

It’s clear that Russia’s decision to move its troops away from Kyiv has had a profound effect on both sides of the conflict, Holynska said.

“Russians started to admit more losses and changed their rhetoric to justify their focus on Donbas,” Holynska said. “This is drastically different from the early days when the narrative revolved around the need for a ‘de-nazified’ government for the country as a whole. For Ukraine, it is a major boost to morale. Keeping control of Kyiv was one of the main defense objectives, and it has been successfully achieved so far. The images of people cleaning up the streets of Bucha and Irpin give hope for normalcy even if it remains distant.”

Indeed, British Prime Minister Boris Johnson made a surprise visit to Kyiv over the weekend and a video posted on social media showed Johnson and Zelensky touring the city on April 8.

Meanwhile, military assistance from the United States and other NATO allies continues to pour into Ukraine. Slovakia has provided Ukraine with an S-300 air defense system; the Czech Republic has sent T-72 tanks and fighting vehicles; and the U.S. military has given the Ukrainians more than 5,000 Javelin anti-armor weapons, more than 1,400 Stinger shoulder-fired surface-to-air missiles, and “hundreds” of Switchblade suicide drones, according to the Defense Department.

Russia’s defense ministry claimed on Monday that its forces had destroyed the S-300 air defense system that Slovakia had sent to Ukraine, but a senior defense official told reporters that was not true.

Despite all this assistance, the situation in southern and eastern Ukraine remains precarious for the defenders. The city of Mariupol has been under siege for weeks. Like Leningrad during World War II, the city faces both starvation as well as enemy troops.

On April 8, a Russian missile attack on a train station in the eastern Ukrainian city of Kramatorsk killed 50 people, including children. The civilians were trying to travel to a safer part of Ukraine after local authorities told them to leave ahead of Russia’s expected offensive.

Ukrainians’ outrage over the killings of civilians at Bucha, Borodyanka, and Kramatorsk will make it harder for the Ukrainian government to agree to any concessions as part of a peace deal with Russia, Holynska said.

“The suffering of the Ukrainian population, with so many dead, so many families torn apart, homes and everyday lives lost, is an important variable to account for in any peace talks,” Holynska said.