“They used this place to shoot the Batman movies,” our shuttle driver replied to the comments about all of the... 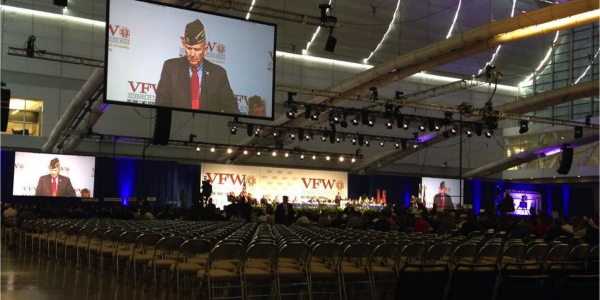 “They used this place to shoot the Batman movies,” our shuttle driver replied to the comments about all of the gothic architecture with strong industrial influence. The aging industrial hub of Pittsburgh has revitalized itself, and was alive with activity, vibrant culture on display in many areas. The man drove fast and hard through the city streets, carrying me and my two comrades to the 116th Veterans of Foreign Wars National Convention at the heart of the cultural center. The juxtaposition of setting and function could not be more striking.

The story of the convention in the mainstream media has been President Barack Obama’s address. While his message was likely not popular with some, the crowd of veterans have more respect for his office than to allow personal political views to embarrass him.

I found the real story of the convention to be a lack of involvement from those who fought most recently. It wasn’t that we were not welcome, as the seats had been placed on the floor for us. A bird’s eye view of the crowd would make you think we had not fought a war in 40 years.

The three of us were sent to collect an award on behalf of our post in Bath, Maine, for outstanding community service. Each of us are veterans of Iraq and/or Afghanistan, and serve as officers, or command the post and district. Our post donated over $32,000 to Mid Coast Maine last year, and countless hours in service through various volunteer programs. We accomplished this through the efforts of roughly 25 active members, five of whom are post-9/11 veterans, with no home or bar, renting space for our meetings and functions.

There are only 50 posts out of the over 6,000 total recognized for this award each year, and most are larger and better supported. Our reception remained small though, and no real time for personal interaction or handshaking with any senior leadership. I was slightly disappointed, but posed for the eastern states group photograph with Commander-in-Chief John Stroud none the less. They got a picture with my service dog, Rocco.

I was pleasantly surprised to see how receptive of service dogs the convention was. I had been nervous of taking him there, as we are still getting used to working together and have not been to a large function like this. Within minutes of checking in, people were offering up directions for his access, and even registering him for the event. This was very welcoming, and he was put at ease quickly.

The hospitality suites were the place to be at night, filled with mingling veterans and cultural displays from each state. Conversations would inevitably steer toward Rocco, or how to recruit younger veterans. I heard countless stories from jaded posts members who find young vets, only to have them disappear when they are asked to get involved in anything. “I am fed up,” one man said. “They keep coming in, drinking a few beers; get help with a claim, and then leave when I ask if they want to get involved in post leadership or activities.”

We went to a briefing on revitalizing and recruiting new members hosted by Colorado’s Post #1 in Denver. Their message was received well by many: “Know your culture,” being the focus of how to deploy more advanced strategies using technology and marketing plans. Denver’s culture won’t work everywhere, but it does well there. The post offers an art gallery, yoga classes, and a vibrant environment that makes it an easy sell to those who gravitate there.

These ideas were met with some trepidation, largely because the Denver group seemed to thumb their noses at honored traditions and cultural sensitivities of older generations or locations. The group admitted to calling the VFW hats silly, but it remains a symbol to many of the older members, and thus alienated their points of view. Eligible millennials forgo membership because they are required to stand up and sit down too many times, or there’s too much ceremony involved.

In my opinion, the product Denver was selling was forward-thinking, but they got overzealous and forgot to package it the right way. Change comes slowly, and knowing the culture of the national organization is critical when selling your goods. Removing parts of the ritual to make it more time effective for the younger generation will obviously make some angry.

I found myself wondering what justification anyone in our generation really had. The VFW is a fraternal organization created to serve other veterans and the community, not just the individual. Is the formality of ritual once a month really too burdensome? Are we that important or self-involved? Certainly we each have busy lives, but that does not relieve us of our duty toward obligations. When you look to volunteer, do you demand everything in that organization conforms to your will? If yes, you probably are not much of a philanthropist and really are just looking for excuses, as rituals and traditions are the hallmarks of the industry.

We sat in the half-filled room during the business session. I thought of the lack of Iraq and Afghanistan veterans presence in the organization. A vigorous debate was taking place over disbanding the ladies’ and men’s auxiliaries, and making just one auxiliary under our national bylaws. I shook my head and thought of how overdue this action was, and how much time we were wasting. The other items mattered more, but this needed to be done.

An Afghanistan veteran spoke in favor of the change, telling a story of the equality we all know on the battlefield. His voice cracked as he described the performance of his female gunners, and how their families should have the same access to the auxiliaries of our organization.

One man spoke against citing procedure, and attempted to abdicate our organization from its duty to change. Another spoke against because his ladies auxiliary was worried they might lose power of their organization. All of these seemed like poor reasons, and displayed the politics of power I have grown to resent in society.

The measures passed by a significant margin, well above the required two-thirds majority. The measure was long overdue though, and the debate more vigorous than I expected.

There are so many things I hear modern veterans demanding from service organizations. But these demands require our participation in order to shape the culture; issues that we want addressed or negotiated. However, the VFW remains a representative body, only acting on the interests and urgency of its active members. I stared at the empty chairs and thought how hard it is to change the organization when the majority of my generation would rather complain than show up.