How I Ended Up Sharing My War Stories With 200 Strangers

Back in the early Fall, my friend called and asked if I would do him a favor. He needed someone... 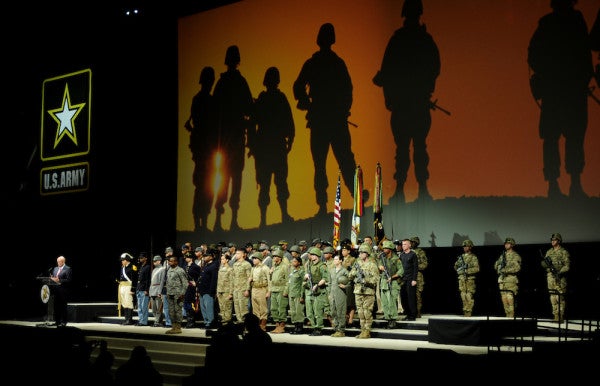 Back in the early Fall, my friend called and asked if I would do him a favor. He needed someone to help him with an annual performance in New York City called The Telling Project. His non-profit organization, Veteran Artist Program, helps coordinate and produce one-night-only events across the country that showcase a handful of veterans telling their war stories.

Sure, I do backstage stuff, I said. Acting isn’t my thing, I said. He said he would have the writer contact me. I figured I could maybe run lights like I used to back in ages past.

When the writer called, we had a lovely conversation during which I recounted a few stories I’ve told over and over: The funny ones, the ones on the surface that I can pull off the top of my head and say with a smile. But we also talked about things I don’t share often; indeed one of the things I don’t like to put a voice to at all: The day my career ended with a very literal bang.

But that’s the story he chose to write, to mesh with the other tales of soldiers and Marines. The story I don’t talk about was now about to be shared with 200 strangers. I didn’t tell anyone I knew to come and watch the performance. I rejoiced that my parents were out of town and my friend-who-is-a-boy was busy filming his television show pilot. I was embarrassed: I was standing there with my script in my hand. My brain couldn’t learn lines and cues; I can hardly recall my breakfast. I was putting what I’ve tried for years to hide out on stage for people to see.

And it hurt. Rehearsals meant I had to relive the story over and over. Confessing my new-found, IED-generated inabilities to not just the audience, but to myself. It was awful and horrible.

But it was also the best thing for me. Afterward, members of the audience with traumatic brain injuries thanked me for putting a voice to what they had not yet been able to say. Family members said they had a better understanding of the condition and how it can affect those who have traumatic brain injury, even those who went through years of therapy to try and dampen the impact. My jerk friend who got me into this mess gave me a huge hug and bought me a beer and I admitted I might feel a little relieved to finally have some of this out in the open.

The Telling Project is one of the best and worst things I have done since leaving the service. I didn’t want to tell that story, but I realize now that at least I can and admit my limitations. It prompted me to go back to therapy and maybe move forward, and hopefully motivated others to find ways to push themselves, too, when they are ready.

It took me a month and a half just to be able to write this reflection. It’s even hard for me to admit something was hard. I’m probably a therapist’s dream.

It’s not so much when we do it, but that we do it at all. If you can catch The Telling Project in a city near you, please do, and support others as they finally put their words out there.