Dec. 5, 2016 marks the 30th anniversary of the Clint Eastwood classic, “Heartbreak Ridge.” Some of you millennial types may … Continued 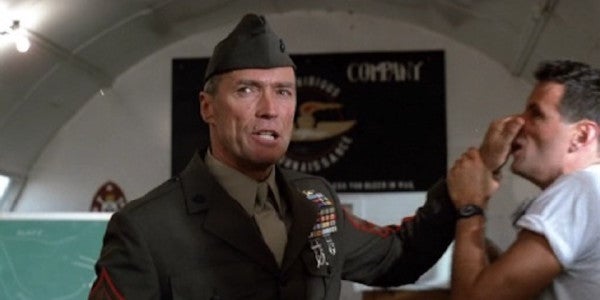 Dec. 5, 2016 marks the 30th anniversary of the Clint Eastwood classic, “Heartbreak Ridge.” Some of you millennial types may not have heard of it, much to your disadvantage, though perhaps the saltier ones among you are shouting “Ooh-Freakin’-Rah!” right now. “Heartbreak Ridge” might not be the entire reason I joined the Marine Corps, but it was probably the reason I was so excited to do it.

This film is probably the last major example of the classic war movie formula (spoiler alert!) — a unit of screw-ups gets tough new sergeant whom the troops hate until he earns their respect and eventually leads them successfully in combat.

Gunnery Sgt. Tom Highway, played by Clint Eastwood, is the leader, in what might be his meanest and most scowl-filled performance outside of 2008’s “Gran Torino.” Eastwood has apparently been a hardass 70-year-old for 30 years now.

“Gunny” Highway has had a lot of ups and downs in his career. He earned the Medal of Honor at Heartbreak Ridge in Korea (yes, it was actually an Army battle). That was over 31 years ago in 1983 when the movie takes place, so you know Highway has had a rough time at promotion boards.

When he reports to the 2nd Reconnaissance Battalion, he finds himself opposed at every turn by his CO, a martinet major from supply. Some will find humor at a gunny being in charge of a platoon with barely enough Marines to form a squad, and other inconsistencies. Still, “Heartbreak Ridge” is damn motivating as Highway takes his band of misfits from zeroes to heroes, culminating in combat during the Urgent Fury invasion of Grenada (yes, that was a big deal at the time). Highway didn’t just influence those fictional Marines, though.

Here are six of the lessons he taught every military-minded youth of the mid-1980s.

Shock and awe isn’t just for bombing campaigns. Sometimes you have to let them know you mean business. When Highway meets his platoon, he lets them know, in no uncertain terms, that things are about to change. There are times a soft approach is best, but when there are big problems, one has to be tough and tell people that “I’m not doing this because I want to take long showers with you assholes!” (That exact phrasing may not go over as well in 2016 as it did in 1983, for a variety of reasons.)

I don’t know if “Heartbreak Ridge” started this phrase or not, but it certainly took root after the movie was released. Combat demands one be willing to improvise, adapt, and overcome, which the movie shows by having the platoon commander call for an airstrike via a collect phone call to Camp Lejeune (in real life that was an Army Ranger). To get to that level, one has to require that level of ingenuity every day, even if it just means forcing one’s people to figure out what t-shirt the gunny is going to wear to PT.

Even when your PT (or a Hollywood filmmaker’s imagination) takes you through the famous scrub-brush and desert terrain of Camp Lejeune, you can still keep a sense of realism by shooting at your men with an AK-47 when they don’t expect it. Shoot at them enough, and eventually, they’ll be okay with it. It may be a little riskier, and may even get you in trouble with your superiors, but realistic training will keep your people alive in combat.

4. Take pride in your appearance.

At one point, Highway tells his men, “When you start looking like Marines, you’ll start feeling like Marines, and pretty soon, God dammit, you’ll start acting like Marines.” This is probably the most true thing anyone has ever said. Oftentimes, taking care of uniform issues and cleanliness is perceived as administrivia. In reality, it’s one of the biggest things that distinguish bad units and organizations from great ones, both in and out of the military.

Of note, “Heartbreak Ridge” was also very forward thinking environmentally for the time. As Highway stomps on a Marine’s non-regulation sunglasses, he informs the Devildog that “You shouldn’t litter, Fagetti, it’s ecologically unsound.” Don’t litter. It’s bad for the planet.

5. Stick up for your friends.

Even if they are only your friends because they are the only other Marines there, it’s worth it. It may mean fighting for them. It may mean just taking care of them, but you have to ensure that your people are okay, because hopefully, they’d do the same for you. This is especially true when it comes to dealing with locals in sketchy bars in Jacksonville, North Carolina.

6. Don’t give the prick the satisfaction.

Sometimes there is no high-minded or lofty motivation to give people. Sometimes it all comes down to pride. Whether it’s a prick major from supply making you PT until you drop, or just the world in general telling you you’re not good enough, never let them know they’ve beaten you. That’s as true in battle as in life.