Andre The Giant Will Be Memorialized In Upcoming HBO Documentary

For WWE fans, such as myself, Monday’s announcement that a documentary about Andre the Giant is in the works has... 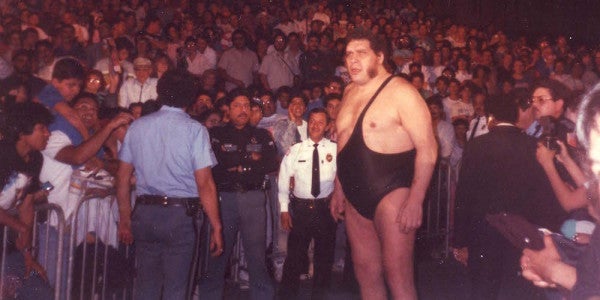 For WWE fans, such as myself, Monday’s announcement that a documentary about Andre the Giant is in the works has the 12-year-old in me pretty pumped up.

WWE, HBO, and Bill Simmons Media Group announced on Feb.13 that they’ll be teaming up to produce a feature-length documentary film about the “Eighth Wonder of the World,” André Roussimoff.

“Going back to 2007 and 2008 when I was creating and developing ‘30 for 30’ for ESPN, Andre’s story rode the top of every single sports documentary wish list I ever made,” said Bill Simmons, in a statement released by HBO. “We always hear about unicorns these days; Andre was the ultimate unicorn. He’s a true legend. Everyone who ever crossed paths with him has an Andre story — and usually four or five.”

The film will be directed by Emmy-Award winning director and producer Jason Hehir, who previously worked with Simmons on his “30 for 30” series.

André René Roussimoff was born in France in 1946, and while he showed signs of gigantism early on — he grew to be more than seven feet tall in his teens — he wasn’t diagnosed with the condition until his 20s. Roussimoff began training in Paris as a wrestler when he was 17, making a name for himself in Europe, Australia and Africa. In 1970, he was spotted by Vince McMahon Sr. after making his debut in Japan. It was in 1973 that Roussimoff became the wrestler many grew to know and love: “Andre the Giant.”

The peak of Roussimoff’s career came in 1987 when he wrestled Hulk Hogan at the Silverdome in Michigan during WrestleMania III for the championship. At the time, Hogan was the three-year reigning champion, while Roussimoff had not been defeated in 15 years. The match was one of the most iconic in WWE history and Hogan went on to defeat Roussimoff by body slamming him in front of almost 100,000 fans. That same year, the “The Princess Bride” was released, in which Roussimoff starred as the gentle giant, Fezzik.

While Roussimoff immense size made him a formidable opponent, and an unforgettable character in the world of wrestling, it ultimately led to numerous health problems. On Jan. 27, 1993, he died of congestive heart failure — a result of his gigantism — at age 46.

According to HBO, the documentary project will follow Roussimoff’s life and career, and include never-before-seen footage and interviews with the giant and those who knew him best.

“For more than 20 years, Andre the Giant’s larger-than-life personality and unique charisma captured the imagination of fans around the world,” WWE Chairman & CEO Vince McMahon said in a statement. “I will always value our friendship and am proud to tell story.”