As A Former Embassy Guard, Here’s What I Know ‘13 Hours’ Got Wrong

“This is a true story.” This text appears at the opening of “13 Hours: The Secret Soldiers of Benghazi,” the … Continued 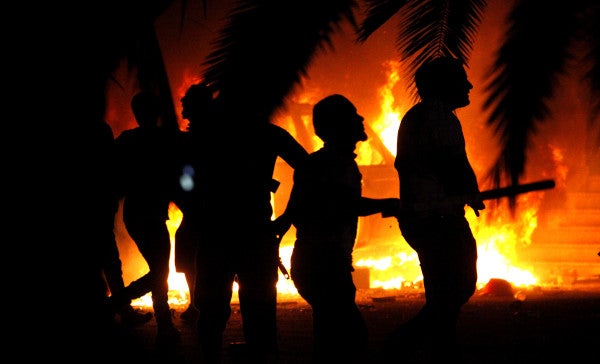 This text appears at the opening of “13 Hours: The Secret Soldiers of Benghazi,” the new film about the terrorist attack on the U.S. diplomatic compound in Benghazi, Libya, in 2012, directed by Michael Bay. The bold claim dares you to challenge it and turns your focus to the manyinaccuracies,exaggerations, and outrightinventions that turned a very real tragedy into an explosive action film.

There are plenty to choose from. The film ignores the findings of numerous bipartisancongressionalinvestigations to instead construct a fictional narrative of CIA security contractors being betrayed by cowardly bureaucrats and abandoned by the U.S. military. None of this is true. Yet, despite all that, there was something about 13 Hours that at least felt true.

13 Hours is a story about the limits of American power. This makes it very different from other films like “Act of Valor” or “Zero Dark Thirty,” which unapologetically glorify our special operations troops as modern-day Spartans and our intelligence analysts as superheroes. If 13 Hours makes a political statement, it is a sense of outrage at the lack of American omnipotence. The characters lament the lack of air support and reinforcements, and in one scene, the CIA station chief absurdly orders his analysts to “find me any carrier battle groups in the vicinity!” Throughout the movie, the audience is intended to be shocked and dismayed that the cavalry does not arrive in overwhelming force at the first sound of gunfire. As a former Marine embassy guard, it was no surprise to me.

RELATED: 8 emerging threats the Defense Department will face in 2016

The reality is that the world is a big place, and American military strength has never been infinite or particularly nimble. Early in the film, the characters gripe that diplomatic facilities normally are garrisoned by U.S. Marines. In 2012, I was one of those Marines, stationed at a U.S. Embassy to protect the lives and operations of Department of State personnel. At the time, my detachment of seven were the only Marines in the entire country. Watching 13 Hours, I tried to imagine myself and my detachment transplanted to Benghazi that night. Instead, we were on duty a thousand miles away, watching reports roll in and joining the rest of the world in trying to sort out what was going on. I like to think that we might have made a difference, but watching the images of intense combat with scores of attackers, it was hard to feel sure. I remember wishing I was there, that there was something I could do to help. I remember cursing out the window of my embassy’s command center, daring the perpetrators to attack me instead. I felt helpless.

Helplessness is a feeling to which many service members and veterans can relate. The burning need to do something when you hear that your brothers and sisters are in trouble, and the frustration with being unable to do so. When 13 Hours says that it is a “true story,” this is the part that is true.

The film is also incredibly war-weary. The cinematography does an excellent job capturing the security contractors’ sense of hypervigilance and distrust for the local Libyans in scenes that will resonate with many veterans, regardless of their feelings about the rest of the movie. It reminded me of the way “The Hurt Locker” successfully captured the strangeness of coming home from deployment in its iconic scene in the supermarket breakfast cereal aisle.

Walking into 13 Hours, I expected an “American Sniper”-style anthem to interventionism; a world of good guys versus bad guys. I was braced for the film to demand greater use of the American military to punish the perpetrators and show U.S. strength, while conveniently leaving out that the mastermind of the Benghazi attacks iscurrently in U.S. custody and awaiting trial. But, if anything, 13 Hours was pessimistic about American leadership in the world. Toward the end of the film, a CIA analyst attempts to remain behind in Benghazi to continue his work, and a security contractor berates him for it, saying “Why? So that more guys like Ty and Glen have to come back here and save your ass?” When a local Libyan who had fought with the Americans stays home instead of evacuating, the characters tell him, “Your country has to figure this shit out,” instead of praising him, thanking him, and promising support.

The film paints the Department of State and CIA personnel as naïve and over-educated idealists who cannot understand that “you can’t tell the good guys from the bad guys.” The civilians in 13 Hours are fools who must be rescued, and bureaucrats who inhibit the men with guns from doing their jobs. This does a grave disservice to the brave men and women in our diplomatic corps and intelligence community. Rather than being weak, effete elites, blissfully ignorant of the existence of evil, CIA and State Department personnel deployed in countries like Libya are well aware of the danger they face.

In reality, the CIA station chief, who previously served in the Army as a medic, never issued a “stand down” order. Instead he worked directly with the security team leader to try to secure reinforcements. According to theofficial congressional timeline, the security team departed the CIA annex to rescue Ambassador J. Christopher Stevens less than 22 minutes after the first shots were fired. Far from ordering the team to stand down, witnesses say the station chief’s response to the proposed rescue mission was“absolutely.” The CIA security contractors were undoubtedly heroes that day, but it is truly unfortunate that director Michael Bay chose to celebrate their heroism by unjustly denigrating the bravery and resolve of others.

In Benghazi, the enemy is clear: The terrorists who attacked the American facilities and killed innocent American diplomats, security personnel, and allied Libyans. There was no need for 13 Hours to invent new enemies. Diplomats like Stevens took a deliberate and calculated risk by working in Benghazi, and they did so by engaging with the local people with handshakes and conversation rather than hiding behind barbed wire and blast-resistant barriers. Diplomats around the world take these kind of risks every day, knowing that the United States will be safer for it. Some of the bravest men and women I have ever met have been diplomats and CIA officers. It is precisely the limits of American military power bemoaned in 13 Hours that makes their work so important. It would be a shame to dishonor the memory of men like Ambassador Stevens, Sean Smith, Glen Doherty, and Tyrone Woods by disengaging from the places that need American leadership the most and letting their sacrifices be in vain.