"Father Soldier Son" is a must-see. 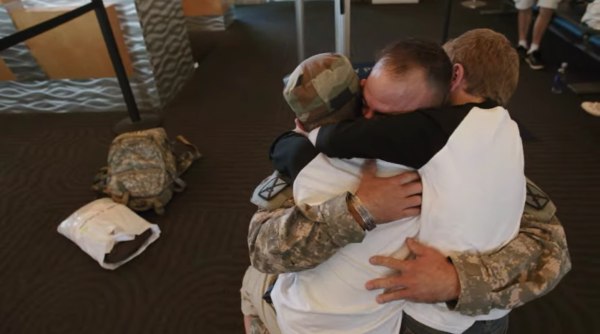 One of the first lines of the new Netflix documentary “Father Soldier Son” comes from a wide-eyed, seven-year-old boy. He’s explaining why his Army Ranger dad is in Afghanistan.

“He said if he’s not doing this right now then we’ll have bullets flying over our heads at night,” Joey says innocently, speaking to someone just out of frame.

There’s something about hearing a sentence like that from such a small voice that breaks your heart — and this movie has moments like that in spades.

“Father Soldier Son” is the emotional result of a 10-year project directed by The New York Times' Leslye Davis and Catrin Einhorn, which provides viewers with a painfully honest window into the life of a military family that has been permanently changed by the war in Afghanistan.

The film follows Sgt. 1st Class Brian Eisch, a single father who finds his identity in service to his country, but worries if he’s doing the right thing for his kids; Isaac, the oldest son who we quickly come to learn is carrying the weight of the world on his young shoulders; and Joey, the youngest of the family, who looks at his dad with such overwhelming, unbridled adoration that sometimes it’s difficult to watch.

When we first meet them, Brian is coming home for a two week break after spending six months in Afghanistan. Holding homemade signs and small American flags, bursting with anticipation, the two young boys — 12-year-old Isaac and 7-year-old Joey — can barely contain themselves while waiting in the airport to see their dad. And when they finally do, the reunion is everything you hope it will be.

The two boys, crying, sprint to Brian the second they lay eyes on him.

Strangers around them start clapping at the sight of the young, handsome soldier scooping his kids into his arms.

Isaac melts into his dad, seemingly letting down his guard for the first time since he said goodbye six months before.

But the two weeks they have together flies by. Brian is back in Afghanistan soon after. He tells the camera that his “biggest fear” is letting deployment change him, and not being the “same fun dad” when he comes home to his kids.

Brian is later injured after getting shot in the leg during a raid on a Taliban-held village. He comes home, determined to heal and keep his leg, and hopes to get back to the way things were despite constant pain that he says almost has him in tears.

And in the background, we watch as the weight on Isaac’s shoulders grows heavier.

He’s constantly hovering nearby in case his dad needs him, eager to make things easier if he can, despite barely being taller than the wheelchair he’s pushing. He admits at one point that his dad’s injury “kinda messed me up a little.”

Like so many other kids whose childhoods are shaped by a war they can’t understand, it’s clear Isaac has had to grow up faster than he should have.

A few months after Brian’s injury, Isaac says he’s feeling “really patriotic,” and that he wants “to help, a lot.”

But as the years go by, the little boy we first met in a Ranger t-shirt four times his size grows wary. Brian ultimately loses his leg, and at one point tells a stranger asking about his service that the cost was worth it. But Isaac isn’t so sure.

Davis, one of the filmmakers, told Task & Purpose in an interview that she and Einhorn want viewers to “interrogate their own ideas and preconceived notions about a family like Brian Eisch's,” and reflect on the values we put on things like masculinity, duty, service, and parenting.

“We want people to examine the long-term costs of war,” Davis explained.

“Father Soldier Son” isn’t about just one family — it’s about thousands of families just like the Eischs. It’s about sons who join the service because their fathers want them to, and parents who struggle to find their place in the world when the one thing they believed they were made to do is no longer an option. The film asks but does not offer an answer on what kind of impact that can have on children.

It’s about the every-day moments you don’t see in the emotional military homecoming videos on Facebook — like when Joey is crying in frustration because he thinks he’d be better at wrestling if only his dad hadn’t gotten shot and was able to get on the mat with him. Or when Brian’s fiancé says he isn’t engaging with their family but she can’t figure out why, or when Brian says he feels like a burden on the military because he’s not “mission-capable” anymore.

You can’t help but feel heartbroken when you realize that, despite his best efforts, Brian’s biggest fear is coming true — he's not the same care-free, fun dad he was years earlier.

“Father Soldier Son” will make you smile through life’s greatest joys, and break your heart with unspeakable tragedy. It's a must-see film that demands empathy and self-reflection, and forces viewers to confront how a war almost 20 years old has ravaged families around the world, and how it will continue to do so.

The film showcases the resilience and determination so often found in U.S. service members who feel called to serve something bigger than themselves. Most do so with pride. But the film may leave you asking: at what cost?