The military probably isn’t going to cover your hearing loss. 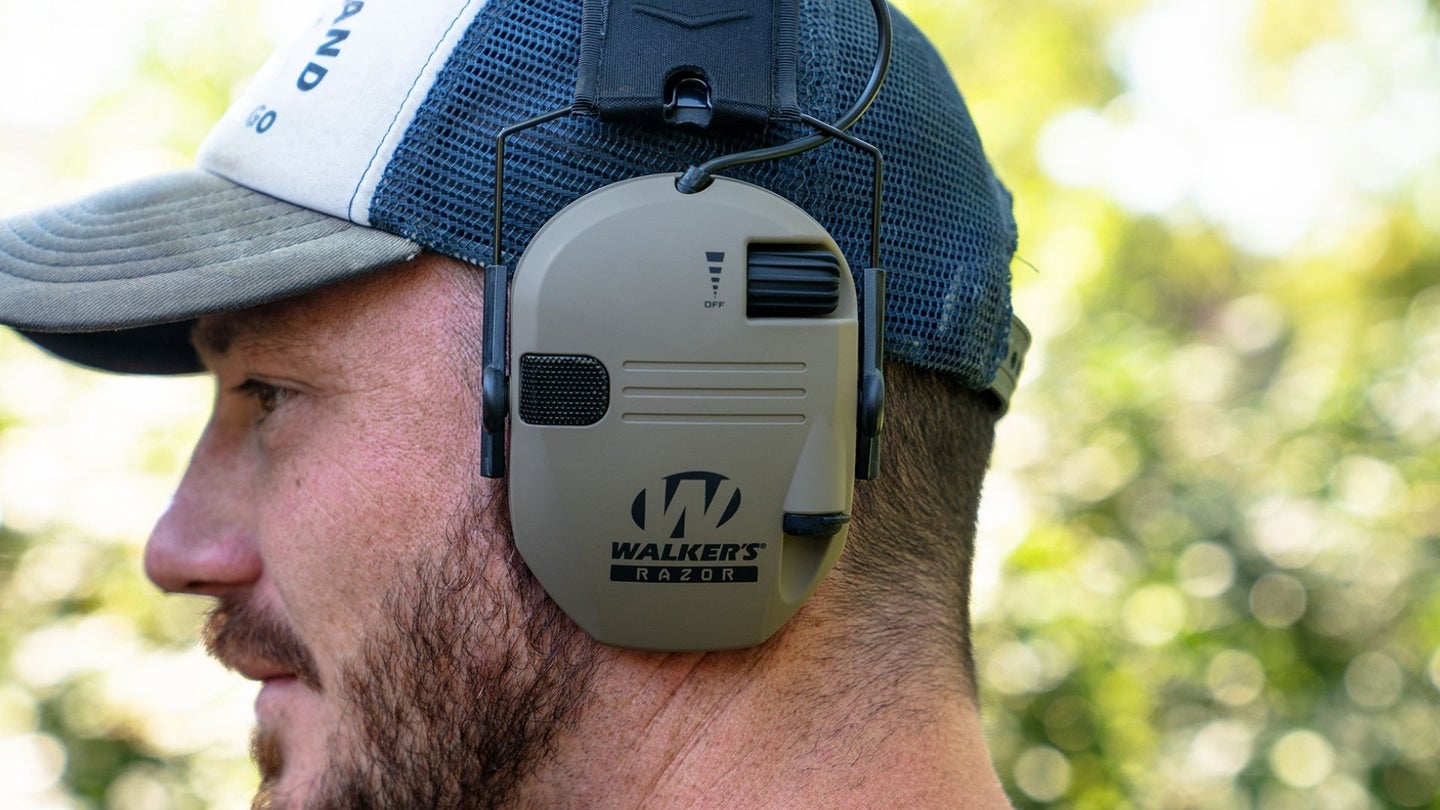 I love shooting, but damn it if the military doesn’t find a way to suck the fun out of everything. It starts with humping to the range about three hours before the sun comes up. Then there’s the issued eye protection that does exactly two things: scratch, and fog up. Next comes the ear protection that somehow manages to fill the ear canal without blocking any sound whatsoever. At least I can take comfort in knowing that hearing loss is in no way service-related and the issued ear pro is definitely not at fault.

Back on the civilian side of things, I’ve often turned to the orange foamies people have used for decades. They’re cheap (which is good because I lose them about every five minutes) and fairly effective, but they also block out other sounds, like range commands and compliments from my friends about how creatively I’ve dispersed my shots across the target. I finally had enough and invested in a pair of electronic ear protection from Walker’s.

Walker’s Razor earmuffs use active noise cancellation to filter out the sound of gunfire while allowing voices to be heard. The technology isn’t new, but it is becoming more compact and affordable. The Razor line of ear protection is mid-level in terms of price, generally coming in at between $50 and $75. As tested, they have an MSRP of $69.99. These active electronic earmuffs fall between passive earmuffs that cost as little as $20 and the high-dollar buds that fit inside the ear and cost as much as $300. I figured that made them a compelling option for budget-minded shooters who don’t want to skimp on safety and bought a pair for myself.

Like any other over-the-ear shooting muffs, Walker’s razor series of ear protection uses plastic cups, thick padding, and an adjustable headband. Unlike the low-cost alternatives, each of these features feels well-built and comfortable. The headband uses metal to stay rigid, but there’s enough padding that it does a good job of disappearing when I put it on. Adjustment happens at the ear cups, so there’s less risk of getting my beautiful out-of-regs locks caught while I get a better fit. The soft––but dense––ear padding feels equally high-end considering the price.

The Razor name refers to the ear cups’ thin shape: only about an inch thick. Inside each small housing is an omnidirectional microphone, a speaker, and whatever wizardry Walker’s uses to connect the two. Having two microphones allows the Razor to provide directional sound, and the low-profile volume knob provides a nice range of output settings. Two AA batteries go on the right, the volume knob is on the left.

There’s also an audio jack for Walker’s surprisingly inexpensive radio attachment (sold separately). Is that too Call of Duty for my taste? Yes, it is. But it’s less than $50, so I could be convinced to buy one if only I were cool enough to have a shooting buddy to talk to.

How we tested the Walker’s Razor earmuffs

This is my go-to ear pro, so it’s been used on rifle and pistol ranges in the past. Because testing for this article occurred during a beautiful Wisconsin fall, I drove out to my local trap and skeet club for a few rounds of clays. I trust you’ve all heard a firearm go off without ear protection, so you know what it’s like to use standard issue earplugs and we don’t need to bother with a side-by-side comparison there. I did bring along a pair of disposable foam earplugs, which are a perennial favorite because they’re dirt cheap and they work.

Shotguns don’t have the distinct crack of supersonic rifle ammunition, but it turns out that a 12-gauge with a 28-inch barrel has a surprisingly similar decibel output compared to 5.56×45 with an 18.5-inch barrel. For whatever reason, a noise reduction rating doesn’t actually signify the number of decibels a given sound is reduced by. Instead, we’re supposed to subtract seven from the NRR and divide by two. Intuitive, right? That means that Walker’s Razor earmuffs, identified as NRR 23, should reduce the sound of a gunshot from 150 decibels to 142 decibels. According to the Hearing Health Foundation, that’s more like what you’d experience when a jet airplane takes off––not quiet, but better nonetheless.

The first time I brought these to the shooting range, I was hooked. The fit was comfortable and the sound quality was excellent. Voices were crystal clear and I could even pick up little sounds like dry leaves crunching under my feet and empty brass rolling on the ground. Ambient noise can even be amplified up to five times its original volume, so there was ample room for customization. At any volume setting, reports from rifles, pistols, and shotguns are all reduced to a soft pop. These Razor earmuffs don’t offer multiple sound profiles like some higher-end ear protection, but there wasn’t really anything I’d want to change. The volume knob that doubles as the power switch was always easy to reach and use, with or without gloves.

At $70, this ear pro is fairly priced. For less than $35 on sale, it’s a hell of a bargain. The sound quality is excellent and I prefer earmuffs to most earbuds in terms of comfort. The Razor’s active noise cancellation works well enough to muffle gunshots to a soft thud without diminishing the audio clarity of voices. Getting this kind of electronic hearing protection in earbud form will cost more than $100, so opting for the over-ear style is a good way to save money that could be spent on instruction, ammunition, or friendly wagers with your range buddies.

Ease of use is another strong point. There are no nasty ear inserts to keep track of, no apps to pair, and no touch-sensitive panels to master. Just rotate the volume knob to the on position and set it at the preferred level. For electronic hearing protection, Razor earmuffs are surprisingly analog. If you bring friends to the range, this is a good option to use as a loaner since it doesn’t have a learning curve (or have to go inside everyone’s ears).

When it comes down to it, this is just affordable hearing protection that gets the job done.

The main drawback of Walker’s Razor is the over-ear design itself. Many shooters don’t like the bulk of earmuffs. If you’re one of them, you can choose between cheap disposable earplugs, reusable earplugs, or active earbuds with noise-canceling software. Going electronic will cost significantly more than a set of Razors. If you want multiple audio profiles and Bluetooth, you might end up spending 10 times as much. If that’s important to you, though, there are plenty of options available.

Another consideration to keep in mind is the recurring cost of batteries. Earplugs don’t use batteries and earbuds are rechargeable, so this is one of the only options that requires shooters to stock up on AAA batteries. Will you have to replace them often? No. But it’s an additional cost nonetheless, and the more you shoot the quicker it will add up.

Walker’s ear protection is a common sight at American shooting ranges, and the more I get to know my Razor earmuffs, the more that makes sense. I love the sound quality and genuinely appreciate the simple controls. I’ll trade fancy features and Bluetooth for a simple volume knob any day of the week––especially when I can save up to 80 percent by doing so. I also prefer over-the-ear hearing protection; even the best inserts get annoying after about 30 minutes.

Not everyone will share my personal taste, but one thing that’s indisputable is the bang for the buck. Walker’s makes quality electronic hearing protection available to the masses with the Razor, and we can all get behind that.

If you shoot indoors, you should be doubling up on ear protection. Even the best shooting earbuds I’ve used don’t offer adequate protection for the kind of abuse indoor ranges subject ears to. Your best bet is to use earmuffs on top of earplugs, and this style will let you retain enough of your hearing to communicate with other shooters and hear range commands.

Q. How much does a pair of Walker’s Razor earmuffs cost?

Q. Are electronic ear muffs worth the money?

A. When it comes to safety equipment, I generally advise people to buy the highest level they can afford. Foamies are better than nothing. So are bulky, old-school passive ear muffs. If you can afford electronic ear protection like Walker’s Razor, you’ll get the usual safety benefits along with the added convenience of being able to hear what’s going on around you. I can’t hear shit with earplugs, so I’m happy to pay for ear protection I don’t have to remove after every string of fire.

Q. How do these stack up against other forms of ear protection?

A. Ear protection is usually compared using a noise reduction rating, which identifies how many decibels are removed from a given sound wave before it reaches the eardrum. Some foam earplugs are surprisingly effective––between NRR 22 and NRR 33. That’s comparable to larger, more expensive earmuffs. Walker’s Razor ear protection is designated as NRR 23.

But there’s a catch. Foam earplugs only work well when they’re used correctly. If you fail to create a tight seal in your ear canal, they can’t do their job. Lots of people get tired of having foam crammed in their ears and skip ear pro altogether, in which case the rating doesn’t make a damned bit of difference. If active noise cancellation and comfortable padding will get you to use ear protection, I’m all for it.

A. These earmuffs use an over-the-ear design to muffle all sound. A forward-facing microphone in each one receives sound waves and transmits them to your ear with a small speaker, which can be controlled with a volume knob on the left earmuff. When a gunshot is detected, the earmuffs compress the signal to reduce its volume within 0.002 seconds. All this is powered by two AA batteries.

Q. My ears are super tough.

A. That’s not a question––please be respectful of the Q and A format––and no they’re not. Tinnitus sucks, and so does asking people to repeat everything while you stare at their mouth.