Review: the FalCom OTE2000 is the most customizable tactical headset you’ve never heard of 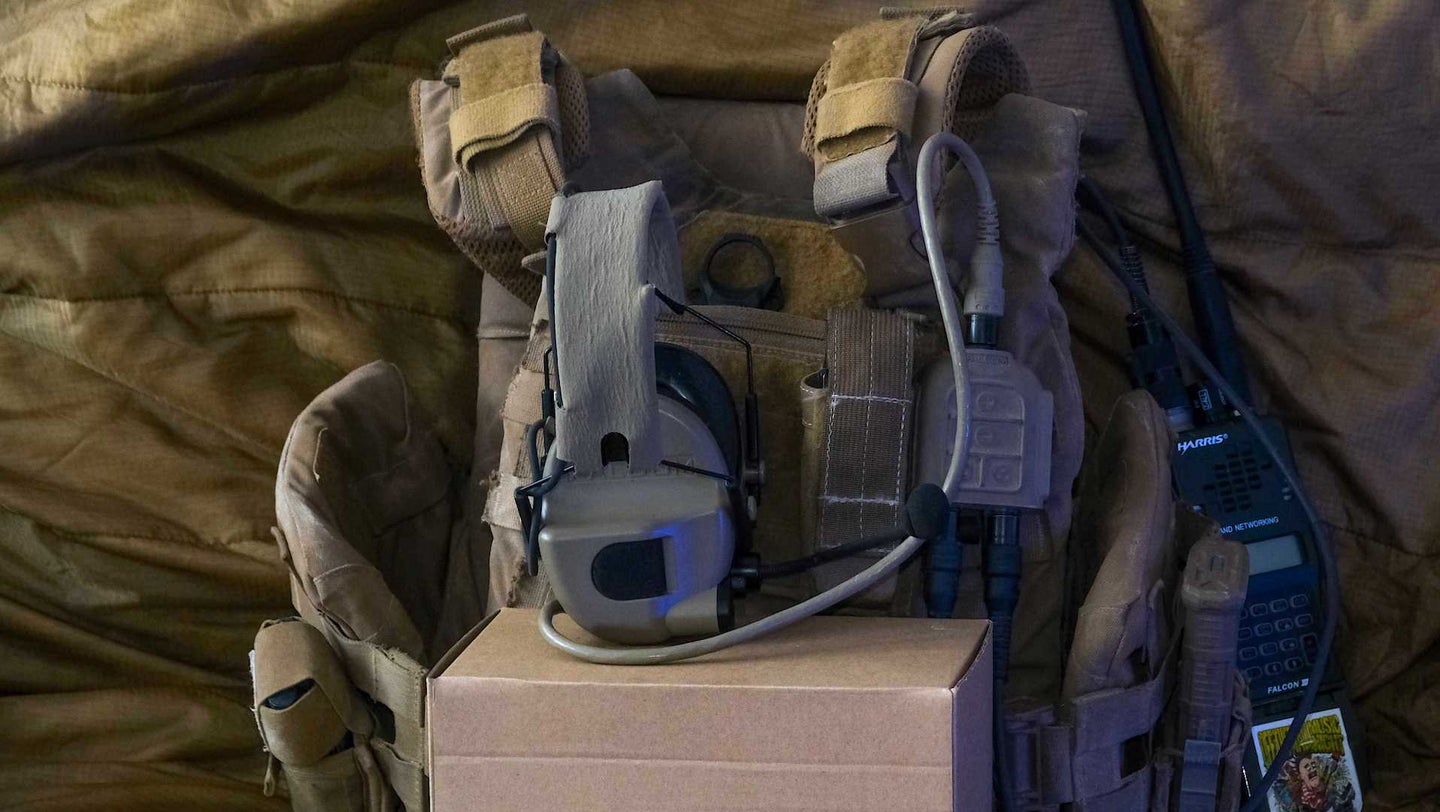 The FalCom OTE2000 tactical headset is part of an advanced digital communications system that allows you to follow multiple sources simultaneously while maintaining situational awareness out in the field. Compared to other options, the customizable headset delivers high-end sound clarity as well as exceptional noise reduction.

Before learning about the OTE2000 at SHOT Show 2022, I had already written a massive compendium of powered hearing protection and I thought I had found the best. Then, FalCom sent me a few samples to test and I discovered something that was radically different than what’s currently available.

While FalCom is the brand, it also refers to “advanced hearing protection solutions enabling special operations, military, law enforcement and security personnel to communicate in extreme environments,” according to its parent company GN Group, a Danish-based entity operating six other hearing aid and headphone technology brands.

This is less of a review of the headset and more an evaluation of an entire ecosystem of communications equipment that flies completely under the radar. For this article, FalCom provided me with three headsets, control units, and various accessories for testing. I also had access to a FalCom representative who offered answers and insight for using the equipment. Other than providing samples and instruction, FalCom had no role in shaping this article. Finally, the appearance of DoD personnel in this story does not indicate endorsement of this article or the products therein by the Department of Defense or any other agency.

When you receive a new FalCom OTE2000, it comes packaged in a nondescript brown cardboard box with a white paper label identifying the manufacturer, National Stock Number, part number, and other critical data. While commercial buyers may expect a little more flash, this no-frills packaging is ideal for government supply shops. Like the box it comes in, the headset is also relatively plain: two ear cups with foam cushions connected with an adjustable padded band.

The FalCom ear muffs differ from common designs like Peltors, Sordins, and Liberators in a few ways. Immediately, you’ll notice that the headset doesn’t use an internal power source and instead relies on an external power source.

Also, the exterior microphone designed to capture direct and ambient noise is positioned in the center of the tan polymer cup as opposed to the front. The FalCom rep said it improves “sound localization,” or how your brain identifies the direction of a noise.

The muffs connect using a downlead cable with a 14-pin Amphenol connector that attaches to a control unit, which uses two of the same 14-pin connectors to connect to your radio or radios and a power supply. FalCom offers two Multi-Functional Control Units. The main difference between them is simply one has more connectors than the other.

The MFC1000 is designed with one communication port to support up to two channels (with the use of a splitter or dual-band enabled radio), whereas the MFC2000 has two ports to support up to four channels. The Marine-proof designs are differentiated by embossed shapes to ensure that you don’t connect the headset to the cables meant to go to the radios or vice versa, since they use the same type of connector.

How the MFC units work

Each control box has volume keys as well as push-to-talk buttons for the channels that it controls. There are four volume settings on the control units, which control the volume of the hear-through audio.

The lowest setting is off, meaning that only radio traffic comes through the headset, and the volume of the radio is controlled by the radio itself. This is useful for intently monitoring the radio in loud environments like a vehicle or an aircraft.

The second setting is “comfort mode,” a noise filtration setting that suppresses constant noise such as generators and AC units, while not suppressing the human voice, allowing situational awareness in environments with high levels of noise pollution.

The third setting is the default setting, and it’s a remarkably clear hearing setting that sounds essentially identical to your hearing without a headset on, and which actively suppresses frequencies that are louder than others while amplifying the quieter frequencies. This is good for general purpose use.

The fourth setting is “surveillance” mode, which boosts all frequencies and provides you enhanced hearing specifically for listening for movement in the distance, hence the name. This mode is good for extremely quiet environments.

Lastly, the downleads that go from the control box are as varied as you need them. FalCom provided me with six-pin MBITR connectors, Motorola connectors, connectors to use with an armored vehicle’s intercom, and several external battery capsules. The battery capsules take up the Com 1 port, and provide up to 200 hours of power from a single AA battery on the third setting, in the event that the radio that you’re connected to doesn’t provide power output, such as with some older legacy radios like the A/N PRC-117F, and most commercial radios.

For most of this year, I tested the FalCom OTE2000 headset with the MFC2000 in every environment ranging from calling for fire in the training field to protecting my hearing from machine-gun fire on a crew-served range. I also used them for monitoring comms, or even firing in an enclosed shooting range with extremely loud weapons. Additionally, I loaned the other two sets out to a Marine gun chief on an M777A2 howitzer, and a mechanic in Marine motor transportation to see how they functioned in those environments.

In our testing, we found that the overall environmental hearing was extremely clear, the clearest that any of us had ever experienced. To my own ears, nothing else approached it in terms of clarity, not even the pricey Ops-Core AMP headsets. Once a radio is plugged into the control unit, it automatically maps the first push-to-talk button to that radio, and when you press that button, it feeds your own voice through to your hearing, allowing you to hear your own volume, which prevents you from yelling into the microphone.

The unit will give you warnings if the microphone isn’t properly connected, the microphone ports aren’t covered, the radio that the headset is connected to is not transmitting, or if you plug a battery into the wrong input, making this truly a smart control unit. When I used this for two different radios at once, it automatically panned one radio into my left ear, and the other into my right, so that I automatically knew which radio was which.

When worn on the arc rail adapters, the FalCom OTE 2000s are extremely comfortable on the ears, even for long periods of time and in hot environments, which is the biggest hurdle that many people have to overcome when it comes to headsets.

The sound clarity is the biggest selling point, having virtually no digitization or hiss, and not amplifying the unpleasant sounds of your clothes rustling or the crunching of gravel under your feet. The stereo panning of various types of radios is fantastic as well, further enhancing the clarity of the sound.

The sound clarity extends to radio traffic that’s passed over comms, as the included boom mic does a good job of filtering out background noise and wind, which was very common in the Quackenbush training area of Twentynine Palms.

The smart features of the MFC PTT came in handy to let me know when my battery was getting low, or when another Marine had incorrectly plugged in his downleads, and in one case, after dismounting from an AAV and climbing a hill, it warned me that my A/N PRC-117G radio was experiencing an error, which another Marine quickly diagnosed as being a loose antenna, which is a common issue with those radios.

Finally, we loved the customizability and the sheer wealth of options offered by FalCom for downleads to connect to various radios and communication sources, meaning that this system can work for anyone.

My biggest complaint with the FalCom OTE2000 is that they don’t work as just a headset. You can’t wear them as noise-reducing headphones for hearing protection because they require an external power source.

The comfort is another issue, since the included headband is headache-inducing when worn for long periods under an ECH, so definitely use a rail adapter if you have a high cut helmet.

Another issue with the OTEs is that while the noise reduction of the headsets is adequate, it’s not as high as something like a pair of Liberators or the Ops Core AMPs with their earplugs and over-the-ear combo protection. The OTE is definitely in the same pricing bracket as both.

Finally, hearing in chaotic environments was problematic, and when doing Range 400 at ITX, I had to turn my headset all the way up to hear everything that the rest of my team was saying. This might be just me having hearing issues, but the surveillance mode isn’t made to be used in that regard, since in this setting, loud noises compress the rest of the sound. I’d like more volume control to mitigate this.

FalCom makes an in-ear version of the headset called the ITE 2000, but since my Military Occupational Specialty requires passing a lot of numbers over comms, I’ve found that increased voice resolution is worth having a boom mic in your face. That being said, it’s mildly more water-resistant (IP68 vs the OTEs IP67) and can be useful for those in extremely hot or humid environments, those who still wear low-cut helmets like the ACH or ECH, or for those who might be in a less tactical role in the military or civilian worlds, who still wants comms flexibility.

For use with a high-cut helmet, FalCom offers Peltor-style rail mounts, but I’d prefer using something like the Ops Core RAC arms with the AXL adapters that allow them to be used with standard headsets since I prefer to keep my top accessory rail free on my helmet, and the Peltor-style clips that connect to the headset earpiece are notorious for breaking.

The FalCom OTE 2000, and by extension the MFC 2000, is a system that is designed for people in communications-heavy roles who need to maintain many different sources without losing situational awareness. Forward observers, JTACs, signals intelligence, vehicle crews, and those in command roles are just a few of the roles that the OTE 2000s would excel in.

In a civilian setting, first responders in search and rescue roles who need to monitor many radios, or hobbyists who want to do the same, and who need a durable and comfortable package are also ideal for this headset system.

The FalCom system is a significant investment, but as long as the company maintains the same connection standards for future iterations, they’re upgradeable. Plus, the clarity of the audio cannot be beaten by anything else on the market today.

FAQs about the FalCom OTE2000

A. Because the system depends on outside power, you need to buy the control unit and either external power or a radio plug. The FalCom representative quoted me a price of roughly $1,300 for one set.

Q: What is hear-through audio?

A: Hear-through audio is where a headset has microphones on the outside of the headset that play the audio back through the speakers inside the headset, allowing you to hear your surroundings in real-time.

A: Yes, contact FalCom for pricing and purchasing information, as well as tailoring to your preferred communication method