The photo shows then-Staff Sgt. Louis A. Capozzoli, and he is not on his way to steal your girl. 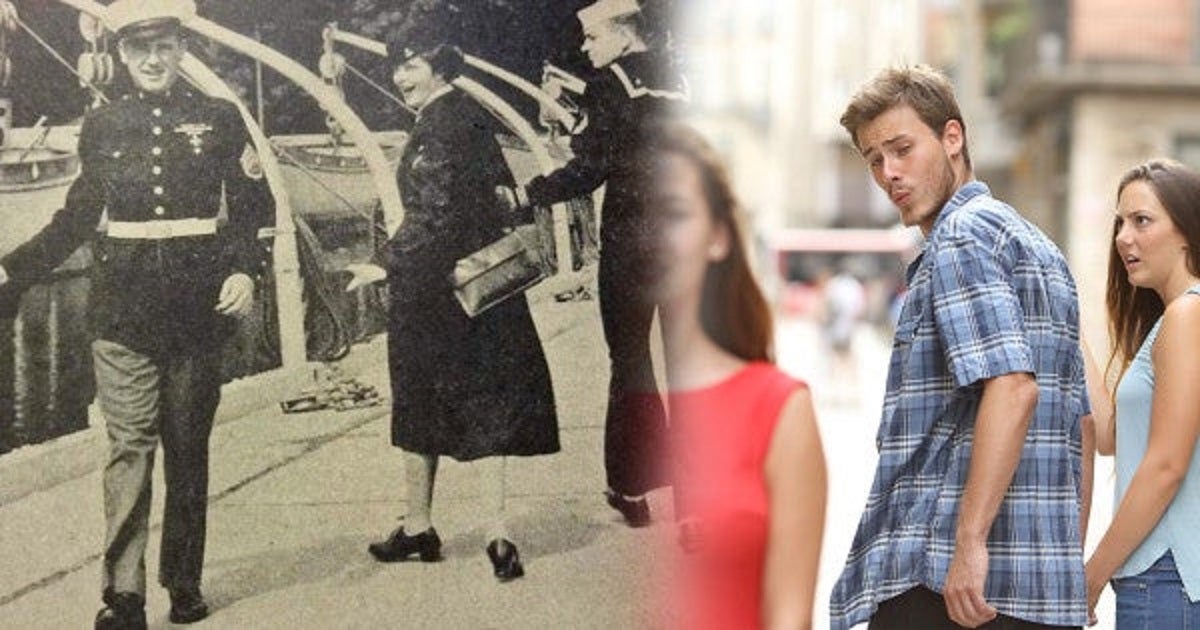 It’s a photo for the ages: a Marine NCO, a Greek god in his dress blues, catches the eye of a lovely young woman as her boyfriend urges her on in distress. It’s the photographic ancestor of the much-loved “distracted boyfriend” stock photo meme, made even sweeter by the fact that this is clearly a sailor about to lose his girl to a Devil Dog.

Well, this photo and the Marine in it, which hopscotched around Marine Corps Facebook and Instagram pages before skyrocketing to the front page of Reddit, are very real.

The photo shows then-Staff Sgt. Louis A. Capozzoli — and he is absolutely not on his way to steal your girl.

The photograph first appeared in the October 1950 issue of Leatherneck magazine, according to Marine Corps historian Kara R. Newcomer, and it is indisputably presented as a romantic look-back.

Was Capozzoli really as much of a ladykiller as he appears in the photo? Hell yes, according to family members interviewed by Task & Purpose.

“He was very clever and very handsome … We always used to say he looked like Clark Gable or Errol Flynn.” Capozzoli’s daughter Linda Herbst told Task & Purpose on Friday. “He was a good dancer, and he always said ‘don’t marry a man who doesn’t dance.’ He was still pretty handsome at 80 when he died.”

Capozzoli had met and married his wife in 1945; according to Herbst, he was engaged to a Rockette from New York City at the time, but was so enamored with his future wife that he dumped the dancer immediately.

But while Capozzoli may have been the most dapper Marine in the continental United States at the time, he was no Don Juan.

“He was very charming, but he was always respectful of women. He loved women,” Herbst told Task & Purpose. “He called all ladies ‘dolls’ rather than ‘broads,’ and if he didn’t remember your name, he would just say ‘doll.’ Women would fall all over the floor over that.”

“Men were flirtatious and they had their ways in the 1940s and 1950s,” she added. “But I think because of who he was and how he was brought up in the Marine Corps, boy, was he a respectful man.”

Louis Anthony Lawrence Capozzoli was born in 1924 in Flushing, New York, according to a detailed account of his service published following his death in 2004. He joined the Marines in 1942, deploying to Guadalcanal, Bouganville and New Caledonia during his three-year stint in the South Pacific.

“When he shared WWII stories, he would say, ‘I joined the Marines at 17 and hit the beach at Guadalcanal in 1942,'” wrote Herbst at the time. “He didn’t hesitate. His country needed him and he answered the call. In our modern world of today, who among us would be willing to quit everything and on 24 hour notice leave family, and friends, behind?”

In 1946, Capozzoli transferred to Headquarters Marine Corps in Washington, D.C., working on recruitment efforts before attending the U.S. Navy School of Journalism in Great Lakes in 1950, where the Leatherneck photo was taken.

That photo was “clearly one of his little recruiting schemes … you know, ‘Marines are more attractive than the Navy,'” Herbst told Task & Purpose, noting that the trio appeared together on the cover of Quill and Scroll later that year.

After graduating top of his class, Capozzoli deployed to Korea in 1953 as a combat correspondent, where he served for three years before returning to San Diego in a series of editor positions within the military.

“He had a wonderful work ethic; he was an artist and she shared it with everybody,” Herbst said. “We always talked about him going into the movies because of his looks, but he was strictly a Marine and a journalist.”

Capozzoli retired from the Corps in 1961 after nearly 20 years of service, but he continued his close relationship with the armed forces in his journalism, writing for for what’s now the Orange County Register for 15 years as a night editor and writing a weekly military affairs column.

“He kept everyone informed about the military through the 1960s and the Vietnam War,” Herbst said. “He was always part of the military, right up until the end.”

Now, 15 years after his death, Capozzoli has taken on the mantle of immortality as a meme, a Marine-specific interpretation of “distracted boyfriend.” And that’s just fine by his family, if totally strange.

“I had to explain that meme to my mom,” Michael Herbst, Capozzoli’s grandson, told Task & Purpose. “[I] also saw my grandpa’s face photoshopped onto the meme, which was weird.”

Related: Meet ‘Veteran With A Sign,’ the Marine grunt who became a meme philosopher