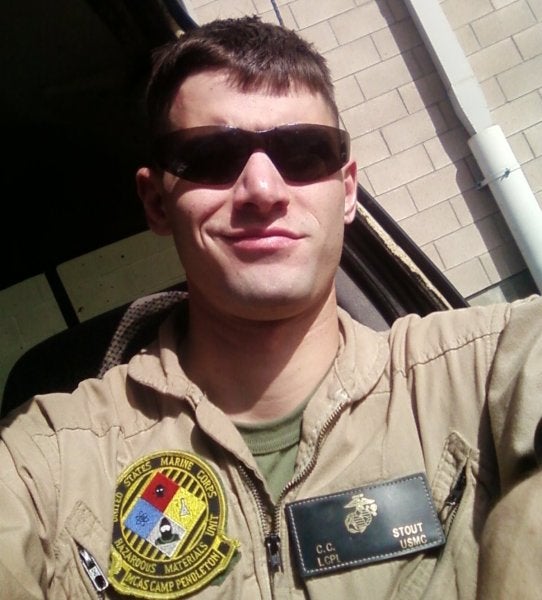 Editor’s Note: The following story highlights a veteran at BAE Systems Inc. committed to including talented members of the military community in its workplace. BAE Systems is a client of Hirepurpose, a Task & Purpose sister company. Learn More.

Craig Stout works on the combat vehicles’ production line in York, Penn. For him, this work is personal. Not only does he dedicate his days to keeping our warfighters safe at BAE Systems, but he was also one of those warfighters himself – he’s a Marine Corps veteran who served in Iraq in 2007. He attended trade school after leaving the Corps and built on his experience as an airframe mechanic while doing so, eventually becoming a certified welder with BAE Systems.

Stout is among the many veterans who joined the company after leaving military service. BAE Systems is dedicated to recruiting and employing veterans and transitioning them back to civilian life. The company also recognizes the perspective they bring to the job, with many having served overseas or engaged in combat.

Stout’s experience allows him to bring a different perspective to his job on the production line. “I’ve been deployed overseas, using equipment made by someone else,” Stout said. “We know what it’s like to be in that vehicle and how it is relied on when we get into hostile environments. We put in the time now to make sure they come home safely.” This care pervades BAE Systems, and is a cornerstone of the work done by – and for – our nations’ veterans. Transitioning service members and veterans often find themselves seeking something more than just a job. BAE Systems fills that void because veterans working at BAE Systems have the opportunity to support the military and work somewhere that celebrates military service.

Stout joined the Marine Corps after graduating high school with a strong desire to leave his small town and see the world. He attended boot camp at Parris Island, S.C. as well as several training schools before officially beginning his military career. He started as a member of Marine Medium Helicopter Squadron 268 in Camp Pendleton, Calif., before deploying to Camp Al Taqqadum in Iraq. “Of all the things I gained in the Corps,” he said. “Self-confidence and a strong attitude continue to serve me well in my civilian life.”

BAE Systems is a global defense, aerospace and security company. They create and deliver products and services for air, land and maritime forces, as well as advanced electronics, security, information technology, and support services. The company takes great pride in supporting the military and veteran communities and is recognized as a top employer for veterans, especially those in transition. BAE Systems employs more than 5,000 military veterans and offers a career-oriented workplace that seamlessly translates specific military job duties and occupational service into civilian positions.

“They really do care about their vets,” Stout said, “I’m proud to be a veteran working for and with them to give today’s servicemen and women the best products we can to bring them home safely.”

The company also provides transitioning resources to ensure its military veteran employees have the resources and support to be successful in civilian life. The hallmark of the company’s resources for veterans is the Warrior Integration Program, a three-year rotational internship program focusing on post-9/11 combat-wounded and injured service members. It capitalizes on their combat military occupational service codes – or specific job duties and rank – and provides skills and training to prepare them for civilian life and ultimately a full career with BAE Systems.

“I like to think my military service has come full circle,” Stout said. “I served my time in the military and now I’m doing my part to support the men and women on the front lines today. BAE Systems provides me the daily support I need to be successful, and I could not be more grateful.”