"PayPal really cares for the whole person, and that includes veteran status" 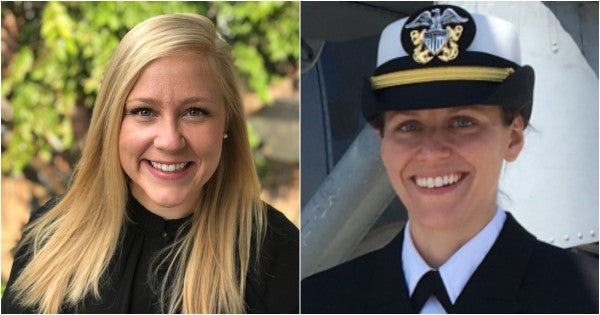 Editor's Note: The following story highlights a veteran at PayPal committed to including talented members of the military community in its workplace. PayPal is a client of Hirepurpose, a Task & Purpose sister company. Learn More.

The mood was somber in Washington D.C. at the Washington National Cathedral on Dec. 5, 2018. Jill Anderson, the program manager for a team of Air Force social aides at the White House, welcomed presidents Jimmy Carter, Bill Clinton, Barack Obama, and Donald Trump to George H. W. Bush's funeral service, which she had helped organize.

“I really wanted to have all these conversations, Anderson recalls. “But my job is to let them be their most authentic selves, and have that control of 'Hey, this is just another person that's having a hard day by attending a funeral.' To be so intimately involved in such a unique point in history was really a powerful experience.”

Performing this highly competitive volunteer position came in addition to her daily duties as an Operations Research Analyst for the Air Force. In that role, Anderson assessed Space Control Acquisitions, Personnel Readiness, and “top level issues for the Air Force,” such as unconscious biases in evaluation scoring. During both the Obama and Trump presidencies, she gave visiting heads of state and other guests tours of the White House; introduced them to the president, first lady, and other VIPs at White House events; and guided them through meetings and photo opportunities.

In September of 2018 and while still on Active Duty Anderson attended BreakLine, which connects veterans to job opportunities in the tech industry. As part of the program, she and her classmates toured several local tech companies to explore employment opportunities. In particular, the culture at PayPal stood out to her. “The people I met were very collaborative, warm and welcoming,” she says. She received an offer from PayPal and moved to Austin for her new role.

For the past six months, Anderson has put her math degree and analysis experience to work as an engineering program manager at PayPal. Although she was initially nervous about having less technical experience than her teammates, she says PayPal has given her the support she needs to grow both her skills and her confidence.

“PayPal really cares for the whole person, and that includes veteran status,” she says. “They gave me not only the space and the time to thrive and develop my skills here, but they also really empowered me to bring my lessons learned from the military. I feel very, very supported here.”

From Seahawks to software

Over 1,400 miles away in San Jose, California, Danielle Stone had also toured potential workplaces with BreakLine. She too found her fit at PayPal.

“I had a phenomenal experience with a couple of different hiring managers, just learning about what the vision is at the company,” Stone recalls. “Finding that right culture fit is really important.”

Stone served for 10 years as a naval aviator, flying MH-60 Seahawks on multiple deployments to the Middle East and teaching new aviators to do the same. Although “there's definitely a thrill to being able to fly,” she found teaching to be the most fulfilling and challenging part of her job, as it pushed her to hone her communication skills. Stone also discovered a passion for the project management work that made the everyday operations of a squadron possible.

“There's a lot more to being an aviator than flying,” she says. “The aviators operate the squadron, building the daily flight schedule, leading maintenance personnel and making sure that everyone in the squadron is trained and qualified. There's a lot of project management in the aviation community.”

Stone also earned her project management professional certification shortly after leaving active duty, which she now uses daily as a program manager at PayPal. The communication and project management skills she honed in the Navy now help her ensure that every team member crafting a piece of software understands and builds exactly what the client is looking for.

“As a program manager, being at the high level of things, I'm able to put all of the puzzle pieces together,” Stone says. “Being able to watch it come together is really fascinating for me.”

Supporting reservists with flexibility and trust

PayPal is committed to fostering a diverse workforce, and that includes making veterans and reservists feel welcome. Anderson says she was “really nervous” about discussing her Reserve obligations with her new bosses but was “pleasantly surprised” by their reactions.

“They all had reviewed my resume beforehand, and so a lot of them asked me, 'How are you doing? Thank you for your service. Are you going to continue to serve? We hope you do; that's a great mission,'” Anderson recalls. “I had verbal support across the board, which is awesome. I actually went back for a week for Reserve duty in September, and my boss was really supportive. My teammates were supportive too.”

Stone says she has also felt her leadership and coworkers backing her commitment to the Reserve — especially since fulfilling her Reserve obligations is more complicated than most.

“As an aviator, I still have to fly, and that's not completely possible on the weekends,” she says. “Between building trust with my manager, and then also with having PayPal's support of serving, it makes it a little bit more doable to be able to fly.” The company's workplace flexibility goes above and beyond for Stone. “I fly commercially to San Diego from San Jose and I just work from home while I'm there,” she says. “Sometimes I'll have a flight in the morning, starting at 5 a.m. and after finishing, I simply transition over into my PayPal meetings in the afternoon.”

Not only does PayPal supply flexible work accommodations for reservists, it also pays the difference between the military's and PayPal's salary during Reserve deployments. Perhaps most importantly, though, PayPal offers veterans the ability to connect with each other through its military employee affinity group, Serve. Stone acts as one of Serve's veteran experience volunteers.

“In the military, there is a sense of camaraderie and community,” she says. “The Serve affinity group gives that opportunity in this unknown world as a veteran transitions into the private sector.”

Anderson finds that Serve not only connects her with fellow veterans and other supportive employees in Austin, but also gives her common ground and companionship when she travels to other PayPal offices.

“Any time I go out to San Jose, I get together with the Serve group for either a happy hour or a lunch,” she says.

They serve in different branches of the military and do different jobs at different offices, but Stone and Anderson both hope other veterans will find their fit at PayPal — and that PayPal can welcome more veterans who bring grit, strategic communication, and leadership skills to the workplace.

“Working at PayPal has been well beyond what I could have hoped for, for my first job outside of the military,” Anderson says. “I feel very lucky.”