How Women In The Military Are Taking On The Business World

Hundreds of women veterans and military spouses filled the halls and conference rooms of a luxury Times Square hotel this... 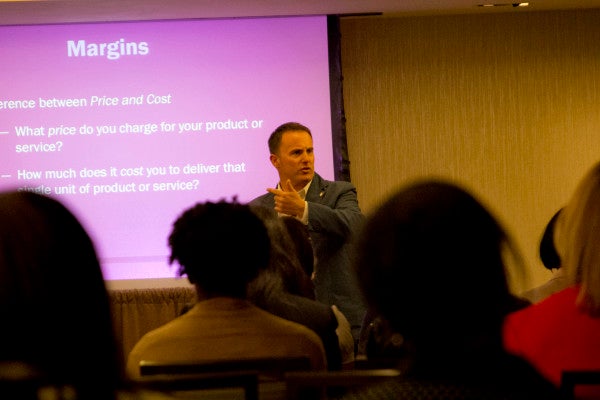 Hundreds of women veterans and military spouses filled the halls and conference rooms of a luxury Times Square hotel this past weekend in an effort to chart a daunting yet important step into the future.

The women were attendees of the V-Wise conference, which stands for “Veteran Women Igniting the Spirit of Entrepreneurship.”

“We’re all very proud. There’s a unique energy to every one and this one has been even more energetic than usual,” said Meghan C. Florkowski, the V-Wise program director in an interview with Task & Purpose, adding that the conference has “evolved through the voice of our participants.”

It’s a voice among the most marginalized in American society — women in the military. Just 2.6 million Americans served in Iraq and Afghanistan, fewer than 1% of the American population. Of those, only 11% were women.

In total, though, there are more than 20 million American veterans, and women account for just 1.8 million of that figure. But at this conference, there’s no feeling of marginalization or under-representation, only enthusiasm for the future.

“When you put a group of women together, we’re pretty powerful,” said Laurie Reid, one of the program participants. “And then you add that we’re veterans on top of that — oh, nothing’s going to stop us.”

Reid is the president of a Florida-based consulting firm called Breaking the Cycle, which focuses on helping families in which children have been charged with domestic violence toward their parent or caregiver.

An enlisted Navy veteran during the 1990s, Reid was one of the first women to serve on an aircraft carrier in the Persian Gulf. She said the thing she loved most about the conference — which separates it from other events — is the manner in which it follows up with attendees after the conference.

Indeed, part of the course offering is a post-residency mentorship with technical assistance and community-level help.

“They’re really fired up coming out of this conference. They’re going to go home and they’re going to get started, but there are obstacles and we want to make sure they have someone to turn to,” Florkowski said.

Reid said V-Wise, which features numerous panels and classes, including business classes from Whitman professors, was like a “firehose to the mouth of information.”

But she added, “I think as a small business owner, you really need to seek those resources out. Getting feedback is really helpful.”

Florkowski said that the important thing is ensuring these women, who have remarkable skills, experiences, and drive from their time in uniform, understand that there is a path for them, “and that they have those items in their tool kit that they need to take that path.”

Ultimately, the success of this relatively small group of women has potentially big implications for making an impact in the American economy.

“We’re giving them the opportunity to succeed in business,” Florkowski said. “They’re going to go forward and employ other people, so there’s a multiplier there.”

Through the conference, as is the case in much of the veteran community, there’s a feeling of shared responsibility and collectivism.

“They have a pretty powerful group now, once they’re a graduate,” Florkowski said. “After this conference we’ll have close to 1,300 graduates. We know that to be successful these ladies need to be supported beyond the conference.”

Indeed, it’s that support and feeling of community that Reid said she believes will be central to her success moving forward. She said that “women in the military veterans community have a respect for one another because we know instantly what that individual went through being in the military.”

Having transitioned out of the military in the 1990s, before the focus on veterans existed that exists now, Reid heralded the community support now available for veterans.

Florkowski had one message for women in the military community yet to attend V-Wise.

“[They should know they’re] going to have a voice, they’re going to be supported,” she said. “We want them to know if they want to take advantage of an opportunity to understand what entrepreneurship looks like, to build their toolbag with the tools they need to succeed, then the program is there for them in a very important way.”

For all service members, not just women, transitioning out of the military is a daunting challenge, one where men and women risk losing their sense of purpose from uniform.

“What do you do when you get out? The economy is not the greatest; school’s expensive; I’ve done all this training in the military, how does it really apply now?” Reid said. “There’s a lot of confusion. There’s a lot of unknowns about what your role is now in life, because you’re stripped of that identity that you felt so safe in doing. I think that’s the biggest thing.”