“Aren’t you that blogger guy?” I’ve been hearing it a lot recently. In years past, I was afraid those words... 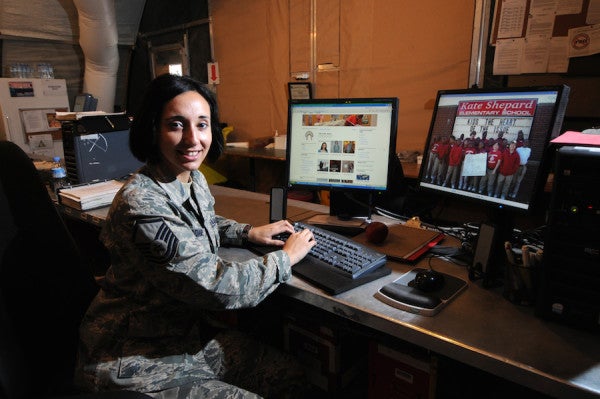 I’ve been hearing it a lot recently. In years past, I was afraid those words would be immediately followed by a stern lecture at best, a prompt firing at worst.

Fortunately, the U.S. military has done an about-face when it comes to blogging. Once verboten, the Defense department runs a social media machine rivaling most professional news outlets.

In addition to official military accounts, there’s a thriving online community of military and veterans affairs bloggers sharing their ideas and experiences through long-form blog posts, 140-character Tweets, Facebook pages, and even images. You’ll find them everywhere from established blogs like Small Wars Journal to up-and-comers like The War Council (and also here at Task & Purpose). Military bloggers have even loaned their pens to their pens to mainstream outlets like the New York Times and Foreign Policy.

Blogging is not just for aspiring geeks, either. Military and veteran affairs publications are moving more into the mainstream media as two wars come to a close and third one ignites. If you’ve thought about putting pen to pad (or fingers to keyboard), there are five reasons why right now is the time to do it.

Let’s face it — very few of us are naturally gifted writers. It takes years of practice and experimentation for an aspiring author to find his/her “voice.” But blogging can help writers hone their skills. In fact, I’d say blogging is actually more difficult than writing for publications; bloggers aren’t just writers, but researchers, editors, and social media managers — all in real-time.

Regardless of if you serve in the military, or work in the private sector, engineering or humanities fields, you’ll be expected to write clearly, concisely, and effectively. We’ve become increasingly reliant on written communication, sure, but we tend to do so in short text messages, Tweets, and even Internet memes. Plenty of writing, but not necessarily good writing.

Instead, long-form blogging forces writers to string together sentences and paragraphs — long enough to say everything that needs to be said, but short enough to hold the reader’s attention.

With practice, you may be able to turn your hobby into a career. Former Army officer Matt Gallagher, under the pen name “LT G,” ran a blog called Kaboom during the height of the Iraq War. Kaboom became so popular it had a following that purportedly rivaled that of small-town newspapers.

Sadly, Army brass put the kibosh on Kaboom — a consequence of the Army’s ham-fisted attitude towards blogging just a few years ago. Yet Gallagher has gone on to become a talented writer in his own right, lending his pen to the New York Times, and even running a workshop to help veterans improve their writing.

2. Your comrades need your ideas.

Do you read your branch’s official magazine? They’re hard to come by these days. In the 1990s, you could find stacks of Infantry Magazine or the Combat Training Center Bulletin in most company orderly rooms. Now, these publications are all but extinct. Like journalism, print is waning, while digital publications and blogs are on the rise.

Our armed forces are more experienced than ever — whether fighting in Iraq and Afghanistan, keeping peace in the Horn of Africa, or deterring adversaries in the Pacific. Today’s servicemen and women have incredible experiences, and have endured many hard-learned lessons. You owe it to your successors to pass along your experience to the next generation.

3. The American people need your stories.

Less than 1% of America serves in uniform, perhaps the lowest rate of involvement during any wartime period in American history. In some areas of the country, there are those who have never met a U.S. service member. Some may even be surprised that the United States is still at war in Afghanistan.

What most people know (or at least, think they know) about the military comes from Hollywood tropes, usually some combination of the troubled veteran (e.g., “Rambo”) or super-commando (Yup, “Rambo,” too) narrative. You may have gotten so frustrated with the litany of silly questions that you don’t even tell strangers about your service.

However, American service members aren’t brainwashed automatons or superheroes. Some join for college money, others because of family tradition, still others for the adventure. They come from all walks of life, and from all areas of the country. Military life is often frustrating, but most feel that it’s fulfilling. It’s a place you’ll find soul-crushing bureaucracy and life-long companions. For many, it’s dangerous, while others gripe about asinine safety regulations. But, for the most part, our men and women in uniform are ordinary people, who, when called upon, do extraordinary things.

Writing can help our military community shatter stereotypes and reach parts of America untouched by the last decade and a half of war. You owe it to all of us to reach out.

4. It’s easier than you think.

No HTML skills? No problem.

Ten years ago, budding bloggers on platforms like LiveJournal, WordPress, and Blogger spent countless hours designing their own sites. Every minute spent fixing their blog layout cut into the time they had available to actually, well, blog. Fortunately, sites like Medium make compiling and sharing a blog post much easier, allowing bloggers to focus on their content, rather than the presentation.

But blogging is more than just writing: it’s engaging.

If you want to improve your own blogging, read what other bloggers are writing about. Link to their posts on Facebook or Twitter, or pen a response to bloggers who may have said something insightful.

Today’s military bloggers are having important discussions; be a part of the conversation by both listening and speaking.

“When do you find the time to do all this?”

The truth is you have time to read and write if you make time. Carry a notebook to Green Ramp (trust me, you’ll be there a while), or cut back on a little television. Put away the cell phone for a few minutes and devote just a little time to reading and writing. This will pay dividends in the long run (cliché).