How Service Members Are Inspiring Thousands Through Podcasts

It’s 05:45 on a Monday morning. You’re in your car on your way to physical training formation, sitting in a... 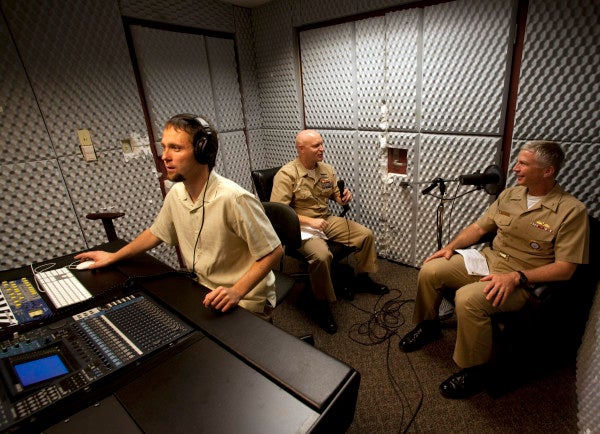 It’s 05:45 on a Monday morning. You’re in your car on your way to physical training formation, sitting in a mile-long line, creeping ever closer to the gate. Most of your fellow sitters-in-traffic are probably thinking about the day ahead of them: the emails they need to respond to, the training plans they have yet to submit. At least, that’s what you used to think about.

But if you’re transitioning out of the military, there’s a good chance you’ve got other things on your mind:

I really hope I hear back from that company; it’d be nice if the kids didn’t have to change schools. Do I even want a corporate job, though? Maybe I want to start something of my own. I should probably upload a LinkedIn profile picture. That’s probably why I haven’t heard back yet.

Although you’re officially given ample time to transition — 18 months if you’re separating, and two full years if you’re retiring — and you’re afforded plenty of opportunities to optimize your resume, learn how to dress for interviews, and even perfect your “elevator pitch” for networking events, it never feels like enough.

Luckily, there’s a growing number of military veterans on a mission to inspire you through those painful, wasted hours.

Individuals like John Lee Dumas, Damian Taafe-McMenamy, Timothy Lawson, and at least half a dozen others, are all combat veterans who have taken to the airwaves via podcasting, a form of audio media that you can download or stream from the Internet.

And though the podcasting industry first exploded about a decade ago when Apple introduced us to the iPod, the growing ubiquity of smartphones in the last couple of years has spawned dozens of audio apps like Stitcher Radio and Sound Cloud, making podcasts an increasingly popular media source.

So who are these veterans, and what do they want to do for you? In short, they’re entrepreneurs, men who have served their country, and are now looking to serve their audiences by providing valuable content about remarkable people.

Take Tim “Lawdawg” Lawson, a former Marine who’s been broadcasting Veteran Empire Podcast for more than two and half years under the auspices of the Veteran Empire lifestyle brand. He interviews creative veterans to help promote their careers with the goal of inspiring fellow service members and their supporters to do amazing things.

“The military gives you this commanding voice,” he said, when asked why more and more veterans are starting to podcast. Lawson has used his voice to launch three other podcasts, one of which, 1,2, Many, aims to raise awareness about veteran suicide, an important cause that he promotes offline through speaking engagements as well.

Meanwhile, Damian Taafe-McMenamy’s TheMilBiz Show focuses on enterprising military service members and spouses, an audience he felt compelled to serve because he happens to fall into both categories. An active-duty Army major with 12 years in service, Taafe-McMenamy wanted to prepare himself for his eventual retirement by studying business and entrepreneurship from men and women who have found success, so he just started talking to them.

“I figured the best way to learn was to ask other people about their stories for starting their businesses,” he shared. “I ended up sharing those stories with friends of mine who were still in, and I never felt like I could do those stories justice, so I figured, since I was already asking, why not record the conversations?”

Because John Lee Dumas and Tom Morkes, both former Army captains, are really just interested in entrepreneurship in general, they talk with successful business men and women from all sorts of backgrounds on their shows Entrepreneur on Fire and In The Trenches.

Dumas set himself apart by creating the first-ever daily podcast, an undertaking that he says he was able to master thanks to his military experience: “The Army taught me discipline, and it taught me Parkinson’s law, which holds that ‘tasks will expand to the time you allot them.’”

He now uses discipline and laser-like focus to confront Parkinson’s law head-on, knocking out eight-hour interviews every Monday. That allows him to take the rest of the week to work on other endeavors, like his most recent joint venture with Morkes and veteran Marine, Antonio Centeno.

With their new initiative, High Speed Low Drag, Dumas, Morkes, and Centeno are giving transitioning service members the advice and support they wish they’d received before leaving the military. On top of their online forums and classes, they publish a podcast twice a week, hoping to help veterans find meaningful work as they transition out of the service.

When asked why they started High Speed Low Drag, Centeno explained, “The military’s job is to fight and win wars. It’s not to transition guys out. It’s nice to say that it should be a focus, but when it comes down to it, the focus of your limited resources as a leader is on training your team and preparing for the mission, for deployments.”

As the military prepares to cut tens of thousands of service members from its ranks in the next few years, the pool of veterans looking for work is only going to grow. Taafe-McMenamy recommends using the time you have now to build something you love, rather than waiting until the day your transition leave starts (or worse, ends). “Because you have security in a bi-weekly paycheck,you can take the time to build something now and do it right,” he said.

The best part about all of these podcasts? They’re absolutely free. So whether or not you’re in the process of transitioning, download an app, subscribe to the shows that resonate with you, and spend your next commute to work (or wait at the doctor’s office, or time mowing the lawn) listening to veterans just like you, who are using their voices to inspire thousands.

Kirsten Baker is a transitioning Army officer who served a tour in Afghanistan with the 101st Airborne Division. She’s an Army wife, a mom, a writer and an editor. Follow her on Twitter.