The U.S. Army just moved one step closer to a new light tank intended to boost the firepower of airborne... 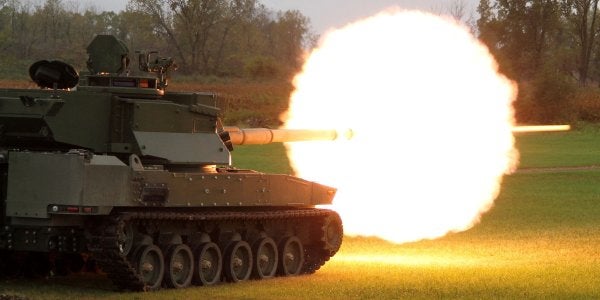 The U.S. Army just moved one step closer to a new light tank intended to boost the firepower of airborne and other light infantry units.

The Army is currently looking for a new tracked armored vehicle able to protect and support infantrymen as they “destroy the enemy in some of the worst places in the world,” Brig. Gen. Ross Coffman, the director of the Army's Next Generation Combat Vehicle Cross Functional Team, said Monday.

“This capability is much needed in our infantry forces,” he told reporters at a media roundtable.

The infantry has artillery, but “there's no precision munition to remove bunkers from the battlefield, to shoot into buildings in dense urban terrain,” Coffman explained. That is where Mobile Protected Firepower comes into play.

Two companies, BAE Systems and General Dynamics, have been awarded Section 804 Middle Tier Acquisition Rapid Prototyping contracts for this development project, the Army revealed Monday afternoon. Each contract is worth $376 million, and each company will provide a total of 12 prototypes.

The purpose of Mobile Protected Firepower is to “disrupt, breach, and break through” fortified defenses

The MPF, a 30-ton light tank expected to fill a critical capability gap, is one of five next-generation combat vehicles being developed by Army Futures Command, a new four-star command focused on preparing the force for high-end warfighting against near-peer threats in an age of renewed great power competition.

The Army, shifting its focus from counterinsurgency to high-intensity multi-domain operations with an eye on rivals China and Russia, wants contractors to deliver a vehicle that offers mobility, lethality, and survivability.

The MPF light tanks would provide the firepower to breach heavily-fortified defensive positions, potentially in an area, such as Russian and Chinese anti-access zones, where the U.S. might not be able to achieve absolute air superiority.

The final Mobile Protected Firepower light tank, which will be delivered to troops in 2025, will be a tracked vehicle with either a 105 mm or 120 mm cannon that can withstand an unspecified level of fire. The Army also wants to be able to carry at least two light tanks aboard a C-17 Globemaster III for easy transport.

BAE Systems presented a Mobile Protected Firepower prototype at the Association of the United States Army Annual Meeting & Exposition in 2016. BAE Systems' latest proposal is a variant of the original design.

“Our offering integrates innovative technology that reduces the burden on the crew into a compact design deployable in areas that are hard to reach,” Deepak Bazaz, director of combat vehicles programs at BAE Systems, said in a statement.

General Dynamics Land Systems displayed a technology demonstrator at AUSA 2016 as a starting point for discussions with the Army about its expectations for the MPF platform.

The company is currently playing its cards close to the vest with its latest proposal, offering only the following picture while clarifying that the vehicle pictured is not the company's exact offering.

“We are excited about this opportunity to provide the U.S. Army a large-caliber, highly mobile combat vehicle to support the infantry brigade combat teams,” Don Kotchman, the vice president and general manager of General Dynamics Land Systems U.S. Market, said in a statement.