Turns out the commander of the Army’s Maneuver Center of Excellence is not from Syria. 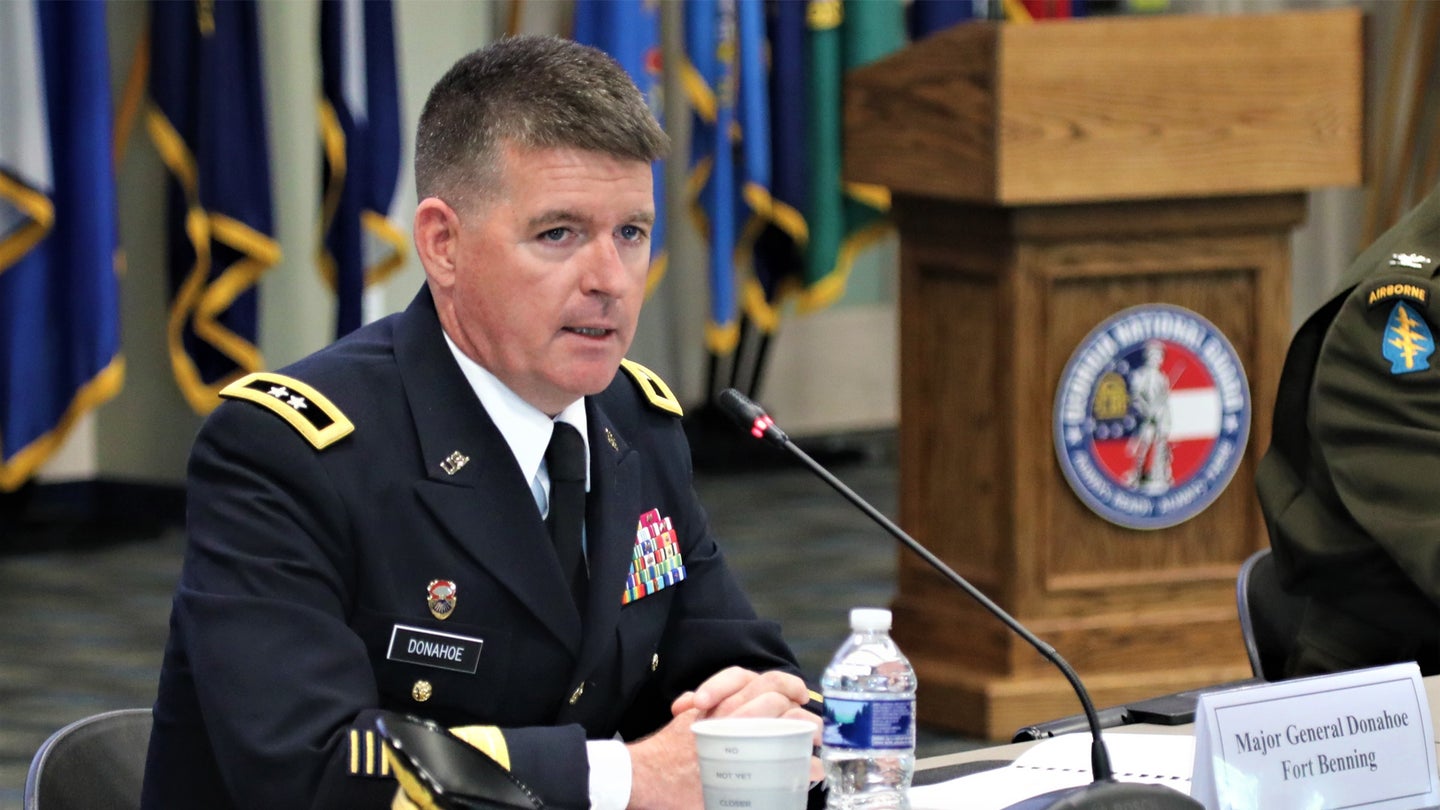 As you might expect, the commander of the Army’s Maneuver Center of Excellence at Fort Benning, Georgia, is not from Syria. But that’s not what at least one bogus Facebook profile said of Maj. Gen. Patrick Donahoe.

Donahoe, the two-star commander of the Maneuver Center of Excellence at Fort Benning, Georgia, posted a photo of a Facebook profile pretending to be…well, him. The profile said Donahoe was single, living in Austin, Texas, and originally from Damascus, Syria — quite a break from reality about the married New Jersey native.

While Facebook — which has renamed itself “Meta” — originally said the fake profile did not violate their community standards, according to Donahoe, he tweeted later the same day that the profile had been taken down. Meta has not responded to a request for comment.

It’s far from the first time online scammers have used the names and photos of military leaders to create fake profiles. Online romance scams in particular are so common, in fact, that the Army Criminal Investigation Division has an entire page dedicated to informing the public about what to watch for, and where to report fake profiles.

While romance scams are popular, other kinds of scams identified by the Army include identity theft, phishing, spam, and financial fraud.

“Army CID receives hundreds of allegations a month from victims who state they got involved in an online relationship with someone, on a legitimate dating website or other social media website, who claims to be a U.S. soldier,” CID’s website says. “The ‘Soldier’ then begins asking for money for various FALSE, service-related needs such as transportation costs, communication fees, marriage, processing and medical fees. Victims of these online scams have lost hundreds of thousands of dollars, with a very low possibility of recovery.”

Oftentimes a scammer posing as a deployed U.S. soldier will ask someone for money. The scammers are typically from other countries, “most notably from West African countries,” according to the Army, though that isn’t always the case. In 2017, a man and woman from South Carolina and Michigan, respectively, were sentenced to prison after defrauding young Marines by convincing them to take out loans from Navy Federal Credit Union and transfer the money into another account.

Col. Daniel Blackmon, commander of the 434th Field Artillery Brigade, has shared photos of multiple Instagram accounts pretending to be him. While most of the accounts have sketchier bios — one simply says, “Won’t get at u if u don’t do same” — another uses almost the exact bio that the real Blackmon uses on Twitter, but changed “husband” to “widowed.”

In 2020, scammers even impersonated Army Gen. Paul Nakasone, the head of U.S. Cyber Command. Impersonating a man whose entire job revolves around cybersecurity and technical surveillance is a particularly bold move.

As CyberScoop reported, women were contacted by a Gmail account masquerading as Nakasone “from an outpost in Syria,” after first messaging with a Facebook account posing as Gen. Stephen Lyons, head of U.S. Transportation Command. The fake Nakasone flirted with the women in a likely attempt to lay the groundwork for a romance scam.

When CyberScoop contacted the email address posing as Nakasone for the story, the person responded that they were “sending my troops to get you.”