Why are Americans forced to feel the same fear that I did as a soldier in Iraq?

We shouldn't have to live like we are deployed in a combat zone. 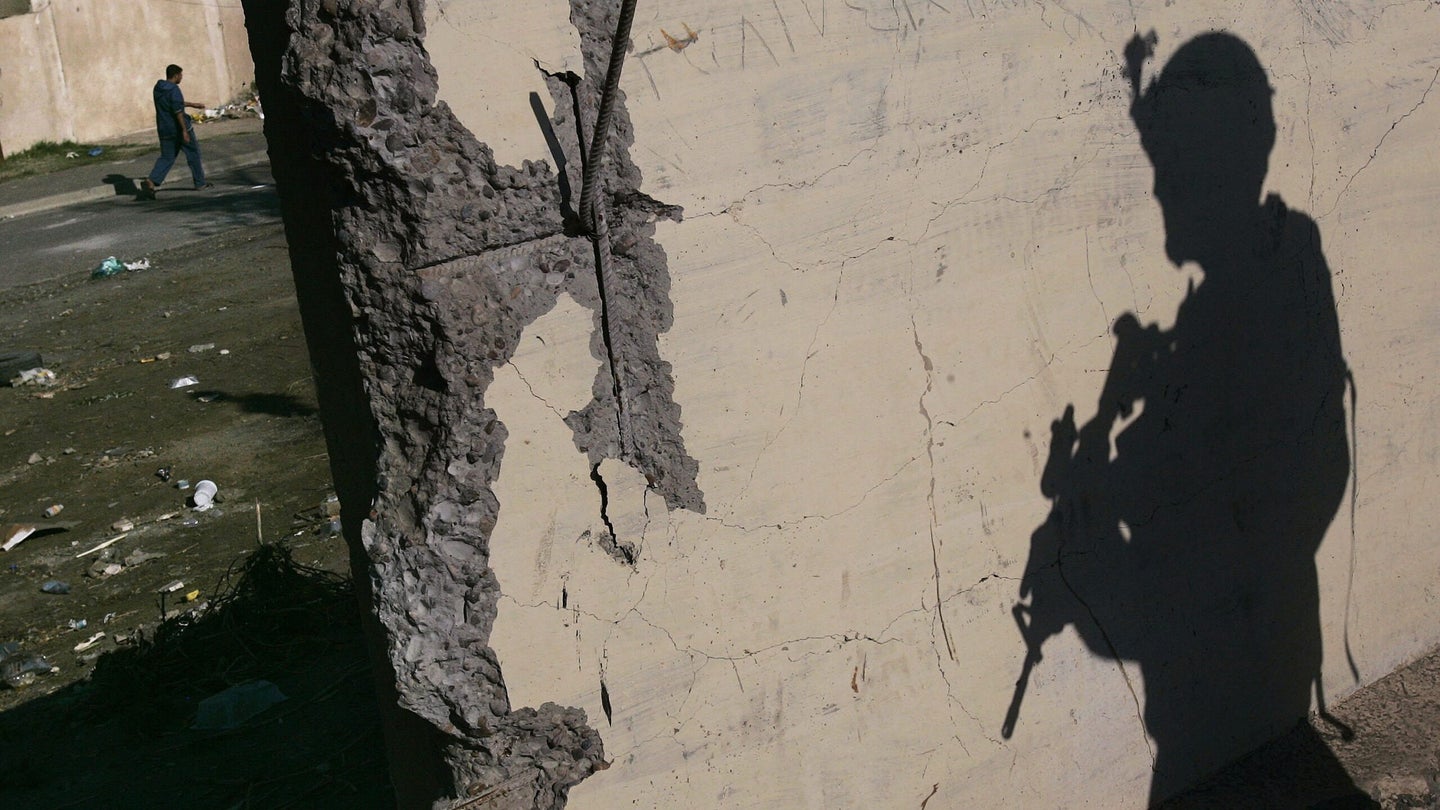 A U.S. Army soldier with Task Force Dagger stands watch while a man passes by in the distance on December 1, 2006 in the Hurriyah neighborhood of Bagdhad, Iraq. (Chris Hondros/Getty Images).
SHARE

The entire United States Military Academy Corps of Cadets (roughly 4,000 men and women) eats meals together in a massive, open mess hall. At the center of it all is what remains of an early structure of the academy; an open balcony that overlooks each of the thousands of cadets at their 10-person tables.

During lunch, it is common for an appointed cadet to ascend the balcony, grab a microphone, and make announcements that pertain to the entire Corps. “Attention to orders,” the cadet will lead in, and at once, thousands of conversations and clinking utensils will drop silent. The announcing cadet then passes along the relevant information of the day.

I attended and graduated from the United States Military Academy – West Point – during a time of war, as did tens of thousands of future officers over the past two decades. When I started in 2002, the United States had forces in active combat in Afghanistan. In the spring of my first year, we invaded Iraq. As my time at West Point progressed and the wars escalated, so did the number of my friends and acquaintances who had gone into the fight.

During that time, I came to brace myself for the sad new reality of the lunchtime announcement: the persistent expectation that it may bring news of the death of another graduate — a leader, mentor, and friend to those of us still wearing cadet gray. “Attention to orders…the Corps mourns the passing of…” a graduate of the Academy who was killed on combat operations in Iraq or Afghanistan, a fellow cadet would say. This was the announcement each time a death had been made public.

Lunch felt more serious for me after the first time a mentor of mine was killed. There seemed to be a daily moment when 4,000 of us would collectively hold our breath and hope that the next words after “attention to orders” wouldn’t be “the Corps mourns.”

Personally, I came to accept it as a sobering reminder of the serious work I had agreed to take on: leading people in the execution of the policies of our elected leaders. It was a way of maintaining focus, and honoring and revering the fallen and those who still served. But I simultaneously felt deep guilt for the thought that came to mind with every announcement — “the Corps mourns,” the announcer would say, and I would think, “I hope it’s not someone I know.”

Time has passed, and with it the march of sad news; many more friends, teammates, or even just familiar faces have met their end in service to our country. I have been out of the Army for years now, but I still carry the same sense of dread I did as a cadet. The lunchtime announcement has been replaced by the unexpected text from someone I haven’t spoken with in years. “Hey, do you have a minute to talk?” they often read, leading me to think, “I wonder who died.”

I have come to accept this feeling. I chose to enter the military and, thus chose to build some of my closest relationships with people who are disproportionately exposed to the risks of military service.

But I do not believe that every American should have to live with this lingering fear. Nor should we have to live like we are deployed in a combat zone.

I entertained the prospect of death every day during my deployments to Iraq and Afghanistan. I mitigated risk as much as possible for my soldiers before leading them on missions. I prepared letters for a friend to share with my wife, unborn son, brothers, and parents should I die. I even indulged in rituals – a prayer hanging by the doorway of my sleeping quarters that I would read every time I left, or a rubber band around my wrist when I was back home to remind me to think about my friends in harm’s way.

Now it feels like the mentality I had while serving has returned. I feel things that I felt when I was at war; when I’m thinking about what I will do with my family this weekend; when I am out and about with them. Where would a shooter start his attack? Where is the best place for me to put my children behind cover? Are my friends and relatives safe right now, wherever they are?

Just a few weeks ago, we saw yet another hate-filled person with legal access to war-making equipment end 10 lives, and destroy an unknowable number of others, right here on American soil. Afterward, I began a mental inventory of friends and colleagues – who do I know who is from Buffalo or has loved ones there?

It was not the first time I have felt this dread and frustration. I have a friend whose family belongs to a synagogue in Pittsburgh. In October 2018, when I heard the news of the domestic terrorist using a legally-obtained assault rifle to attack the Tree of Life Synagogue, my heart immediately sank as I fumbled to grab my phone and reach out to my friend and make sure he and his family were safe (thankfully, they were).

I live in Colorado. Last year, after the Boulder supermarket shooting, I got out my phone to start checking on people who lived or worked in or near the town, feeling the same selfish feeling that causes me so much guilt: “I hope nobody I know died.”

My brother is gay. After the 2016 mass shooting at a bar in Orlando, I would lay awake wondering if someone with a problem and a weapon of war would happen across one of my brother’s hangouts where he lives.

Even more important to consider are children, targeted and slaughtered across our country for decades, with nothing done to stem the ever-rising tide.

Sometimes, the oldest of my three children comes home from school and casually remarks, “we did a lockdown today.” His school is a few miles away from STEM School Highlands Ranch, the site of a school shooting in 2019. He asked me once a few years ago, “I’m not going to die for a really, really long time, right?” A lump welled in my throat as my immediate and unspoken reaction was that I had no way of guaranteeing that.

The other night, following the mass murder at an elementary school in Uvalde, Texas, I had to try to help my son process what happened earlier in the day. It was our first open conversation about mass shootings. He was focused on the tactical — “what should I do if I’m in the bathroom alone when there’s a lockdown?” — as he cried for the children who had been murdered earlier in the day.

The next morning, I wept in my car after seeing my children off for the day. It made me think of people saying goodbye to loved ones as they embarked on deployments.

And so I, and I would assume many people like me, live with this dark cloud of dread in the back of my mind. Somewhere out there right now, the next mass murderer is building up the resolve to do the unspeakable. Maybe he is deranged, maybe he’s just grossly misled and emboldened by the enlivened presence of misinformation in our country. Regardless, he will get a military-grade weapon, and limitless ammunition, walk into a public space, and destroy countless lives. Will the next lives belong to people I know?

This cloud of dread is accompanied by frustration and outrage. Our society is under attack by domestic terrorists who are armed with inexplicably protected weapons and fueled by ridiculous rhetoric and theories that blossom in our point-scoring political environment. We are all now, to a degree, at higher risk as we live under the policies and leadership of elected officials that fail to protect us.

Those officials have made no real movement to protect us from these terrorists, and moreover, they confoundingly enable them. They protect the ability for people to own weapons of war in the face of an 81% majority of our citizens who want mandatory background checks and nearly two-thirds who want an outright assault weapons ban, according to Pew Research Center.

I volunteered for a life where I would have to think tactically about what to do under fire. My eight-, five-, and four-year-old children did not. I volunteered to become part of a profession in which I would come to know, respect and love a disproportionate number of people who met violent ends. My neighbors did not. Yet these innocents are being asked — implicitly and sometimes explicitly — to bear the unbearable, while those with the power to change our lot for the better continue to do nothing.

We are all at risk, and an overwhelming majority of us have specified how we want that risk reduced; why are our leaders permitting these attacks to continue?