Disgruntled with the U.S. Veterans Administration, a veteran set himself on fire Tuesday outside the state Capitol in downtown Atlanta,... 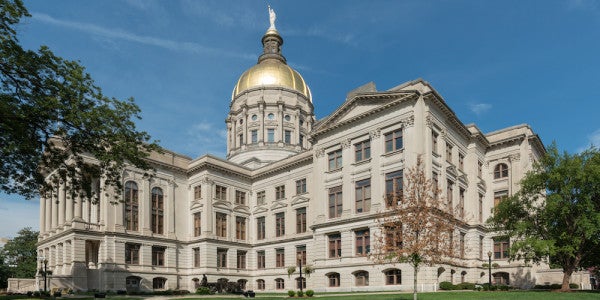 Disgruntled with the U.S. Veterans Administration, a veteran set himself on fire Tuesday outside the state Capitol in downtown Atlanta, according to the Georgia State Patrol.

About 10:45 a.m., the 58-year-old Air Force veteran from Mableton parked a Nissan Sentra on Washington Street, stepped out of the car and walked toward the Capitol, GSP Capt. Mark Perry told The Atlanta Journal-Constitution.

“He was strapped with some homemade incendiary devices (and) firecrackers, and doused himself with some kind of flammable liquid” before lighting the fireworks, he said.

Several loud explosions were heard, and a trooper quickly put out the fire with an extinguisher, according to authorities.

The veteran was rushed to Grady Memorial Hospital with burns over 85 to 90 percent of his body. His name has not been released.

No other injuries have been reported.

The Capitol and judiciary buildings have been evacuated. Workers were forced to move children from a daycare associated with Central Presbyterian Church to a neighboring Catholic church as a precaution.

Officials are still looking for potential additional threats and roads around the Capitol are closed. The veteran has a sign in his car windshield saying to call a number on it.

Officials fear calls to the number might set off another device.

Multiple agencies are on the scene, including the GBI bomb squad, which is examining the Nissan.

The Bureau of Alcohol, Tobacco and Firearms is en route, too.