Jon Stewart: Wounded Warriors Are ‘Slightly Better Versions Of Us’

Once a year, the Warrior Games bring together wounded, injured, and ill servicemen and servicewomen to compete in multiple sporting... 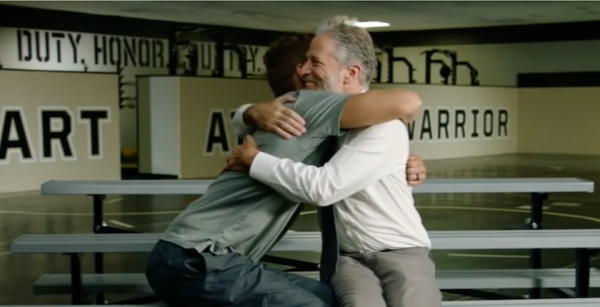 Once a year, the Warrior Games bring together wounded, injured, and ill servicemen and servicewomen to compete in multiple sporting events, including archery, cycling, sitting volleyball, and wheelchair basketball. Organized by the Department of Defense, the 2016 games were held at West Point in June and hosted by comedian Jon Stewart. According to Military Times, it was Stewart’s third military-related gig in three months, and it was evident in his opening speech that the former Daily Show host’s admiration for veterans is both genuine and personal.

“I have to be honest with you,” he began. “I didn’t come up here to support these athletes. I came up here to get support from them.”

ESPN chronicled Stewart’s time at the Warrior Games in the 10-minute video below. In a surprising departure from the political lampooning he’s best known for, Stewart interviews several of the athletes, praising them for their service and discussing the hardships they overcame to compete on that level. Describing the 250 athletes who participated in the games — some of whom were injured in training, others in combat — he says, “They’re not superheroes; they’re not the X-men. They are us. Just slightly better versions of us.”

That’s certainly an assessment we can get behind.