Russian Lawmaker Wants To Make Soccer Hooliganism Its Own Sport

With the 2018 FIFA World Cup set to be held in Russia, concerns about hooliganism are beginning to take hold... 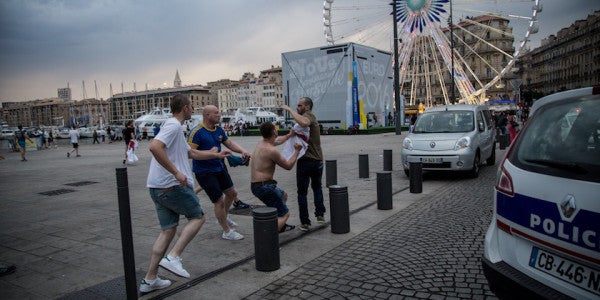 With the 2018 FIFA World Cup set to be held in Russia, concerns about hooliganism are beginning to take hold —and justifiably so. After all, weapon-wielding Russian soccer fans left dozens of Englishmen injured in the French city of Marseille during last year’s European Championship. So how do the Russians plan to ensure the same thing doesn’t happen on their home turf? One lawmaker has proposed a solution that is so crazy it just might work: make hooliganism a legal spectator sport.

The man with the plan is Russian parliament member Igor Lebedev of the nationalist LDPR party, who drew up rules for what he’s simply calling “draka,” the Russian word for “fight,” the Associated Press reports.

The rules: 20 fighters on each side. No weapons. Everyone beats the shit out of each other. People get to watch.

This, Lebedev believes, will help protect peaceful soccer fans from stray fists and crowbars while also ensuring that the fighting doesn’t get out of control, as it did in France.

“English fans arrive, for example, and start picking fights,” Lebedev said in a statement on the LDPR party’s website. “And they get the answer — challenge accepted. A meeting in a stadium at a set time.”

Lebedev may be motivated by more than a desire to keep people safe, however. He’s a bit of a fight fanatic himself. After the massacre in Marseille, he lauded his countrymen for laying waste to the English — whom he characterizes as unruly and poor fighters — with these encouraging words: “Well done lads, keep it up!” Lebedev’s longtime associate, fan leader and far-right activist Alexander Shprygin, was deported from France for his role in the brawl, which left one 50-year-old English soccer fan with severe brain injuries.

Lebedev seems to believe that the world shares his appetite for extreme, soccer-inspired violence. In making his case for turning hooliganism into a spectator sport for the 2018 World Cup, he hypothesized that an organized fight between rival fan groups could draw crowds of thousands (and, yeah, it probably would). “Russia would be a pioneer in a new sport,” he said.

Of course, throwing a bunch dudes into an arena so they can beat each other unconscious in front of thousands of people is nothing new. Check this out.