Sig Sauer has launched a commercial version of the lightweight M18 pistol currently in use by the U.S. military 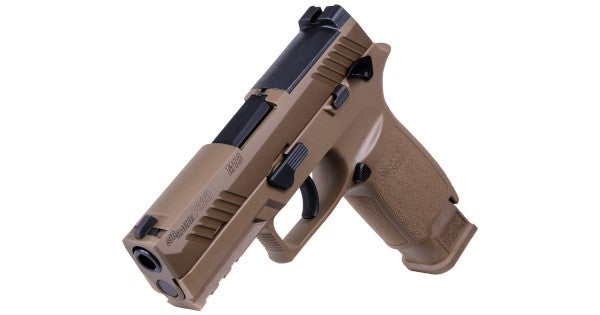 Sig Sauer has launched a commercial version of the lightweight M18 pistol that the U.S. military recently adopted.

Built on Sig’s P320 platform and billed as the P320-M18, the pistol “is configured nearly identically to the U.S. military’s models,” Sig Sauer said in a press release, featuring black controls and a coyote-tan grip module, PVD finished slide, and ambidextrous manual safety.

The Army officially adopted the 9mm striker-fired pistol as a compact variant to the full-sized M17 under the service’s Modular Handgun System program in January 2017.

With a 3.9 inch barrel and overall height of 5.5 inches, each pistol comes with one 17-round magazine and two 21-round magazines, as well as an exclusive “M18-XXXXXX” serial number, according to the company.

“Since the official selection of the M17 and M18 by the U.S. Army for the Modular Handgun System (MHS), we’ve seen significant civilian interest to own both variants of the handguns,” Sig Sauer chief marketing officer Tom Taylor saidin a statement. “The P320-based M17 and M18 are among the most tested handguns in history and the pair has been proven to be unmatched in both accuracy and reliability.”

Sig Sauer’s announcement comes on the heels of the October delivery of the company’s 100,000th M17/M18 handgun to the U.S. military.

While the Army plans on purchasing 195,000 MHS pistols, the majority of them will be the full-sized M17 model. By contrast, both the Air Force and Navy are scheduled to purchase purchase 130,000 and 60,000 M18 handguns, respectively, while the Marine Corps has adopted the compact pistol as its official sidearm

Find out where you can score your very own M18 at the Sig Sauer store here.